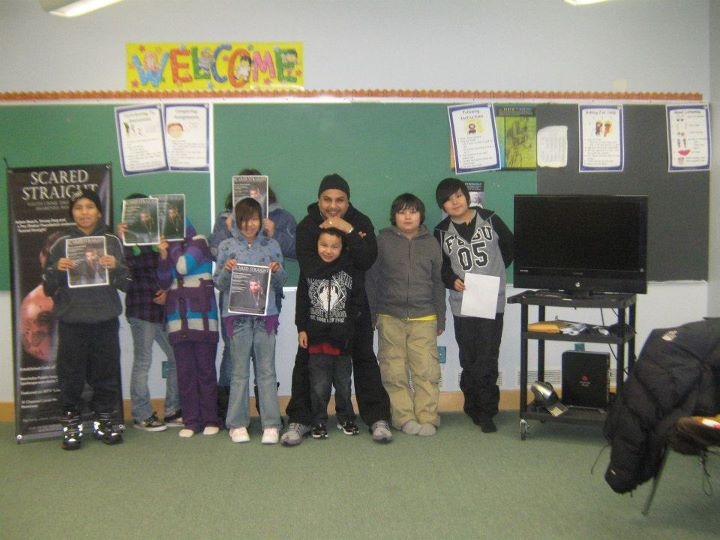 James Lathlin knows the street life all too well and he has the scars to prove it.
After moving from the Opaskwayak Cree Nation reserve in The Pas to Winnipeg when he was a young child, Lathlin became involved with gang culture, from drug dealing to armed robberies. At one point he was affiliated with the infamous Hell’s Angels gang.
Then one day, outside his family’s house, he was shot by a rival gang. He was sent to the Stony Mountain Penitentiary hospital, where he spent two years for his gang activities.
While serving time, Lathlin had a revelation about his life.
“I realized that education was gonna be the way I can make it out,” he said.
He earned his high school diploma, wrote a book, and upon being released from prison, took a public speaking course at Red River Community College and began taking his message to the community.
He was inspired by a video he watched while in prison.
“I watched this video in the 70s called Scared Straight, and the guys in it were criminals, young kids,” he said. The youth were shown the harsh realities of prison and gang life, and by the time they were adults, nine out of 10 were living a happy life.
“It made sense to me. I always kept that in the back of my head,” Lathlin said.
Scared Straight is the name of Lathlin’s program, in which he presents the realities of gang life in schools, using his life story to scare kids away from gangs. He does so through his stories and his scars from being shot and stabbed.
Lathlin has taken Scared Straight across Canada and parts of the U.S., and has the endorsement of notable rappers such as Snoop Dogg.
Lathlin also gained the support of actors Adam Beach and Dakota House, who both had experiences with crime, drugs or gangs in their youth.
Lathlin and House took the Scared Straight program to Marten Falls First Nation on Jan. 25.
Norma Jean Achneepineskum, director of education for Marten Falls, said Eabametoong First Nation recommended Lathlin after they hosted Scared Straight in November 2011.
Achneepineskum said the community was immediately interested in the program “because our school had noticed there was a lot of issues that had to be addressed in regards to bullying with the kids that are getting ready for high school, and so they can be prepared for when they leave home.”
Leaving the reserve to pursue education is often a necessity for many First Nations people, including Lathlin. His family had moved to Winnipeg because his mother wanted to pursue an education as a nurse’s aid. Because she was often out studying, Lathlin had to take on the parenting role for his younger sister.
“I had to become a father figure to her,” he said.
This directed Lathlin’s focus away from school, and he began dealing marijuana to help make ends meet. As his drug dealing reputation grew larger, gangs took interest.
“It was basically like ‘OK, you’re gonna work for this guy now.’” Lathlin said.
In addition to drug dealing, car theft, and armed robbery, Lathlin became a runner for Hell’s Angels. Over the course of his affiliation with gangs, he has been shot and stabbed numerous times. He has scars on his calves from when a machete was thrown at him, and another from being cut on the arm and torso. He has a scar on his abdomen from being shot. He was also shot in the face, though it’s difficult to tell that he had his jaw reconstructed.
“I’m lucky to have my nose and jaw,” he said.
When he makes his presentations, he asks the audience if they want to see his scars.
“And they’re like ‘yeah, yeah!’” Lathlin said. “And when I ask, ‘Are you ready?’ – dead silence.”
Lathlin typically begins his presentations with jokes, demonstrating breathing techniques, and trust exercises. Then he shows a video telling his story.
“Then I talk, and then we all talk. They tell me their story,” he said.
In Marten Falls, he did a morning presentation to youth at the school and then a presentation to teachers, parents, frontline workers and any community members in the evening.
Achneepineskum said the presentations were well received by the community.
“They told him it was a very informative and interesting workshop and presentation,” she said. “Hopefully we can learn from this and use the knowledge as a tool for the kids when it comes to issues they have to face in regards to bullying and gangs.”
Lathlin’s main message to the youth is about education.
“No one can take it from you,” he said. “Life is an obstacle, but your education will always be there and it will provide you with food, shelter, and clothing.”
Anyone interested in Lathlin’s story or program can look him up on Facebook or Youtube.