Laughter ‘is in our DNA’ 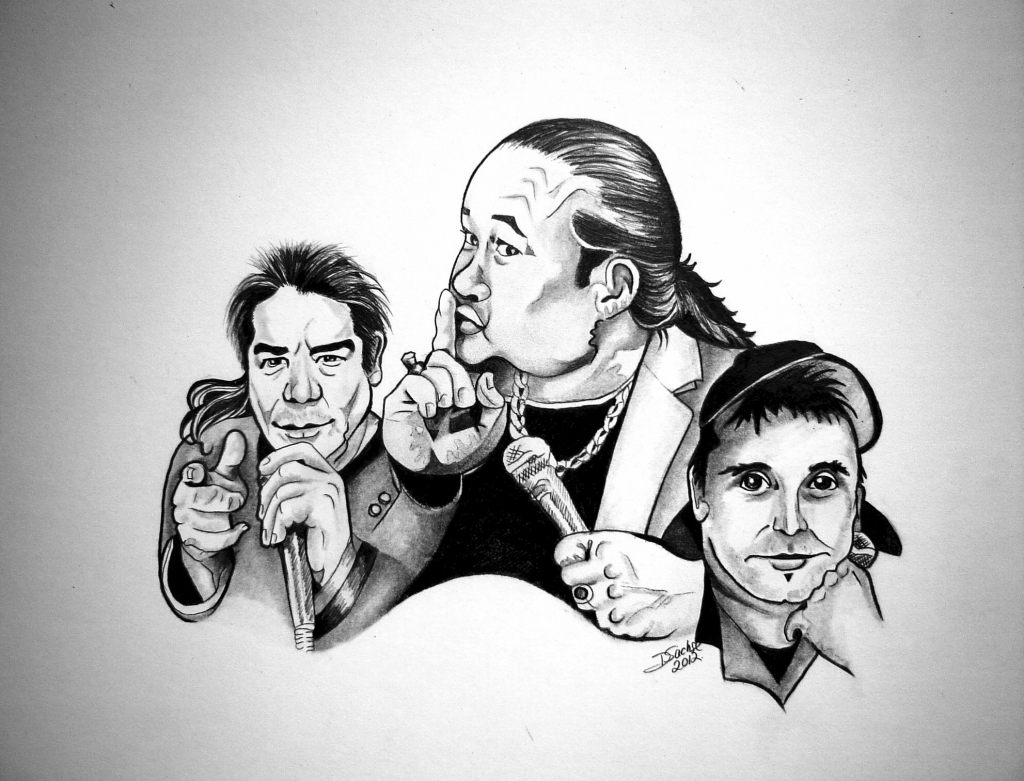 Laughter is something you are most likely going to hear when you are around a group of Anishinaabe people.
Your first reaction may be to smile too, because laughter is contagious. It is good to witness anyone laughing, whether they are Anishinaabe or not. Being able to tell a joke and make others burst out laughing is a natural talent possessed by many Anishinaabe people.
Three Anishinaabe comedians, all at varying stages in their comedic-careers, recently shared their thoughts on what it is that makes Anishinaabe people so capable of seeing the humour in everyday life.
Todd Genno, Ron Kanutski and Don Burnstick all use humour and laughter as a way to brighten the lives of others, and they also use it as a way of healing through social work and counseling. Genno is a social-work student in college; Kanutski runs his own private counseling service, and Burnstick tours North America with his different workshops in order to help heal the masses.
Genno, an budding stand-up comedian from Pic River First Nation, remembers himself as a young boy out to make people laugh.
“I’ve always tried to be funny growing up, even if it was annoying or not,” Genno said. He explained that in his life there was always a group of friends he could have a good laugh with when they hung out together. Laughter was something that was always on the menu for he and his buddies.
On April 27 of this year, Genno was crowned winner of Thunder Bay Comic Idol. Since his win, he’s been making appearances at local clubs and bars in Thunder Bay during open mic comedy nights.
“I get great joy from making people laugh. It’s the greatest feeling in the world walking off the stage knowing you made the crowd laugh,” Genno said.
Lake Helen’s Kanutski also knows the feeling that comes from making people laugh; Kanutski took home the 2010 title of Thunder Bay Comic Idol. Kanutski does stand-up comedy when he can, as well. He remembers those who made him laugh the most when he was a kid growing up.
“My brother used to make satire out of everything; he was always like rewriting the words for songs, the way Weird Al Yankovic does and he would make them inappropriate. He was really funny to me,” Kanutski said.
He fondly remembered an old friend who used to get him into trouble at school.
“He used to make up the funniest things. It’s hilarious to see him now because he works at Nodin and he’s all serious and stuff and professional. I used to get strapped so much in school because he would make me laugh so hard,” Kanutski chuckled.
Kanutski said that storytelling was always a form of entertainment for Anishinaabe people. He still remembers his early life without television.
“We grew up without a TV, so storytelling was a form of entertainment for us. Life would have been really bland without it. Storytelling was natural, we were born entertainers,” Kanutski said of Anishinaabe people.
Genno said that in the past, Elders would tell stories in the winter months. Some stories would take three to four days just to finish, and served as a way to pass on key life lessons and messages. The Elder storytellers often used humour to get their points across.
Burnstick, of Alexander First Nation, said that humour is “in our DNA” as Anishinaabe people.
Burnstick, who’s been in the comedy game spanning across three decades, said that it is important for the mainstream media to let the world know Anishinaabe people aren’t just serious and engulfed in tragedy.
“New TV shows don’t portray natives with a real strong sense of humour,” Burnstick said. “Blackstone is a good show, but it is one aspect of who we are. It doesn’t show us being funny, it shows us in crisis.”
“The strongest people I know have a good sense of humour,” Burnstick said. “The wisest, most traditional Elders I know have a strong sense of humour, they know how to laugh.”
Burnstick explained that a sense of humour is an important and vital part of who Anishinaabe people are. He said that Anishinaabe people have always been able to laugh through crisis situations. “Like at funerals, you will see sharing and crying and laughing – it’s the essence of who we are as a nation.”
Genno too feels that a sense of humour is important and that laughter is a necessity. He stated that laughter is healing.
“Laughter is very important, I can’t imagine a life without it. Laughter can make anyone’s day better,” Genno said. “When we are laughing, it makes us forget our troubles for the time being.”
Kanutski expressed a similar sentiment when it came to the importance of humour and laughter in Anishinaabe culture and history.
“Our humour is something that comes from tragedy, its part of survival,” Kanutski said. “Laughter is a natural healing medicine, it stimulates the heart and breathing. Laughter kept our people alive, it kept us alive and helped push us forward.”
Genno is booked (or at least he will show up in hopes they let him on stage) at the Finlandia Club Comedy Show in Thunder Bay this November.
Kanutski can be found online at: www.ronkanutski.com, and is available for workshops and shows (and long walks on the beach).
Burnstick received some free pop and did stand-up at the Grand Portage Casino on Aug. 10.