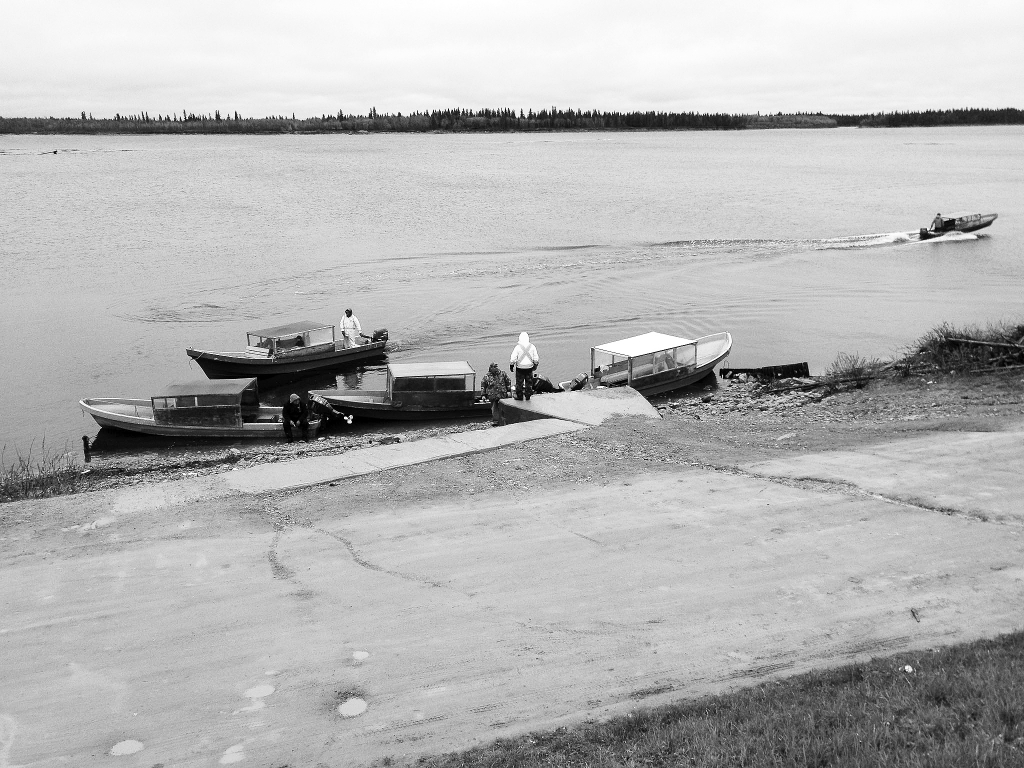 The lack of public docks along the Moose River in Moosonee is drawing concern from residents in Moosonee and Moose Factory.
Sue Clark, a facilitator with the Aging at Home program, which works to provide resources for Elders to be able to remain in their home, says some clients are unable to make medical appointments or visit relatives at the Weeneebayko General Hospital in Moose Factory because the lack of public docks make it difficult for them to board a boat.
“You know what it’s like going down the bank and getting on the shore, and they can’t get into the boat because they’re too frail,” Clark said. “Some of them say, I can’t go over, I can’t make it to my medical appointments.”
The Aging at Home program serves many Elders in the Moosonee-Moose Factory area, including 15 Elders who are 85 years old or older.
“If they went to the hospital to visit somebody who’s sick, they have a very difficult time going because they can’t get in the boat,” Clark said.
Moose River separates Moosonee and Moose Factory and residents often take taxi boats to shuttle between the communities. Along with visiting family or friends, residents from Moosonee often need to attend medical appointments at the Weeneebayko General Hospital in Moose Factory while Moose Factory residents go to Moosonee to shop or board the train that goes south.
The Moosonee public docks had been installed by Transport Canada until four years ago, when the responsibility fell to the Moosonee town council to fund its installation and maintenance. Last fall, the council decided it would no longer install the docks unless “users” of the docks - namely the taxi boat drivers - would each pay a fee of $400.
Moosonee councillor Bob Gravel said it costs $4000-5000 a year to install and maintain the docks, which the town paid for the past few years. Since there are about 10-12 parking spots available on the docks, the $400 fee paid by each taxi driver would cover the costs.
“We’ve been trying to implement this for the past four years and we’ve had a lot of resistance,” Gravel said. “I’m trying to explain to people that the town can’t keep taking it out of general revenues.”
Gravel said the town has a limited budget, struggled last year and cannot afford to keep paying for the docks.
“It is adding up, and it’s unfair to the taxpayers,” Gravel said. “So what we’re trying to do is recover the costs by having the users pay a nominal fee and this is not uncommon to any community in Ontario.”
As of May 31, Gravel said only two boat drivers have paid the fee and the council would like at least 75 per cent of the docking fees to be paid before it installs the docks.
Since taxi boat drivers are unlicensed, some residents and boat drivers have questioned how the town will ensure that only those who paid will have a parking spot on the docks. But Gravel said there is by-law enforcement in the town.
“We understand it’s going to be tricky, but we do have by-law enforcement capability,” Gravel said.
Gravel said he has to take a boat everyday and understands the concern of the community members.
“It’s not the safest, but...from a risk-management standpoint, we have checked with our insurers and we feel this is the right way to go, though we don’t have the best comfort in pursuing this.”
He has even witnessed “almost daily” the difficulty of some elderly passengers in boarding the boats.
“It’s very unfortunate and I’m very uncomfortable with that,” Gravel said. “But again, the position of the town is that we just cannot continue to pay out of the general revenues of the town to pay for these docks.”
Gravel said the council “may bring this back to the table and reexamine it” at the next council meeting, which is June 11.
In the meantime, residents and hospital patients will have to continue to board boats without a dock, and it will involve a lot of risk, Clark said.
“Last week, there was a gentleman who was discharged from the hospital and he had bilateral amputations and he had his artificial legs on, and he had to come on the boat and make his way out of the canoe and go up the bank,” Clark said. “It really puts (the Elders and patients) at a high risk for fall and they could sustain fractures. It’s not safe at all.”