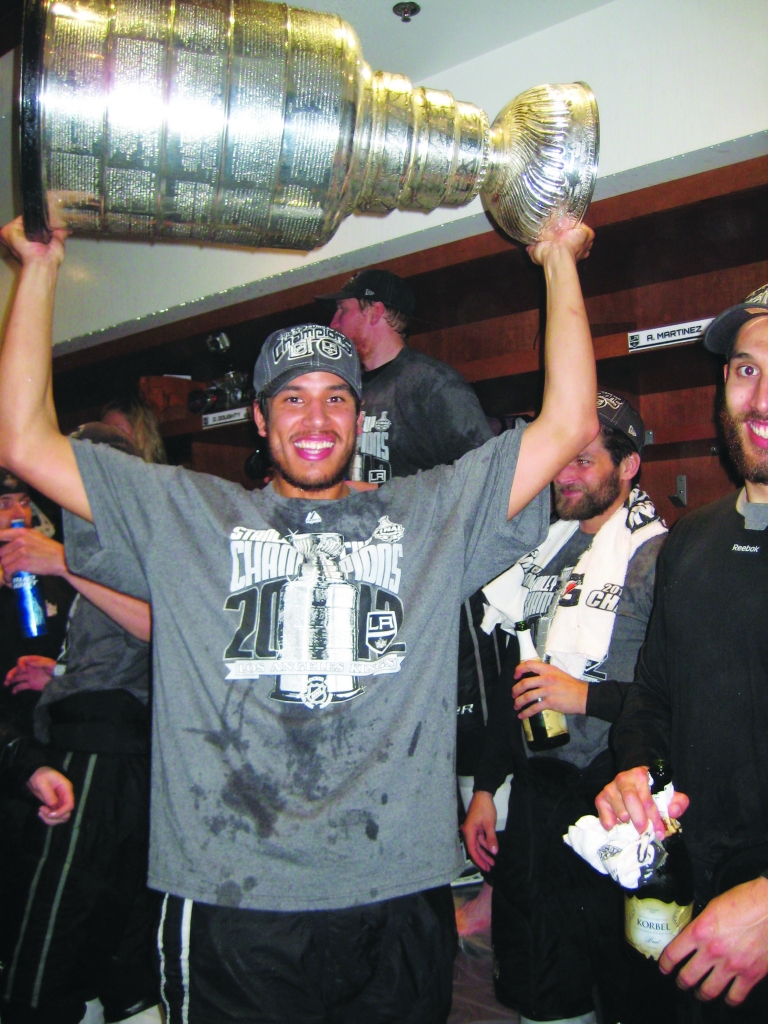 The Stanley Cup is coming to Garden River First Nation this summer.
Garden River’s Jordan Nolan was on the ice during the final minute of Game 6 in the Stanley Cup Final on June 11 where the Los Angeles Kings led the New Jersey Devils 6-1 in the game and 3-2 in the series.
In Garden River, “just about the whole community” had gathered at the recreation centre where a projector was set up to broadcast the game.
“The countdown at the game (in the last minute), it was more exciting than the New Years Eve countdown at Times Square,” said Jordan’s aunt, Barbara Nolan. “It was more than that.”
As the score clock ticked down to signify the end of the game and crown the Kings as Stanley Cup champions, the crowd in the recreation centre erupted in cheers.
“Oh, the community just went wild,” Barbara said. “It was just filled with some awesome good feelings.”
Barbara’s husband Tom Nolan, brother of Jordan’s father Ted, said it was “great’ to watch the game with the community.
“It felt like we were at the game,” Tom said. “Every time they put the camera on Jordan, the fans went crazy.”
Tom said it was “unbelievable” to watch Jordan raise the Cup during the on-ice celebrations. Barbara said a news reporter was at the recreation centre and tried to speak with Tom after the game, but he could not talk.
“He was all choked up,” Barbara said. “He was close to tears.”
Garden River began to experience ‘LA fever’ in February when Jordan and Dwight King, a Metis, got called up from the Kings’ farm team, the Manchester Monarchs, to join the club in the playoff race. Jordan scored his first NHL goal in his second game against the Dallas Stars.
Standing at 6 feet 3 inches and weighing 227 pounds, Nolan brought speed, size and grit to the club, playing on the fourth line as a winger. He finished the regular season with 28 PIM and 59 hits in 26 games to go along with his two goals and four points.
The Kings barely made the playoffs, finishing eighth in the Western Conference, but went on to dominate the post-season. They swept last year’s Stanley Cup finalists, the Vancouver Canucks, in four games in the first round.
In Game 5 of the second round against the St. Louis Blues, Jordan scored the first goal of the game. It proved to be a factor as the Kings won 2-1 to eliminate the Blues in five games. Jordan also engaged in a fight in the first period, energizing the team and crowd.
As the Kings went deeper into the playoffs, so did the pride running in Garden River.
“There were signs on people’s yards and along the highway,” Barbara said.
The Kings swept the Phoenix Coyotes in four games to advance to the Stanley Cup Final.
In Game 1 against the New Jersey Devils, Jordan played a key role in the first goal in the Final. Pursuing a New Jersey defenseman in the Devils’ zone, Jordan checked the defender to knock the puck loose. He passed it out front to linemate Colin Fraser, who shot and scored against future Hall-of-Famer Martin Brodeur.
After the Kings failed to eliminate the Devils in Game 4 and 5, Barbara said there was not much concern in Garden River.
“We said, that’s okay, we’ll get them on home ice, and they did,” she said.
Barbara said the Nolans are proud of Jordan.
“We were proud of Ted too,” Barbara said of Jordan’s father, who played in the NHL in the early-80s and won the Jack Adams award for coach of the year in 1998, but never made it to the Stanley Cup Final. “But this is something more, just winning the Stanley Cup. Or even just playing in the Finals.”
Since the 1994 New York Rangers won it, it has been a tradition for each member of the championship team to spend a day with the Stanley Cup.
Tom expects Jordan to bring it to Garden River.
“Oh yes, of course,” he said. “And the whole community will have a big party.”