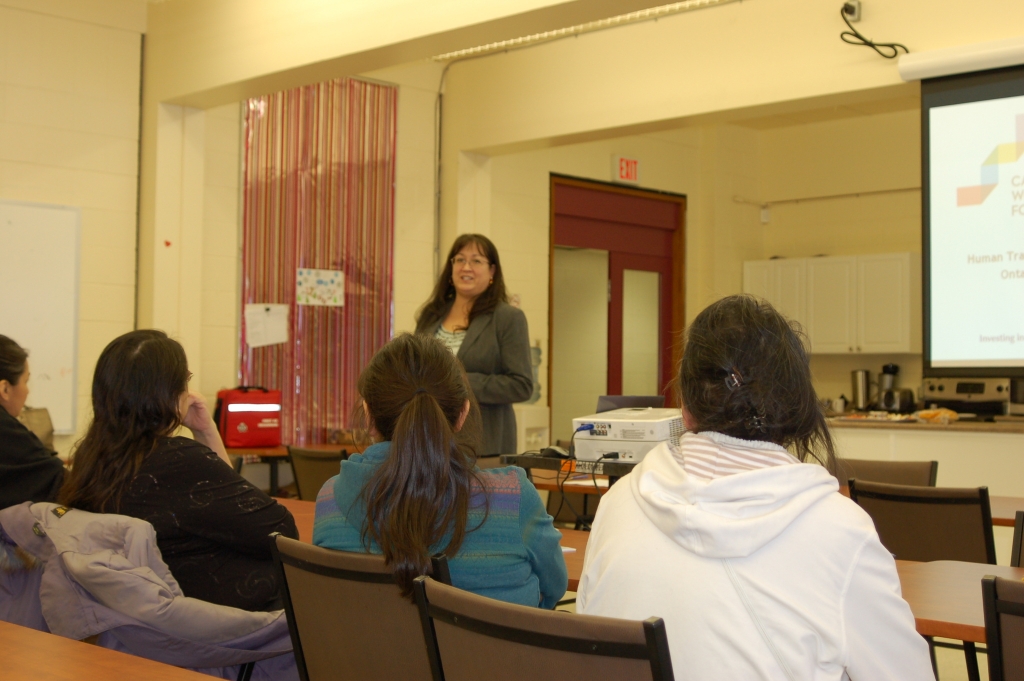 The reality of the sex trade in Canada, which involves for the most part victimized young girls hidden in underground sex trade and human trafficking networks, was a topic of discussion during two separate events held in Thunder Bay this March.
Bridget Perrier, co-founder of the anti-prostitution group Sex Trade 101, and Diane Redsky, a project director with the Canadian Women’s Foundation, were part of the two dialogues.
On March 6, Perrier sat on a panel that was put on by the Gender Issues Centre at Lakehead University. Perrier told the audience of 40 or so people that she entered the sex trade as a child and exited as woman.
“I still sleep with the lights on,” Perrier said, who has been out of the world of prostitution for 10 years. “I still suffer from the effects of the trauma (of prostitution).”
The panel itself consisted of four women, including Perrier. Three of the four had been involved in prostitution, and had started at a young age.
Redsky’s presentation, which took place March 18 at the Ontario Native Woman’s Association (ONWA)’s Thunder Bay site, went into detail on how prostitution was not a choice when it came to human trafficking.
Redsky, of Shoal Lake First Nation, works with the Canadian Women’s Foundation on the National Task Force on Human Trafficking of Women and Girls in Canada.
Though the presentation was open to the general public as well as frontline workers and social workers, there was a small turn out of people at the event. Perrier noted as well at the sex trade panel the lack of social workers, law enforcement, media, and frontline workers present in the audience.
“They should be here learning, hearing first hand about the women and girls they work with,” Perrier said.
“Human trafficking is not the same as human smuggling,” Redsky said. “With smuggling, one pays a fee to enter Canada and they are free to go, with trafficking once they get here they are not free to go.”
Redsky also dispelled the myth that human trafficking only happens with people who are coming into Canada, which she said does happen but that the majority of human trafficking cases involve Canadian citizens themselves. “The trafficking started and occurs in Canada.”
“There is an overrepresentation of Aboriginal women and girls being trafficked in Canada.” Redsky said. She stated that Aboriginal women and girls are targeted for their vulnerabilities and that they experience more violence than any other cultural group.
“As of September 2012, 72 human traffickers have been convicted in direct and related cases, 69 pending cases, 164 victims, most of the victims are Aboriginal women and girls,” she added.
“And who are the victims?” Redsky asked. “The majority are marginalized women and girls who were sexually exploited at a young age, some as young as 10 years old, homeless youth, kids in the child welfare system, with a demand for young and younger girls.”
“For one young woman or girl, a trafficker will have a financial gain of $300,000 a year,” Redsky said. “Many traffickers will have multiple girls, two to five young women. The younger the girls are, the more financial gain.”
Redsky said that the amount of financial gain that the trafficking of young girls bring is something that the traffickers want to protect, which is why there is a deep underground network of traffickers across Canada.
“If you think it (human trafficking) is not happening in Thunder Bay, then you are wrong,” Perrier said.
“What do you think of when you hear the words juvenile prostitution?” Redsky asked. “Someone older who chooses the lifestyle? Now how about when I say child abuse? Someone younger, and someone is hurting them. We should never call it juvenile prostitution. Those two words should have never been put together.”
Redsky said that in Ontario, child protection legislation does not protect all kids. “One has to be under the age of 15 to be considered a child in need of protection. This creates a vulnerability for young people because there is no safety net for them.”
“With younger girls, there is a bigger financial gain,” Redsky said. “Sometimes they are as young as 10, with the average age being 13. Eighteen to 19 years old is less valuable, and those in their early twenties are almost of no value to the traffickers. The demand for them is not the same. That’s who you will often see in the survival sex industry.”
“Nobody sees the bigger picture,” Redsky said. “We need to build an understanding of what she has gone through.”