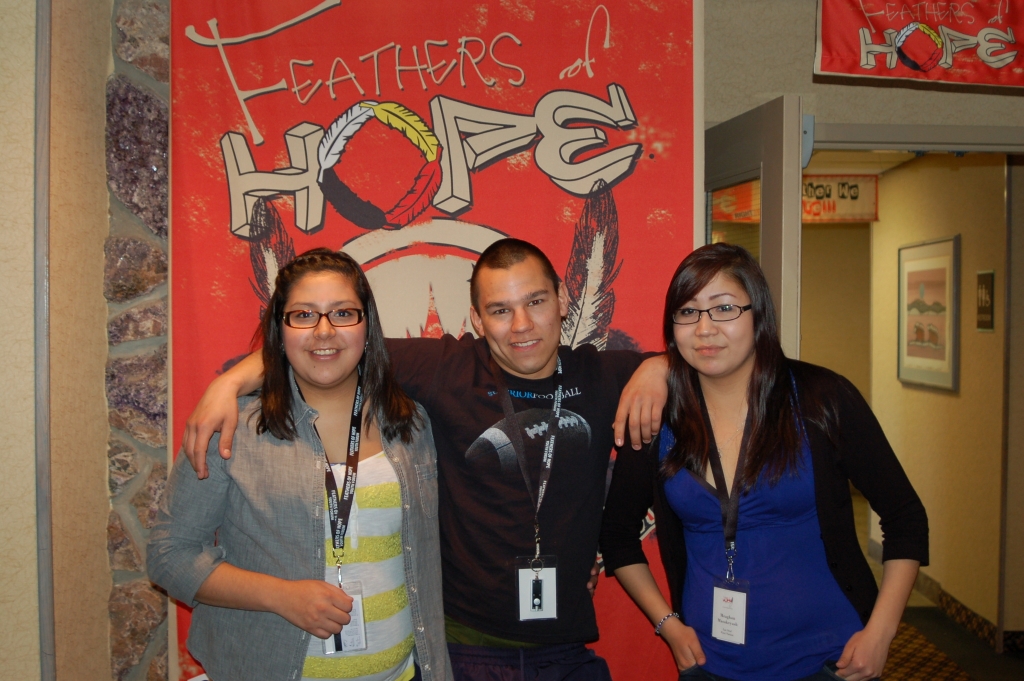 Addressing issues like health, education, culture, identity and suicide were on the agenda for youth delegates from 91 First Nations communities during the week of March 25 in Thunder Bay.
The Feathers of Hope forum brought youth from First Nations across northern Ontario together to discuss the issues facing young people and work together on solutions.
Kitchenubmaykoosib Inninuwug’s Kathryn Morris, amplifier at the Office of Provincial Advocate for Children and Youth in Thunder Bay, chose to be a part of the Feathers for Hope forum because she and her fellow amplifier Samantha Crowe are trying to raise the voice of the First Nations youth with action-based plans.
“It’s so positive and uplifting, how could I not be a part of it?” Morris asked. She is currently a student at Lakehead University. “Nobody’s really done a forum like this before.”
Crowe, of Lake Helen First Nation, said that she is on the same page as Morris when it comes to her reason for partaking in the event. “I thought it was so wonderful. And the youth know that they want to make this change to show how much they can do for their community. It’s important to raise issues going on in their communities. It’s the youth working towards the future.”
Stan Wesley, the forum’s keynote speaker, was an original member of Horizons For Hope, an event that was held 17 years ago to address hopelessness and suicide in Nishnawbe-Aski Nation (NAN) communities. Feathers for Hope builds on the work started by Horizons For Hope.
A Feathers for Hope media release states that First Nations children and youth are one of the most vulnerable populations of young people in Canada. “Compared to other young people in Ontario, First Nations children and youth are disproportionately represented in the youth justice and child welfare systems,” reads a line in the release. “They experience extreme poverty in greater numbers and face higher rates of malnutrition, disability, drug and alcohol abuse, and suicide.”
The release also states that the youth in First Nations communities often live without access to education, housing, drinkable water, and health care.
Inequality is one of the main issues that Morris wanted to see addressed at the forum.
“We wanted to address the inequalities that First Nation youth deal with, not only in urban communities but also at home. It’s important to know that inequality exists,” Morris said.
“For example, a First Nation student gets $2,000 to $3,000 less for education per year as a student from every other student in Canada. One in four First Nations youth have to live in poverty.”
“It (inequality) has a profound effect on First Nations youths’ self-esteem,” Morris said.
Crowe added that a lot of the youth have to leave their home communities to continue on in their education.
Morris explained that 70 per cent of on-reserve students do not complete high school. “We have to step up,” Morris said. “It’s time to make a change.”
Crowe said that she would like to see the youth take part in the decision-making process in communities. “We’d like to work with them, not just for them.”
“All youth need to know that they have the power to make change,” Crowe said. “They’re not just leaders of tomorrow; they are leaders of today as well.”
At the forum, youth shared their issues and experiences from their communities, and they devised plans to bring back to their home communities to address the issues.
“The most powerful voice for children and youth is their own,” said Irwin Elman, Ontario’s provincial advocate for children and youth . “I know these determined and passionate young people have an important role to play to effect change in their communities and find solutions to the harsh realities they face.”
The forum also included a career fair as well as a performance by Shibastik. At the end of the forum, the youth presented their recommendations to help improve their communities to First Nations, government, and community leaders.