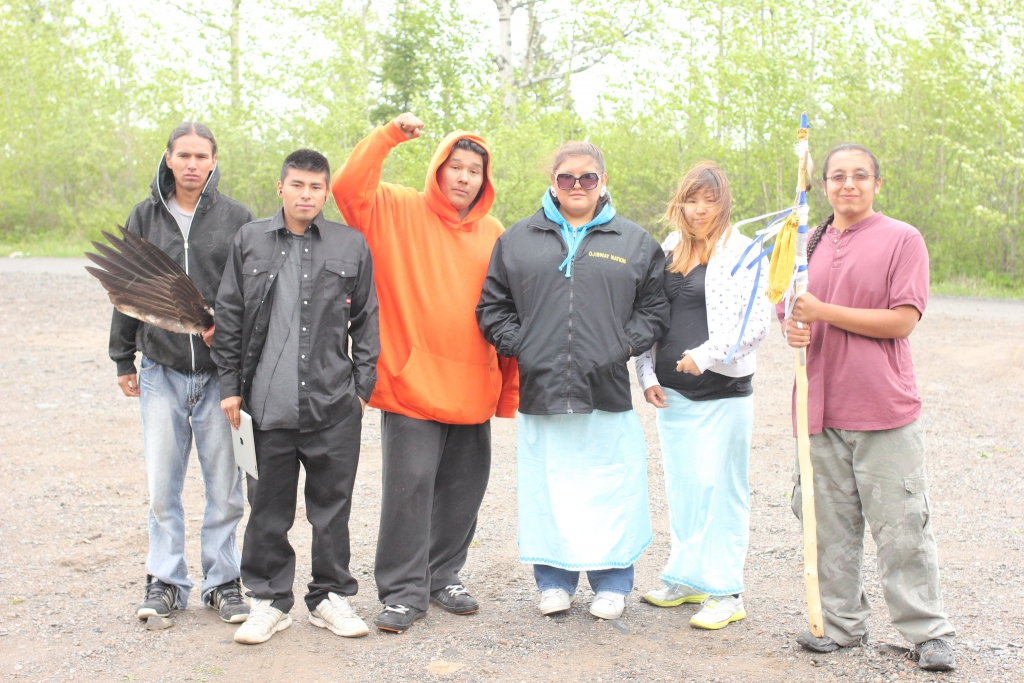 When Edmond Jack was 13, he joined a group who walked from Grassy Narrows to Toronto to raise awareness on a serious issue affecting his community.
After Jack led the youth with the eagle staff into Toronto, Elders told him he was natural leader.
“They said, ‘When you feel something needs to happen, you gotta do something, because chances are nobody else is gonna do it,’” the 17-year-old recalled.
Jack took that message to heart and four years later, he is leading five youth on a 2,000-kilometre walk to Toronto to raise awareness on the mercury poisoning affecting Grassy Narrows First Nation, his home community.
In March 1962, Dryden Chemicals Ltd. began dumping an estimated 10 metric tonnes of mercury into the Wabigoon River, contaminating the fish which formed the subsistence and economy of three communities, including Grassy Narrows, White Dog and some members of Wabauskang who lived at Quibell. Fifty years later, members of those communities are still suffering the affects of mercury poisoning.
Jack said the mercury damages the nervous system and vision, and that he continues to see people in his community affected by it.
“They’re shaky and when they reach for stuff, they miss it,” he said.
Jack said it also causes birth defects.
“So those who are born, they may not have mercury in their system but they are born with the symptoms.”
Jack also wants to make people aware that the mercury did not only contaminate the water and fish, but the whole ecosystem as well since water is everywhere.
“We can’t even eat animals on the land without worrying about sickness, because anything that affects us affects the animals in the same way because they drink the same water,” he said.
Jack first got the idea for the walk a month ago and got contact information from his mother, who organized previous walks of her own. He was joined by fellow community youth
Shanice Desrosiers and Jolene Hookimawillillene, along with youth from other communities, such as Ninodawah Richard and Clifford Acoby.
Adrian Acoby of Swan Lake First Nation in Manitoba decided to join the walk after reading a posting by Jack on Facebook.
“I wanted to support a great cause and support him, so I met up with him in Grassy Narrows, got to know each other, and got to know his friends and now we’re all friends,” the 23-year-old said. “Water is very important and I look forward to completing this walk.”
The walkers left Grassy Narrows on April 29. Jack said the first week was tough due to a lack of a support vehicle or funds. One night, with no sleeping bags or food, they spent outside during a storm.
“We slept overnight in the cold and continued walking in the morning,” Jack said. “A woman picked us up and took us to Whitefish Bay and sheltered us and fed us there.”
Later, the walkers received help from Jack’s grandmother, Maryanne Swain, who is now driving a support vehicle for the group.
On May 22, the walkers arrived in Thunder Bay and spent two nights in the city to rest and speak to youth about their community. Jack said they will stop at several communities along the way to spread their message.
“I always try to set up an event to talk to people,” Jack said. “I feel this message will be stronger because we’re young.”
The walkers plan on stopping in Pic River, Michipicoten, Sault Ste. Marie, Serpent River, Sudbury and Beau Soliel First Nation.
Jack said they fell behind in their schedule early in the walk, but now with a support vehicle and more donations coming in, he anticipates arriving in Toronto in time for the River Run 2012 on June 4, where they will deliver an address.
Jack said he hopes to continue to raise awareness on protecting the water in First Nation communities.
“It feels like people are going to forget about it soon, so I’m carrying on that message so it’ll remain strong – that fight for the water,” he said.