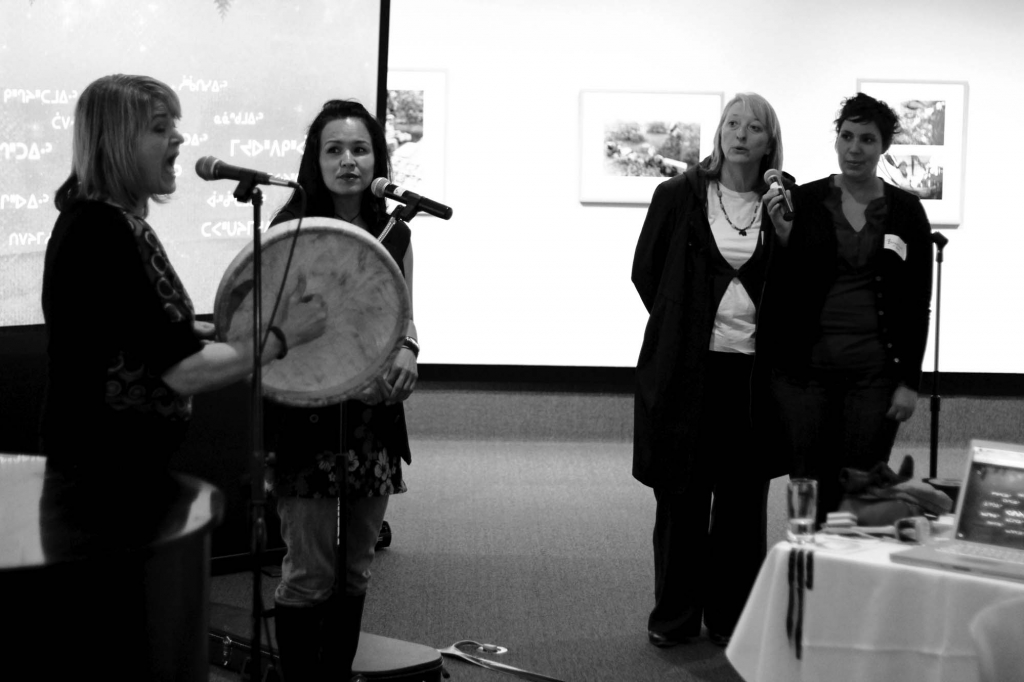 It takes a lot of courage for artists to put their work out to the world, says Winnipeg-based filmmaker Kevin Burton.
“There’s always going to be somebody who doesn’t like what you’re saying, no matter what,” said Burton, a Swampy Cree from God’s Lake Narrows First Nation in Manitoba.
When looking at a piece of work, Burton said one group of people might say, “you’re being too negative, try to focus on the positive,” while if the work is positive, some will say “you’re not fighting hard enough.”
“You can never win,” Burton said to the Aboriginal artists gathered at the Thunder Bay Art Gallery. “The only way to win is to honour your voice and put out to the world what your intentions are.”
Burton was speaking during a discussion panel at the Flowering Moon: Aboriginal Artists Gathering on May 11. About 50 Aboriginal artists of various disciplines from northwestern Ontario showed up at the gathering organized by the Ontario Arts Council (OAC). The gathering featured panel discussion, performances and presentations from various Aboriginal artists.
Burton spoke during a Telling Stories on Our Own Terms discussion panel. As part of the discussion, Burton showed a portion of his 2007 experimental film Nikamowin (Song), which had the audio of spoken Cree re-edited to create unique soundscapes.
Burton said artists need to put out their work using their own unique voice and words.
I think that’s what adds to the complexity of who we are as Indigenous people,” he said.
“That way, in the mind of the populace, we are complicated people and not just ‘Indians.’”
Thunder Bay filmmaker Michelle Derosier of Migisi Sahgaigan (Eagle Lake First Nation) echoed Burton’s sentiments, saying that Aboriginal artists need to overcome any reservations about displaying their work.
“I think whenever you do something and put it out there, there’s instant vulnerability,” said Derosier, who co-owns Thunderstone Pictures. During the gathering, she showed a portion of “Return to Manomin,” a documentary about her family’s attempt to reconnect with their rice harvesting tradition.
“It’s a little bit scary and sometimes you’ll meet people who won’t like what you had to say,” she said. “There’s always that fear and it takes courage to put yourself out there. Usually it’s worth it.”
Derosier sat with the audience to listen to other presenters during the gathering and she noticed similar themes among Aboriginal artists.
“I think that’s what kind of unique about Indigenous art, whether you’re a painter, beader or filmmaker,” she said. “Everything is always sort of interconnected and you can always find that and it doesn’t matter where you go or what artist you’re talking to.
“You find something in common and you find there’s sort of a common vision,” she said. “It’s not intentional.”
Mark Beachey of Seine River First Nation also took in a lot of what he learned during the gathering. He is an employment counselor in his community and also a bassist in a band called Distant Legacy.
“It was great meeting different artists and looking at different programs that can be implemented into the community,” he said. “I hope they have more and that more First Nations communities take part.”
OAC Aboriginal Arts officer Sara Roque said the gathering is a way for artists to gather, dialogue, inspire and network with each other.
“A lot of times, artists are always working hard and we don’t get a chance to renew and rejuvenate and connect with other artists,” she said.
A filmmaker herself, Roque said the day was positive and felt that artists took in a lot.
“The arts can offer a place where we can transform a negative thing around us and turn it around to put it in different perspective and interpret something and put it out in the world,” she said.