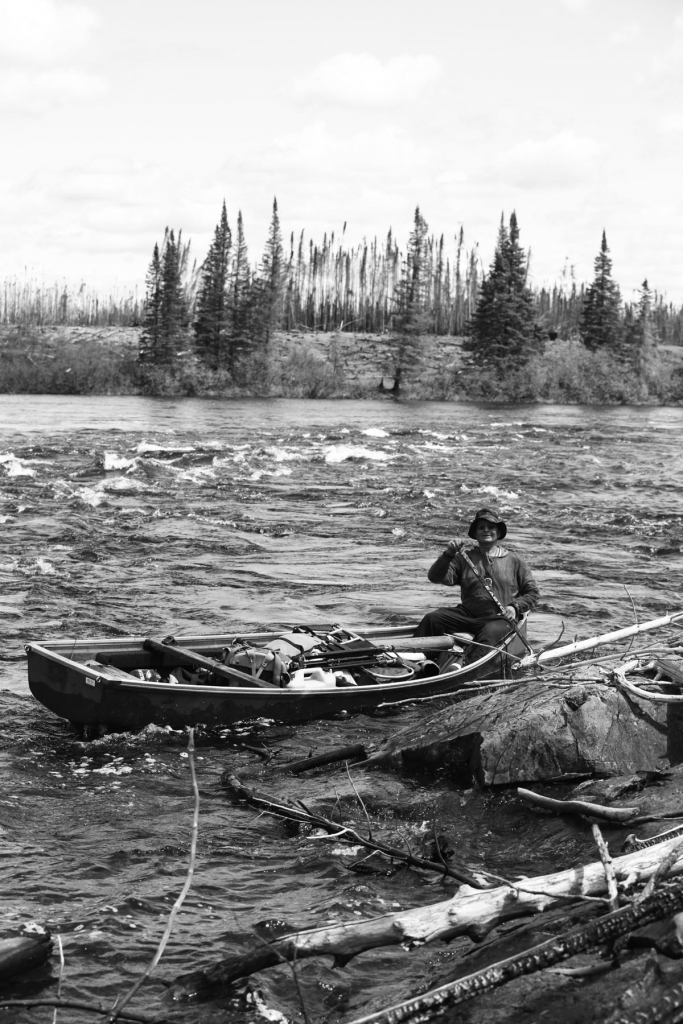 It took them two weeks but the duo canoeing from Pickle Lake to the ice floes of Hudson Bay have completed the first leg of their journey.
Sam Hunter of Weenusk First Nation and Kevin Vallieres of Hearst, Ont., reached Wunnumin Lake First Nation on June 6 after embarking on their 1,500-kilometre journey from Pickle Lake on May 23.
“Reaching Wunnumin Lake is breathtaking,” Hunter said in an email to Wawatay News. “Water and islands as far as the eye can see which only makes you feel real good inside.”
But while the pair enjoyed the sights and being one with nature, traversing down the Pipestone River had its challenges.
“The weather for the canoe trip didn’t start good,” Hunter said. “Snow, sleet, rain, and cold weather stuck around for a week.”
They also came upon a portion of the forest that was ravaged by a forest fire two years ago.
“Trees have fallen down, obstructing portage trails, and camping in ash for three days straight made the trek bad,” Hunter said. “Everything was dirty no matter how you tried to keep things clean.”
The travellers had to make 15 portages due to the amount of rapids and trees obstructing the river. Hunter said it was difficult to clear portage trails with a hot sun and other elements bearing down on them.
“You wake up in the morning and just as soon as you left one portage, you reach another one in no time,” he said. “Black flies are like clouds and a few times they end up in your throat.”
The duo faced other ordeals.
While going around a bend and approaching rapids, Vallieres hit a “sleeper” – a log hidden beneath the water – flipping the canoe and throwing Vallieres and most of his gear into the water. Vallieres managed to grab onto his canoe and continued to float toward the rapids.
From the shore, Hunter threw him a rope and managed to pull Vallieres out of harm’s way.
“I think the rapids would have done him in,” Hunter said.
Though it was not clear how or when, Vallieres also sustained two broken ribs. On his Facebook, Vallieres indicated he lost most of his gear.
“If that isn’t enough, a river otter stole the only good pair of hiking boots I had left,” he wrote. “So I’m down to (one) pair of sneakers.”
A few years ago, Vallieres had suffered a spinal cord injury and spent a year in a wheelchair. He had canoed since then, Hunter said, “but this was extreme.”
“I didn’t think he would make it to Wunnumin Lake but he managed to struggle on and made it,” Hunter said.
Hunter did not escape injury. While clearing a portage trail with an ax, Hunter cut himself on the leg.
“The wound was bad and ugly,” Hunter said.
After a night of the wound being held by band-aids and a t-shirt, it was “good for some Krazy glue to close the wound the following morning,” he said.
Hunter received medical attention when the pair arrived in Wunnumin Lake.
Beaten by the elements and rib injuries, Vallieres said good-bye to Hunter and flew home on June 7.
Undeterred by his injury and the loss of a travel partner, Hunter continued the journey solo, leaving Wunnumin Lake on June 8. He arrived in Nibinamik First Nation two days later and spent three nights in the community attending its 37th year celebrations.
Hunter departed Nibinamik on June 12. When he reaches Webequie First Nation, he expects to be joined by four other canoeists on the way to Peawanuck and Hudson Bay.
Despite all the struggles, the 46-year-old was in high spirits.
“The trip is awesome to say the least,” he said. “The scenery, cry of the loon and the sounds of the rushing rapids just cleanses the soul, mind and body.”