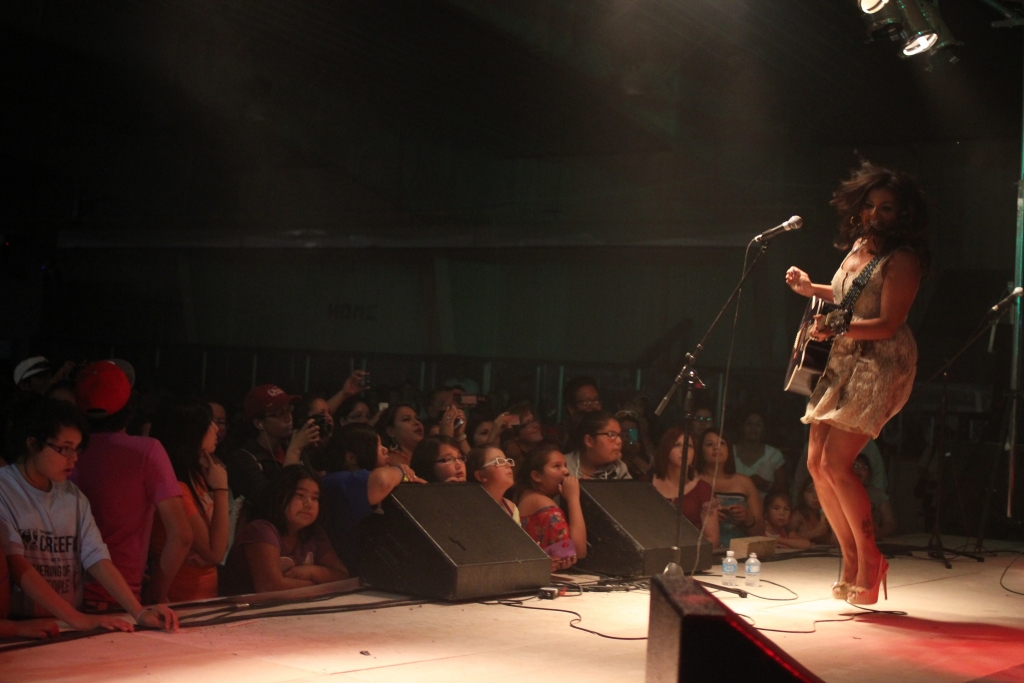 For country star Crystal Shawanda, it was her first time visiting the community of Moose Factory.
“I’m excited to be here,” she said. “The boat ride was beautiful. Overall, I had a terrific time and the community was so awesome.”
While Muskegowuk’s 10th Annual Creefest and Moose Cree’s 2012 Gathering of Our People featured numerous talented performers and entertainers throughout the four-day cultural festival, it was Shawanda’s headlining July 28 performance that was the most highly anticipated.
Playing before a near-packed arena on the last night of the festival, Shawanda enjoyed the energy that permeated through the Thomas Cheechoo Jr. Memorial Complex.
“It was a real big treat: everybody coming up to the stage, and I saw people dancing off in the distance,” she said following the show. “A concert is supposed to be fun and everybody jumped on board with that tonight.”
Born and raised in Wikwemikong Unceeded Indian Reserve on Manitoulin Island, the Ojibwa country star performed for nearly two hours, playing songs from her latest album, Just Like You, as well as her first album, Dawn of a New Day. She also performed several covers, including Ben E. Lee’s “Stand By Me,” which she dedicated to Mushkegowuk Grand Chief Stan Louttit and his wife, who were celebrating their anniversary the next day.
Between songs, Shawanda spoke to the audience about the ups and downs of her music career. After moving to Nashville in her early teens, Shawanda recorded her first album, in which she composed all the tracks.
Inspired by the likes of Hank Williams, Johnny Cash, Loretta Lynn, Patsy Cline, and later, Steve Earl and Dwight Yoakam, Shawanda said songwriting is a “cheap therapy” for her.
“That’s the thing for me, it’s the thing that’s opened my emotions, because in life we’re afraid to wear our hearts on our sleeves but it’s not such a bad thing to let it out,” she said.
She released two more independent albums before Dawn of a New Day, which was released by a professional recording label in 2008. The album debuted at number two on the Canadian Country Albums chart and reached number 15 on the Billboard Top Country Albums. She went on to tour with Brad Paisley in 2009 across the U.S.
While happy with her success, Shawanda was unsatisfied with the financial and creative constraints of a label and created her own, New Sun Records, through which she released her latest album in April.
Shawanda said it was a secret lifelong dream to create her own record label, as she had always been fascinated with the business side of the music industry and its inner workings.
“Emotionally, it’s been draining because when you build something, it’s hard at first,” she said. “It’s not easy. (But) it’s been satisfying and it’s the most happiest I’ve been in a long time.”
In introducing Shawanda, Moose Cree’s Lawrence Martin said he saw her perform as a child and saw the potential of her music and voice. He said it was thanks to the support of her parents that Shawanda was able to succeed.
“My parents are the reason I’m here, I couldn’t have done it without them,” Shawanda said, adding that they would drive her through snowstorms to reach gigs. “They realized it was my dream, but we were dreaming together because I knew exactly what I wanted. And having that support was everything. It made me feel like that I could do anything and it made me fearless.”
By telling the audience parts of her story, Shawanda hopes everyone leaves inspired to pursue something positive.
“That’s what I try to spread, is positivity and hopefully they’re being positive people and hopefully trying to do the same,” she said. “It makes the world a brighter place, not to sound cheesy or anything, but I really do believe that.”
Whether it was through her dancing around the stage or engaging the audience, Shawanda’s performance oozed energy and charisma.
She said since her childhood, she was inspired by the showmanship of Tina Turner. Then when she moved to Nashville, she caught Garth Brooks in concert.
“He was all over the stage and I thought I want to do that, except in a dress,” she said, laughing.
Shawanda previously performed at Creefest in Taykwa Tagamou several years ago, and was set to perform last year in Moosonee before problems with customs prevented her arrival. But this year, after driving several hours, catching three flights, and taking a boat ride, Shawanda arrived in Moose Factory all the way from Nashville to close the festival.
After the show, Shawanda held a meet and greet where she signed autographs and posed for photos with fans. She said she enjoys going to communities and meeting her them close up.
“For me, anytime I do shows like this, I feel like I’m home, even though I’m not Cree,” she said with a laugh. “But for me, I see so many old friends, and when we come to the communities, everybody embraces us. They’re so appreciative and even the crowd, the energy they gave us tonight, it feels like we’re coming home.”