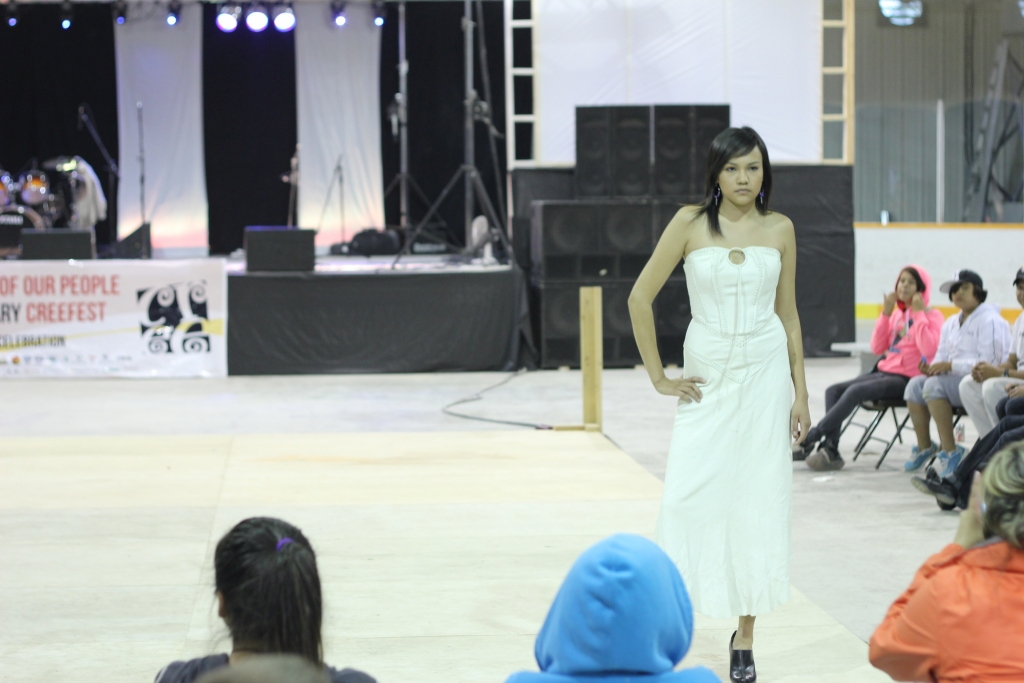 The beauty of Moose Cree was featured in a fashion show during the Creefest and Gathering of Our People (GOOP) festivals.
On July 26, 14 models consisting mostly of Moose Cree ladies walked down the runway during Unity Through Fashion, a fashion show that displayed the work of First Nation designers Tracey Toulouse of Swirling Wind Designs and Bruno Henry.
Thalissa Linklater said she heard about the fashion show through her aunt and uncle, who knew Toulouse and Henry.
“I’m so outgoing and I like doing things so once I heard that there was a fashion show, I gave them my name and they called me up,” the 22-year-old said.
Heather Hardisty was recruited to model after her family heard about it. A member of the Ontario Rangers for the summer, Hardisty, like Linklater, had no prior modeling experience.
“I was shy in front of people,” the 16-year-old said, “but you get over it when you’re with people doing the same thing.”
Katelyn Job had no problems with walking down the runaway. The 20-year-old had previously entered a modeling competition and earned a contract with a talent and modeling agency, where she worked for two years. Though she has not modeled in a while, Job felt the need to do so at Creefest and GOOP.
“I wanted to do it for the community,” she said, “to show them that everybody’s design is beautiful and everybody has their own creations in their own way and can make something pretty.”
Before a crowd on the arena pad in the Thomas Cheechoo Jr. Memorial Complex, the models walked down the runway, first wearing the designs of Henry.
Linklater and Hardisty had similar thoughts during their time in front of the crowd.
“I was just afraid of fumbling and falling,” Linklater said.
“I was like, don’t fall. Please don’t fall,” Hardisty recalled, but for both ladies, the fashionshow went without incident.
Fear of falling aside, Linklater said she wanted to adequately present the art of the designers.
“I didn’t want to screw it up and I just wanted to present the clothes and get (Henry’s) name out there because I really like his designs, they were so different and out there. So I really want to showcase his art.”
It is a similar mindset for Job when she walks down the runway.
“I have to think about my clothes and not my body,” she said. “I think of the clothes and how I can present them to people and how they like it. If it was the back that had the design, I would try to present it to them.”
After the show ended, the girls said they had a good time.
“It was very fun and I guess when you’re with a bunch of people, it’s a group effort,” Hardisty said. “And I really liked it. What girl doesn’t like to get dressed up?”
Job believes the fashion show was great for the community.
“It shows you can get noticed in good way by doing something good,” she said.
Job plans to get back in to modeling and eventually would like to become a designer herself.
“I like other people’s clothes and do touchups of my own,” she said.