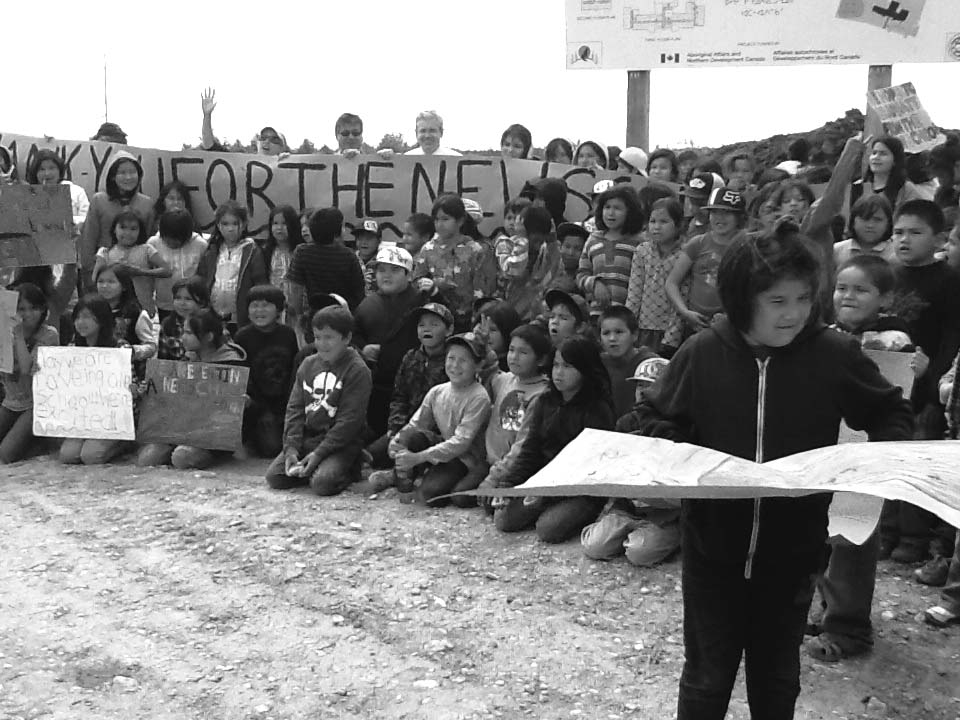 The prospect of getting a new school in Attawapiskat is becoming a reality as the community celebrated the breaking of ground at the site of the future school.
On June 22, students, community members, Chief Theresa Spence, the Koostachin family, Shannen’s Dream spokesperson Chelsea Edwards, MP Charlie Angus (NDP – Timmins-James Bay), NAN Deputy Grand Chief Mike Metatawabin, and Aboriginal Affairs and Northern Development of Canada (AANDC) Deputy Minister Ron Halman were on hand to celebrate the event.
“It was an exciting event for the children,” wrote Metatawabin in an email. “You could see the teachers were just as excited by the way they got the students to paint signs expressing joy and gratitude.”
Set to open in March 2014, the new facility will finally answer the community’s calls for a school that have been ongoing since the John B. Nakogee School was forced to close in 2000 due to diesel fuel contamination sustained from the 1970s. Since the old school closed, students have been learning in portables, prompting complaints from students and teachers that the portables are poorly constructed and not a practical learning environment.
Several AANDC ministers have promised a new school over the past 12 years, only to turn back on the promise.
“We are celebrating today that we finally will get a new school for the children of Attawapiskat, but we still ask ourselves why it had to take this long,” Angus, who lobbied for the new school in Parliament, said in a press release.
A campaign aimed at urging the federal government to commit funds for a new school was led by Shannen Koostachin. In 2010, she died in an automobile crash.
In late-2011, her friend Chelsea Edwards picked up where Shannen left off and became spokesperson for Shannen’s Dream.
Angus said it was the children who made the difference in getting the new school.
“When Shannen Koostachin began her campaign for the school, I think that was the difference maker,” he said. “All of a sudden people from across Canada and the world for that matter saw the looks on the children’s faces.”
Metatawabin said with all the jubilation in the air, they were also reminded to remember the ones who could not be there to celebrate.
“It was with mixed emotions as well the Koostachin family were there to witness the blessing of the event,” Metatawabin said. “Serena, who spoke on behalf of her sister Shannen, spoke through heartfelt emotions in acknowledging the work she had started.”
Metatawabin said construction is in full swing with three excavators working on the site and construction crews making camp. Four loads of supplies are expected to arrive in the community by barge over the summer.
AANDC has committed $31 million to construct the school while Manitoba-based Penn-Co Construction is the contractor. The project is managed by P.M. Associates Ltd.