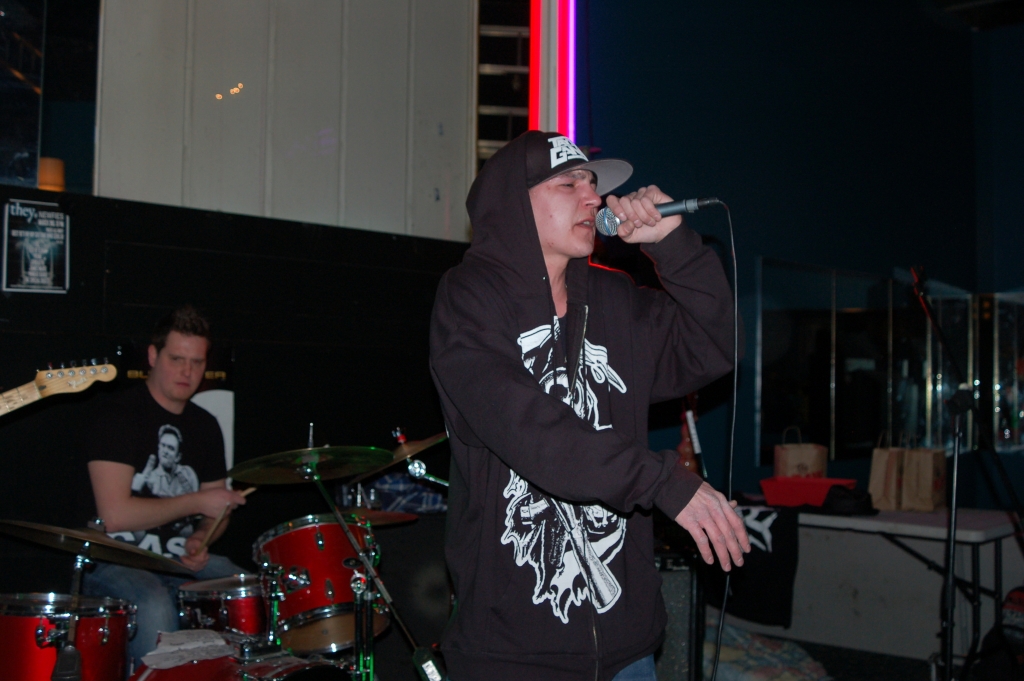 On March 2, Thunder Bay-based company They.Media hosted their first ever hip-hop show at Newfie’s Pub with several acts taking to the stage in what turned out to be a successful and entertaining event.
They.Media is an Aboriginal company that specializes in film, video, public relations and, more recently, music. Tony McGuire, producer and director of They.Media, said he has been working with his company for four years, specializing in videos and PR, and that switching to music was a logical step to take.
“The majority of the (They.Media) artists are Aboriginal,” McGuire said. “We are trying to promote the Aboriginal representation in the music scene.”
After witnessing how much success Shy-Anne Havorka has with her career as a musician, McGuire and those at They.Media were inspired to pursue the same success.
“I was working with all these different people and their PR, and I thought why not apply all of my skills to my own projects,” McGuire said. He explained that They.Media’s staff is comprised of mostly Aboriginal people.
“We are all successful at our own little niches,” McGuire said of the staff. The purpose of the hip-hop show was to have all of They.Media’s artists on display for the public for the first time.
The performers consisted of local hip-hop artists, both Aboriginal and non-Aboriginal, like Preme Palorsaari, Shibastik, Rise of Elohim (Li Obi-Dope), Tim Cheppenko, and Baj and Chad “Nevamind” Miles of the label Deepcave.
McGuire said he wanted to break stereotypes regarding Aboriginal people and artists in Thunder Bay with the show, and to give something back to the Aboriginal community as well.
“There has been so much stereotyping going on since Idle No More, and I want to break those with getting out and putting on shows and making music to hopefully fix the problem and bring people together.”
“I wanted to put on a show people would like,” McGuire said. “Hip-hop is probably the best way to connect to Aboriginal people because the music is about culture and oppression. I think it’s the easiest way to connect to our Aboriginal people.”
McGuire explained that when They.Media first announced the show was happening at Newfie’s, there was a lot of criticism. Some people felt it was a less than favourable place to host the event, and had concerns with security.
The show itself went off without incident, and McGuire feels it was a great success.
It was Obi-Dope’s first time performing at Newfie’s, and he enjoyed it. Obi-Dope, who is from Fort William First Nation, explained that he wanted to take part in the show because he is currently working with McGuire on new projects.
“The crowd was awesome, I got lots of love,” Obi-Dope said. “They were very interactive with me and I liked that. I was satisfied with my performance there.”
Palorsaari said he had the best experience performing at Newfie’s since he has been playing live in Thunder Bay. “I have opened for some bigger name artists, but this was a special show for me in many ways.”
Palorsaari explained that his friends and family don’t often get to see him perform in the city because they live in areas like Westfort and East End, so Newfie’s was a good location for the show. “Especially in that type of atmosphere where you can tell the crowd appreciates what you’re doing on stage and they let you know, so it makes it all the better.”
McGuire said that the Newfie’s show went off without a hitch, and was successful business-wise with no problems and no incidences of violence.
“I was glad to break that perception and finally lay it to rest for a lot of people who are scared of the Victoriaville Mall area and the Aboriginals who frequent there,” McGuire said.
“It’s stupid to me, but that’s the reality of the stereotype, right? I have been fighting them everyday for my whole life so we’ll continue on into the future.”
“Our city is divided, it always has been,” McGuire added. “Within Port Arthur and Fort William, Aboriginals are viewed as less than equal. We need more of these types of events to show support and also show that Aboriginal people just want to have fun, too, and they want to dance and have a good time.”
“I am looking forward to doing our next show,” McGuire said. “We will be building the scene up slowly so that it is possible for an artist to make a living in Thunder Bay.”
McGuire can be contacted at jamcguire@theymedia.com to book They.Media artists for shows or youth events.