‘We have to shake the legacy of colonialism’ 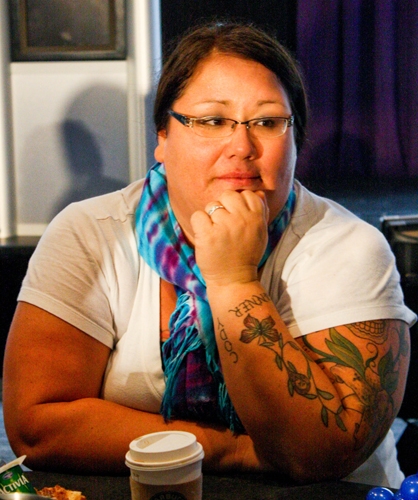 Bridget Perrier is a self-described “warrior.” She is a survivor in every sense of the word.
Adopted out by her Ojibwe mother to a non-Native family in Thunder Bay, she suffered sexual abuse at the hands of a family friend. The repercussions of this abuse surfaced when she was placed into a Children’s Aid Society-run group home in the city and was quickly lured into the world of prostitution at the age of 12.
“There were a lot of us,” Perrier said of the underage prostitutes who were working in Thunder Bay.
Perrier is now 36, and it has been 10 years since she exited the world of prostitution.
She works with her website SexTrade101.com in helping spread awareness of the world of prostitution. The site is a tool for women who want to escape the sex-trade.
Perrier is very open when speaking of her past; she does not talk quietly when discussing the life she lived while working as a prostitute. Her voice is strong; she speaks quite loudly, almost as if she is speaking for the first time.
In some ways she is, for the voice of prostituted women often goes unheard or is too afraid to talk.
Perrier is an example of how one can turn their life around if they really want to.
She talks about her life at 13 years old, of being flown to Halifax to stay at a brothel. She would stay with the brothel owner’s kids so that if the house was raided they could lie and say she was a friend of their children.
Stories like this are not uncommon when it comes to prostitution and underage girls. Perrier would like to see it eradicated. She has lived the life and does not want to see any more girls sucked into it.
“There was no enjoyment when I was prostituting between me and the men who paid me. You don’t have control,” Perrier said. “You’re someone else’s property. That’s how I felt for many years.”
“To this day, I still have intimacy issues,” Perrier said of the psychological damage that has been done to her because of prostitution.
Perrier said that a lot of the First Nations prostitutes she worked with were often marginalized because of addictions. Perrier knows that even now it is not uncommon to see a First Nations prostitute on Court Street in Thunder Bay who looks strung-out because of the city’s own OxyContin epidemic.
“The drugs are killing the First Nations people,” Perrier said. She too developed a drug-habit of her own after a few years working as a prostitute. “It was a hidden habit,” she explained.
Before the age of 17, Perrier gave birth to her son Tanner and he was diagnosed with acute lymphoblastic leukemia several months after.
“For five years of his whole life, I watched my baby suffer. Chemo treatments, bone marrow transplants, immense suffering. And I couldn’t get it together,” Perrier explained. “I still worked, I had to work.”
Perrier was arrested around the time her son was on his deathbed, but she managed to get out of jail and spend three days by his side. He made her promise not to “go to work” anymore before he died.
It was a promise she kept.
After realizing there was no assistance for her in Thunder Bay, Perrier left to Toronto and found help in the Aboriginal community there. There were services in the city to aid women who were in her situation. Soon after, she gave birth to a baby girl. When she changed her baby’s diaper one day, she knew in her heart that the cycle of prostitution would end with her.
“No man would do to my baby girl what had been done to me,” Perrier said. “I reclaimed myself, my title. Everyone has a title; I knew I was a warrior,” Perrier said.
“I realize that there is a legacy of colonialism going on, and oppression,” Perrier said of First Nations women who are involved in prostitution. “We have to shake that legacy off.”
Perrier and her Sextrade101 group now travel across Canada to speak at conferences and workshops, as well as schools, on the subject of prostitution in hopes of preventing more young people from entering the world.
Perrier is adamant that she will stand up to the men she encountered in her life who hurt and used her, and say “you are not going to hurt any more little girls.”