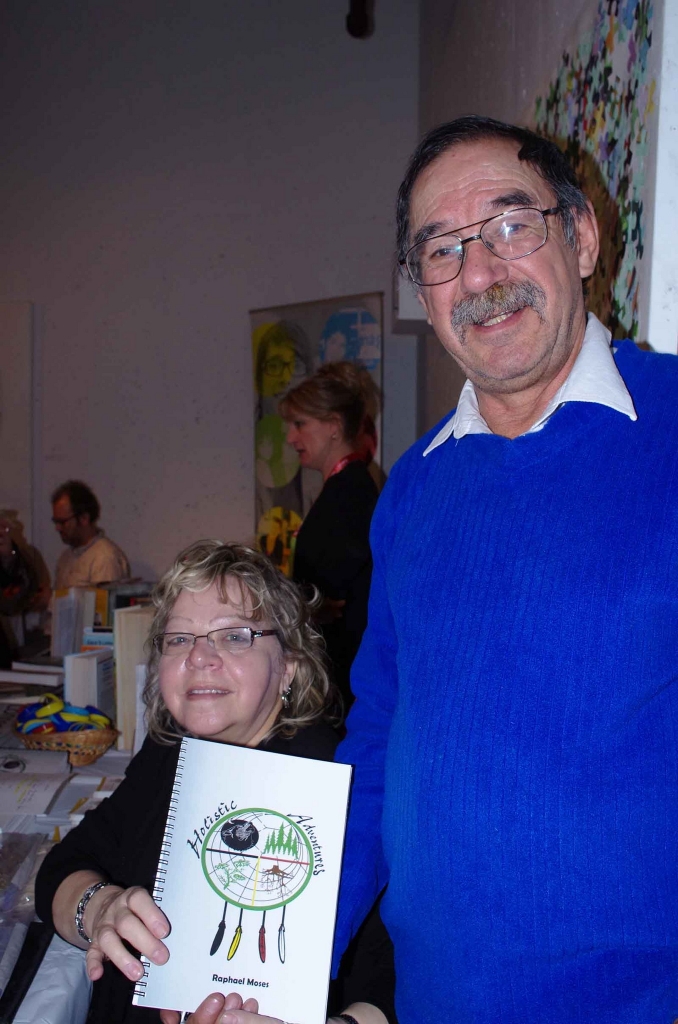 Pic River’s Raphael Moses recently launched his Holistic Adventures book on traditional medicines at DefSup’s Feb. 21 Book Market and Launch.
“It deals with the physical, spiritual, mental, emotional,” said Moses, who began studying traditional medicines about 35 years ago. “There are pictures of the herbs, the barks, the roots, what they are (used) for, where you can find them, when to pick them, how to dry them, how to prepare them and how to look after yourself in healthy living.”
Moses began his traditional medicine studies by sitting down and listening to the Elders.
“I decided to talk to people in their own community,” Moses said. “You have to be respective and learn off your own people.”
After being taught by seven Elders over the years, Moses now wants to share his knowledge with others because he has seen Elders pass on over the past 10-15 years without sharing their knowledge.
“I watched the Elders pass away,” Moses said. “And the youth came out and said ‘we don’t have any more teachers out here. We don’t have nobody to talk to; no one to teach us.’ So I’m hoping this book will go out to the public and help the people.”
Moses began the publishing process in October 2013 by documenting his knowledge on paper, talking with people at the Thunder Bay Public Library and Thunder Bay Art Gallery and consulting with book layout people in Thunder Bay.
“My cousin Renee Copenace helped me type it out,” Moses said. “We copyrighted it about a week ago. To see something like this, it is a dream come true. We get to leave these medicines and the literature for the youth to learn.”
Moses wants to share his traditional knowledge with everyone.
“Traditional medicine is for everyone, not just for Natives,” Moses said. “It’s for everyone that walks the land.”
Moses encouraged people to consult knowledgeable people when they are learning about the traditional medicines.
“Watch what you do and ask questions,” Moses said.
Moses said a number of common plants can be used for healing purposes, such as blueberries.
“It is an antioxidant,” Moses said. “It just helps people lower diabetes levels.”
Moses said mint can be used for migraine headaches and stomach problems, such as ulcers.
“The juniper helps people with kidney and bladder problems,” Moses said.
Moses said traditional medicines only account for five per cent of the healing process.
“Ninety per cent of the healing is going to be done by each individual,” Moses said, noting that what people consume and how they live also affects their health.
Moses usually harvests his traditional medicines from areas that are not exposed to aerial spraying.
“You can’t pick beside roadsides, you can’t pick under power lines because of radiation,”
Moses said. “So there are a lot of things you have to look for (when picking) herbs.”
Moses said his book sales have been good since he did a Wawatay Radio Network interview with Bill Morris.
“It’s going good,” Moses said. “We only printed 250 to start.”
Moses plans to publish another book on foods in the future.