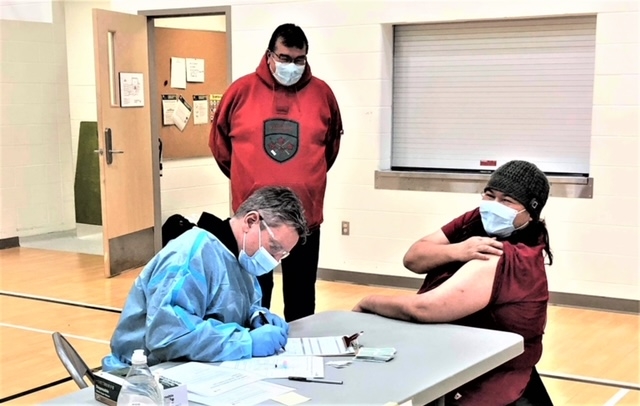 The Canadian Rangers have completed their first full week of support for the delivery of Covid-19 vaccinations in Northern Ontario.

The vaccines are being delivered and administered in 32 remote First Nations across the province’s Far North by Ornge, Ontario’s provider of air ambulance and critical care transport services. The Rangers, who are part-time army reservists living in their communities, provided the medical teams with support in the delivery of the program.

The Rangers set up vaccination sites in schools and community halls for the teams, provided them with cultural and language support, transportation for the elderly and disabled, and encouraged residents, some of them apprehensive, to get vaccinated.

“The feedback we’ve got from Ornge makes me proud,” said Lieutenant-Colonel Shane McArthur, the Canadian Army officer who commands the Rangers in Northern Ontario. “They recognize the work the Rangers are doing.”

“The Rangers were very, very good, very reliable, and they did the most important job in the community in encouraging people to come out and get vaccinated,” said Chief Leo Friday of Kachechewan, a Cree community with a population of 1,825 on the James Bay coast, where 73 per cent of residents aged 18 and over got vaccinated.

“It was a lot of work but the Rangers did their job and the results were good,” said Sergeant John Sutherland, who led the four-person Ranger support team in Kashechewan.

“I just want to let you know that I think the Rangers are awesome!” said Arden Penner, a critical care paramedic with Ornge, in an email to some of the Rangers. “I had not worked with Rangers before and meeting them today was a real pleasure…   They had everything set up so well in both Cat Lake and Summer Beaver.  The work they are doing in the communities to prepare for the vaccine rollout is very significant…  The guys and gals in Summer Beaver
basically created a field hospital in the gymnasium…impressive!”

The Rangers assisted Ornge last month in a week-long trial in which the residents of Peawanuck, an isolated Cree community on Hudson Bay, received Covid inoculations. The program began in earnest last week when Ornge medical teams flew into six First Nations to deliver vaccines to more than 2,000 people. This week the Rangers will be supporting Ornge teams in another six First Nations.

There are currently70 Rangers on full-time duty in support of the vaccination rollout program. They are supported by seven members of the Canadian Army from the Rangers’ headquarters for Ontario at Canadian Forces Base Borden

“That could increase to 100 to 120,” said Colonel McArthur. “The feedback we are getting on the Rangers makes me proud and reinforces the importance of the role the Rangers play in their communities. It is a long list and includes search and rescue, floods, fires, and things like support for the Covid-19 vaccine roll-out. They do all of it well.”