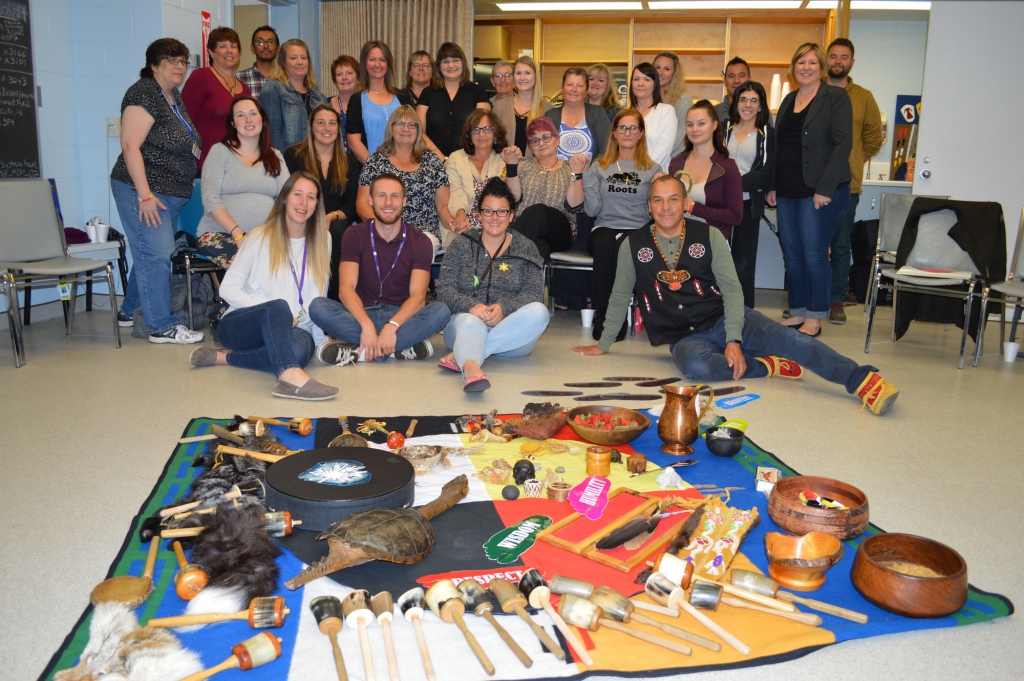 Cultural Mindfulness Workshops were held at the Kirkland and District and Englehart and District Hospitals on September 11, 12 and 13. Pictured are workshop participants at the Kirkland location with workshop facilitator George Couchie (seated front far right). Photo by Xavier Kataquapit.

Kirkland and Englehart and District Hospitals recently hosted a series of Cultural Mindfulness Workshops for frontline health care staff to inform them on Indigenous history and issues affecting First Nation communities. George Couchie, a recognized workshop facilitator with over 20 years of experience in teaching First Nation culture, issues and awareness training, led three workshops which took place on September 11 and 13 at the Kirkland and District Hospital and on the 12th at the Englehart and District Hospital. In total over 90 front line health care workers from various disciplines and departments took part in the workshops.

“My main message to everyone was that all of us in life has a story. I wanted to share our Indigenous story and our history and how our people got to this point in time. I wanted others to see beyond what is in front of them and to understand that there is generations of pain. This type of knowledge sharing and education is a good step towards understanding,” said Couchie.

He is an Anishinabe person from Nipissing First Nation near North Bay who owns and operates Redtail Hawk Training and Consulting. Couchie has over 30 years of policing experience and he is a recognized presenter and educator on Indigenous awareness programs and workshops throughout Ontario. Over the past three decades, he has provided educational events on indigenous issues for law enforcement, health services and government organizations. He has also been involved in projects and events designed for Aboriginal youth.

Gary Sims, President and Chief Executive Officer, Kirkland and Englehart & District Hospitals explained that the two hospitals have been engaging the Native community over the past year and had sought guidance on how best to serve and assist the Indigenous community.

“We have a large indigenous population that we work with and it is important for us to reach out and help them as much as possible. One of the ways for us to do this is to learn about Indigenous history and develop more of an understanding so that we can build a stronger relationship,” said Sims.

Over the past year, the Kirkland and Englehart & District hospitals have been working more with the First Nation communities they serve. An Indigenous Advisory Council was established in order to guide the hospitals on how to better serve the First Nation population.

The workshops provided by Couchie were funded by the Kirkland and District and Englehart and District Hospitals and were organized by Cindy Honeyborne, Communications, Quality and Patient Safety Leader with executive leadership by Sims. Those in attendance were front line health care workers.

“I enjoyed having the opportunity to see a new perspective that I never really saw before. Like many people, I never really had the chance to learn about Indigenous history from my schooling so it was informative for me. We learned a lot today,” said Justin McLean, Lab Technician.

The workshops are provided as an introduction to Indigenous history, culture and modern issues affecting the First Nation community. Couchie shared teachings on ceremonies, the significance of traditional spiritual practices and discussed First Nation Canadian history including issues of assimilation, racism and the residential school system. He also led participants in group activities that included the hand drum, the hand rattle and singing.

“I appreciated learning about the culture, the different items that are used in ceremonies and it felt good to sing with everyone. It was a bit overwhelming to learn about what happened to people and how it has affected their families today. Overall, it was a good learning experience and I was happy to be here,” said Nadia Parent, Medical Radiation Technologist.

Chester Jobson, Board Chair for the Englehart and District Hospital, who is also a citizen of Matachewan First Nation, played a supportive role in developing a stronger relationship between the two hospitals and the Indigenous community.

“This is the start of building a stronger relationship with the Indigenous community. Workshops such as this are important. Sharing the history and the major issues that continue to affect the lives of of First Nation people will do a lot to bridging the gaps we all have in our understanding of one another,” said Jobson.

The organizing group is hopeful that there will be ongoing cultural sensitivity programming in the future.