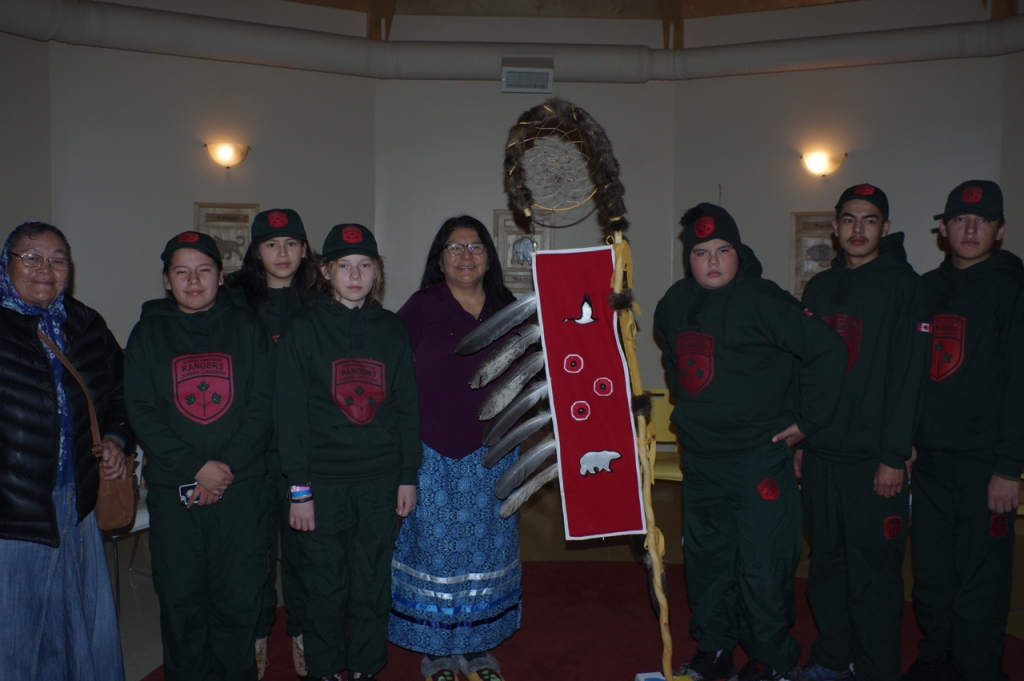 A group of Junior Canadian Rangers from Constance Lake participated in the unveiling of Nishnawbe Aski Nation’s Veterans Eagle Staff on Nov. 11 at the Ka-Na-Chi-Hih Specialized Solvent Abuse Treatment Centre in Thunder Bay.

“I wanted the youth to find out about their identity (and) their culture,” says Canadian Ranger Master Cpl. Florrie Sutherland. “I was observing them while they were sitting and they were really listening to everything that was being said.
And on our journey home, they are probably going to bring it up and ask questions. It’s too bad that we couldn’t bring the whole 41 Junior Canadian Rangers, but I’m glad that they are going to pass the message on to the others about what they saw today.”

The NAN Veterans Eagle Staff, which includes seven eagle feathers to represent the seven grandfather teachings, was unveiled during a feasting ceremony.

“The ceremony was very good — it was interesting to see,” says Canadian Ranger Master Cpl. Albert Sutherland. “It’s good for the youth, so we don’t lose our culture.”

“It did take some time, but I’m glad that through prayer and guidance through Elders and knowledge keepers that we were able to bring this Eagle Staff to life,” Fiddler says. “The main reason (for making the NAN Veterans Eagle Staff) was to honour our veterans and to honour our people because we are still here. For me personally, it was something I needed to do to honour my side of the family. I also thought about all the families that are affected through conflicts of history — I just wanted to honour them in a good way, and what better way than to be a part of the creation of our NAN Veterans Eagle Staff.”

Deputy Grand Chief Anna Betty Achneepineskum thanked all of the people who were involved in the creation process of the NAN Veterans Eagle Staff.

“This has required a great deal of time, love and patience, and we thank all of the families and communities from across NAN territory who contributed to its construction,” Achneepineskum says. “This Eagle Staff honours our brave warriors who have come to the defence of Canada in World Wars and conflicts around the globe, and those who continue this proud tradition of defending Canada’s interests.”

Achneepineskum says it is important to acknowledge the contributions that NAN veterans have made to the country.

“It’s very important for our young generation to have that knowledge so they can be proud of their history,” Achneepineskum says. “Many of our young people at times struggle in terms of acknowledging their identity.”

“I can see that for our young people it was very important that they be part of this ceremony,” Achneepineskum says. “So they will now spread that word about what they took part in today and (what) they have learned and it instils pride in them.”

“He served in the war and it’s an honour to come and represent my uncle,” Gagnon says. “It was a beautiful ceremony. I could feel my uncle’s spirit. He was a very kind man.”

NAN previously adopted the NAN Veterans Flag in 2009 to honour the service and sacrifice of NAN veterans in the defence of Canada’s freedom and democracy. The NAN Veterans Flag was designed by Constance Lake’s Patrick Cheechoo and is now flown in all 49 NAN communities.

NHL RADIO CONTEST, WEEK 5. Word of the Week is: kwa yak kwa ti si win (Oji-Cree) Kwayaskwatisiwin (Cree). Visit www.wawataynews.ca/nhlradiocontest for detail on how to enter to win a trip to Toronto to see the Leafs take on the Oilers on December 10!