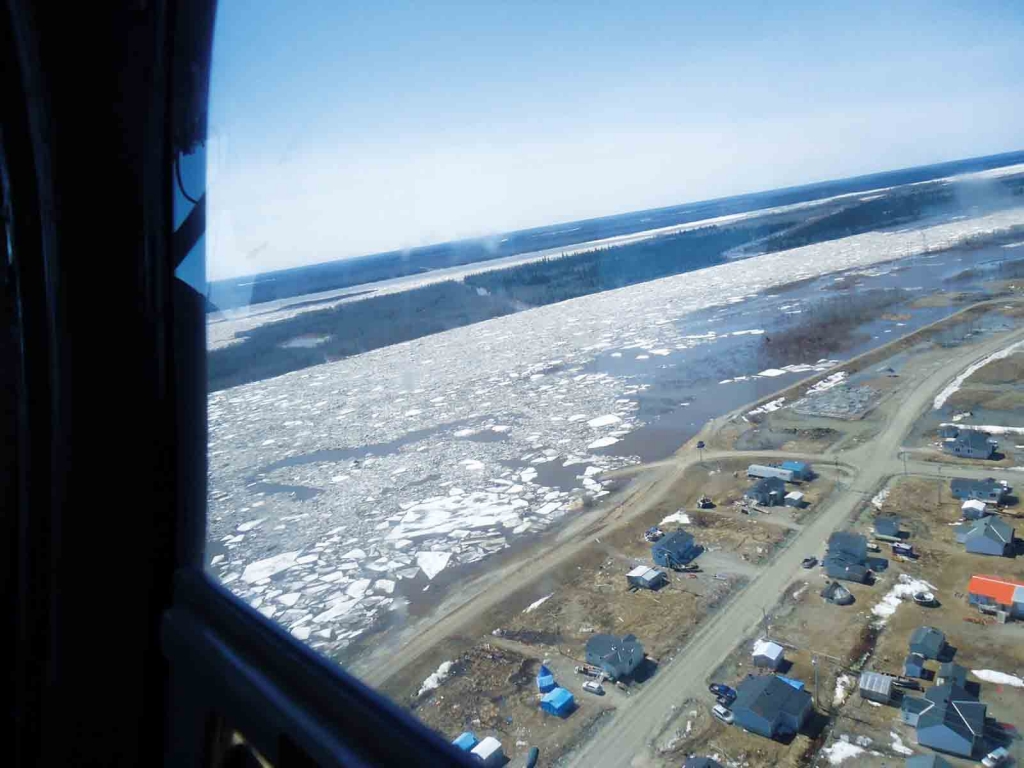 About 600 Kashechewan evacuees are doing well in Thunder Bay after being evacuated over the May 10-11 weekend due to flooding from the Albany River.
“We got evacuated Saturday (May 10) at night to Thunder Bay and we got here about one o’clock in the morning,” said Ruby Wesley, a mother of two children aged three and eight who was interviewed before Wawatay was informed media were not allowed to interview community members at their accommodations in Thunder Bay. “Our basement got flooded — the water was seeping into the ditches and the water was rising.”
Wesley said about 200 evacuees were also sent to Greenstone on May 11.
“Everybody knows the drill what to do, but hopefully this doesn’t happen every year,” Wesley said, noting the evacuees have been taking advantage of their situation by shopping and visiting doctors for medical issues they had before the evacuation.
About 800 Kashechewan Elders, vulnerable people, pregnant women, youth and their escorts were evacuated in 2013 due to a high risk of flooding on the Albany River.
This year’s evacuees included Elders, children and people with medical conditions. About 261 community members were left to be airlifted as of 1400 hours on May 12.
“We started receiving evacuees on Saturday May 10 around 1900 hours,” said Thunder Bay Fire Chief John Hay. “We had three flights with a total of 140 evacuees. On May 11 we received the remainder of our scheduled 600 evacuees with 10 flights arriving. We registered at two hotels and the final number is 595, five people short of the 600 we said we could take.”
Hay said three flights of evacuees were scheduled to leave Kashechewan on May 12 to Kapuskasing, one to Timmins and another three to Ottawa. Buses were also scheduled to transport evacuees to Cornwall.
The Canadian Red Cross is providing personal services for the evacuees, including baby formula.
“People seem to be settling in really well,” said Sarah Mak, emergency response team leader with the Canadian Red Cross in Thunder Bay. “We are getting them the items they need, but hopefully the city will be planning activities for them. There is a spot set up in the hotel for Elder’s tea and those kinds of things.”
The federal government provided three Royal Canadian Air Force C-130 Hercules aircraft for the evacuation of about 1,500 Kashechewan community members in response to a request for assistance from the province. Eight members of 3 Canadian Ranger Patrol Group were also assisting with voluntary evacuation efforts.
“Our thoughts are with the people of Kashechewan, forced to leave their homes by these perilous flood waters,” said Steven Blaney, minister of Public Safety and Emergency Preparedness. “I want to thank the Canadian Armed Forces for their dedication and professionalism while evacuating the residents of Kashechewan. I also want to commend our provincial and municipal partners, as well as the Canadian Red Cross for the tremendous and tireless work being done in the face of this challenge.”
Bernard Valcourt, minister of Aboriginal Affairs and Northern Development, said officials from his ministry were either at, or en-route to all four host communities to provide assistance.
“Our government’s priority is the health and safety of all Canadians, that’s why we are working closely with the First Nations and our provincial partners to ensure that the immediate health and safety needs of the evacuees are met,” Valcourt said.