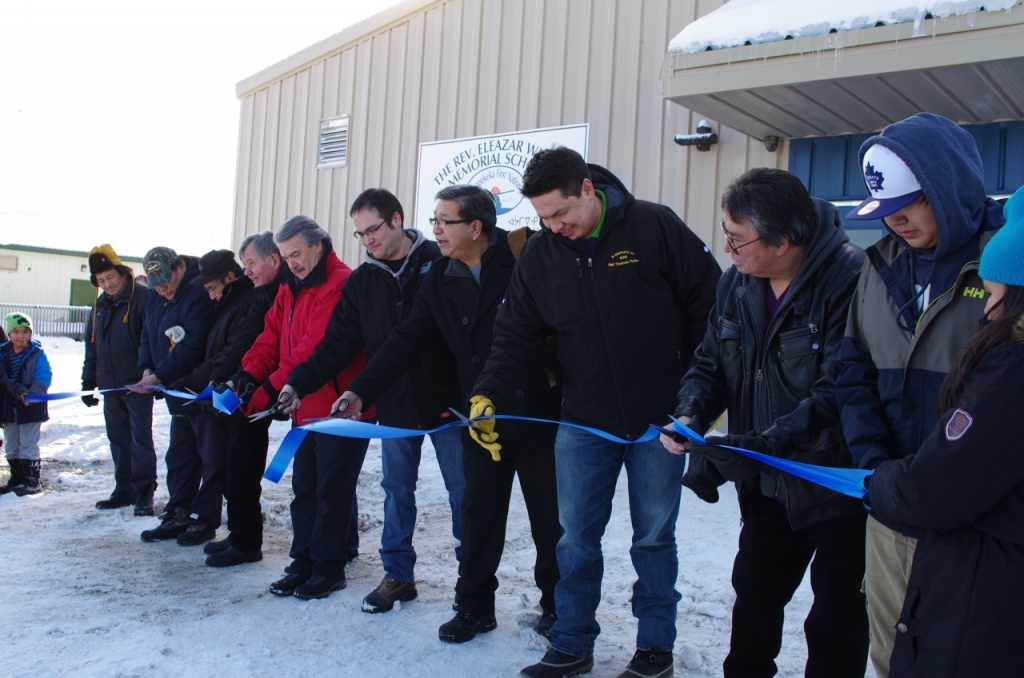 Classroom attendance has increased in Wapekeka since the temporary Reverend Eleazar Winter Memorial School was opened on Jan. 11. The community’s former school burned to the ground in May 2015.

“The students have more freedom to roam around,” says Reverend Eleazar Winter Memorial School principal Ivan Sakakeep. “Even during recess some of them don’t even want to go out; they just want to play inside the hallways. That’s how happy they are; there’s lots of room for them.”

Sakakeep says the students and school staff had been under increasing stress since the fire as they had to teach and study in cramped classrooms in the community hall and the Wahsa building. The school has about 109 Kindergarten to Grade 8 students.

“But we made it through,” Sakakeep says. “We (staff) were just being patient with each other and trying to work together. It was also getting to a point (where) it was very stressful for students too, because there was not enough room for them to move around. We had to concentrate on core subjects like Math, English and Science. That was all we could do because we had to divide the classrooms to half days, like from Kindergarten all the way to Grade 6. In the Wahsa building, we had Grade 7 and 8.”

Sakakeep says the fire was a shock for the community, noting he initially learned about the fire through a phone call from one of his students.

“It was one of my Kindergarten students calling me saying our school burnt down, and she was half crying,” says. “She asked me when are we going to get a new school, and how. But I couldn’t answer that question because I was shocked to hear the school burnt down.”

Eight-and-a-half months later, the opening of the temporary Reverend Eleazar Winter Memorial School was celebrated on Feb. 3 with a ribbon cutting, tour and feast attended by chiefs and other dignitaries.

“It’s actually pretty impressive what they were able do in that short period of time to get a temporary facility in place for the students,” says Grand Chief Alvin Fiddler. “To me, it just speaks to their determination, that they are willing to do anything to work towards a more permanent facility.”

Fiddler says the community needs a permanent facility with the features found in other schools, such as a gymnasium and a science lab.

“If they are successful in their efforts to have Grade 9 and 10 in the community, I think you need all those pieces in the facility,” Fiddler says. “That is something we will work with them on to ensure they have (those pieces) in their permanent facility.”

Deputy Grand Chief Derek Fox congratulated the community for their “tremendous” efforts to ensure their children’s education continued with as little disruption as possible.

“We are proud to celebrate the opening of this temporary facility so these children can continue with their education in a suitable environment while a new facility is constructed,” Fox says. “We encourage the government of Canada to work with the community so a new school can be constructed as quickly as possible.”

Wapekeka Chief Brennan Sainnawap says his community was “devastated” after the fire destroyed the school.

“This new interim school has brought happiness and joy, as well as a strong desire to learn, to all our students,” Sainnawap says. “The interim school will also restore our residents’ feeling of community and self-sufficiency.”

The temporary school was built through more than $5 million in funding from Indigenous and Northern Affairs Canada.

“Losing a school to fire is a difficult situation to overcome for students, school staff, parents and the community,” says INAC Minister Carolyn Bennett. “The Wapekeka First Nation community has been resilient and I have been impressed with their determination to ensure students keep learning through this challenging time. All students deserve to have a learning environment that is both safe and supports their success. This interim school is an important milestone in restoring a safe and stable learning environment to the students of the Wapekeka First Nation.”

Plans call for a new school to be built in a few years through a partnership with INAC and Shoal Lake No. 40.

“We signed an agreement with Shoal Lake No. 40 on Dec. 10 to work together to bundle these two schools,” says Joshua Frogg, Wapekeka’s band manager. “It will be like one project instead of two separate projects. It should speed up the process. The normal process for building a school is six years, so we are trying to shorten that to within maybe four years. It’s challenging, it’s very ambitious, but I think it can be done. We are working with two tribal councils, Indigenous Affairs and two First Nations.”