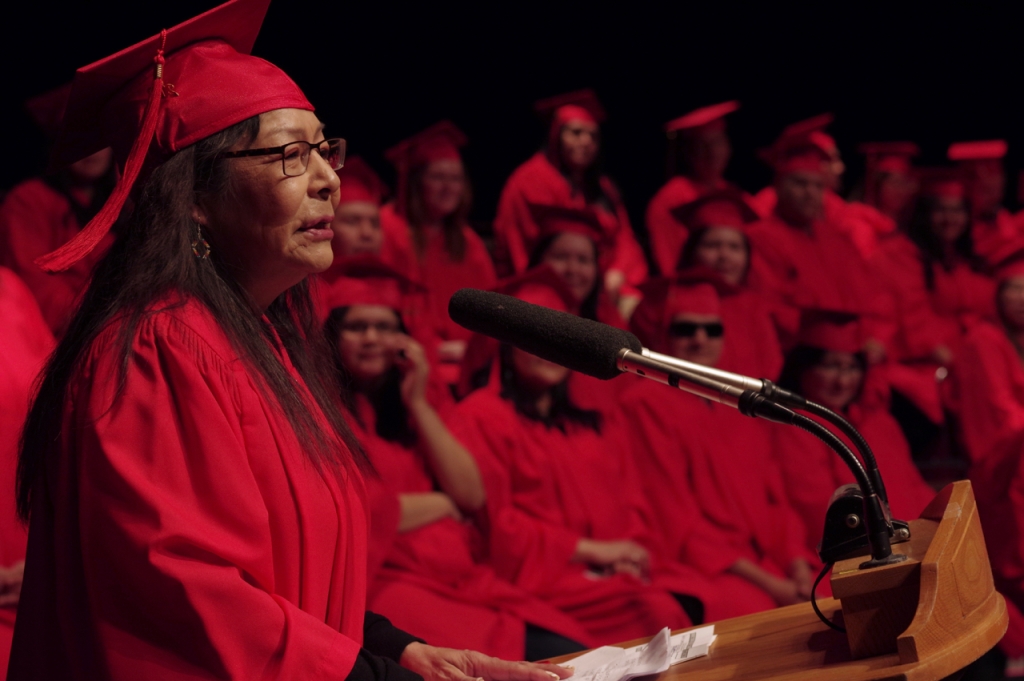 “This is a glorious occasion for all of us, a new chapter in our lives,” Boyce says. “As I stand before you here today, I am really blessed and humbled.”

Boyce says the graduation ceremony doesn’t mark the end of the graduates’ education journey, but the beginning.

“As I think of myself standing here, I can’t help but think of to journey we all have been through to get where we are today,” Boyce says. “There were personal and family tragedies, personal issues we had to deal with as we continued on. One thing is evident, we didn’t give up. We’re all here.”

Meeseetawageesic says he and his wife used to talk about what it would be like to move to Thunder Bay and go back to school. He says that opportunity finally came in 2016 when his wife enrolled in the ASAP program and eventually graduated with her Ontario Secondary School Diploma (OSSD) in 2017. He then enrolled in the program.

“After being out of school for so long, I was nervous and excited at the same time about being back in school,” Meeseetawageesic says. “I’ve always wanted to be back in the classroom learning new things, meeting new people (and) working towards accomplishing my goals and my dreams. It has been a long nine months for most of us, but this year alone has been really great. I got to meet new people, form new friendships and memories that will last a lifetime.”
Meeseetawageesic says the graduates have to dream big and never give up on their dreams.

“If you do, you will spend the rest of your life regretting it,” Meeseetawageesic says. “Don’t ever give up on your dreams, don’t let anything stand in your way of accomplishing them. For some of us, we will go on to do great things, we will make a difference in someone else’s life.”

Boyce and Meeseetawageesic were among 66 graduates who were celebrated for successfully completing the 2017-2018 ASAP program. In addition to obtaining their OSSDs, many students also completed their post-secondary entrance requirements during the program.

“It’s another wonderful day to be sharing and participating in the successes of our young people,” says Roger Wesley, executive director of KKETS. “Many of them are young adults and middle-aged adults who have decided to return to their educational journeys, so it’s a real honour to be here today.”

Wesley says the KKETS staff provide a lot of support and counselling for the students.

“We make it personal,” Wesley says. “And I think that is the success of the story. With that personal touch we get to maintain a higher retention, and thus we end up with a higher graduation level than other programs.”

“It’s such a great thing to see 66 of our young adults graduating from this program,” says Deputy Grand Chief Anna Betty Achneepineskum. “It’s wonderful to see our graduating classes growing and growing every year, whether it’s KKETS or university, colleges. That message of education leading to success and opportunities is there, and we need to continue sharing that message.”

The ASAP graduation was held at the Thunder Bay Community Auditorium with a grand entry drum song by the Matawa Learning Centre Drum Group and remarks by Grand Chief Alvin Fiddler and other officials.