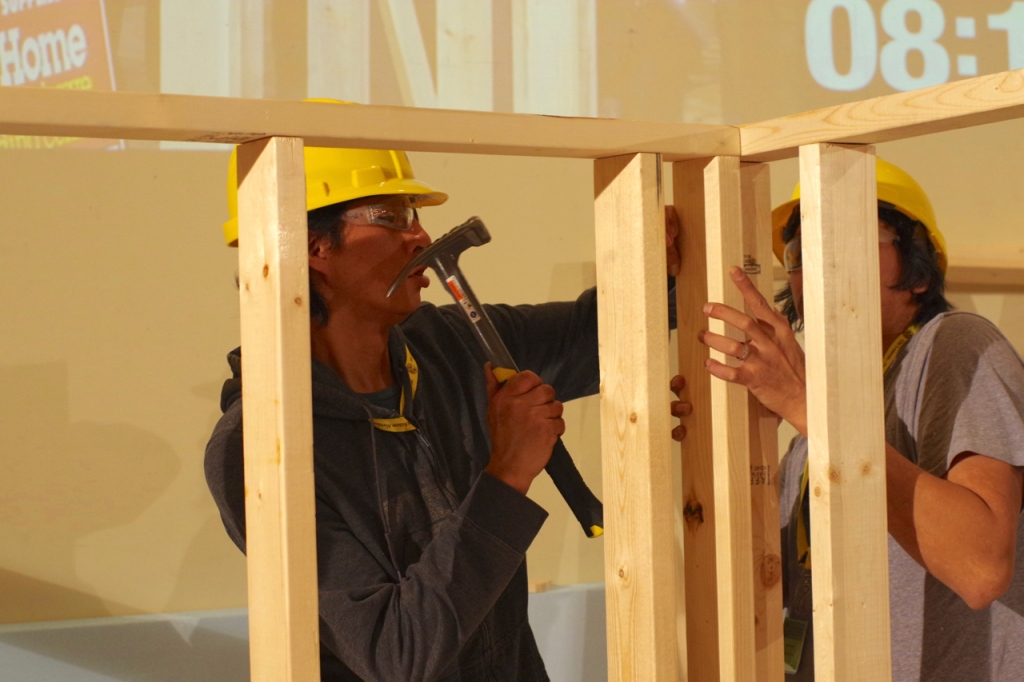 “We split up half the work independently,” says the technical services intern with Pwi-Di-Goo-Zing Ne-Yaa-Zhing Advisory Services, who teamed up with Nigigoonsiminikaaning (Red Gut)’s Clayton Windego for the third segment. “We were trying to do a speed challenge, but we worked safely and with accuracy. There were a very few times when we were confused about what to do, but we fell in line with each other right away.”

Friday enjoyed watching the other competitors having fun during the Builders Challenge advanced framing competition, which was hosted by Jon Eakes, who has been teaching carpentry skills for more than 35 years on television, radio, print and the web. The conference was held Feb. 9-11 at the Valhalla Inn in Thunder Bay.

“I was inspired to participate in the Builders Challenge just from watching people having a good time and laughing,” Friday says. “Overall, it’s a good atmosphere to be in.”

Windego credited some tips from Merv Spence for his success in the third segment, which involved the cutting and nailing of styrofoam insulation to wall studs.

“He gave me a crash course on how to do this,” Windego says. “This (insulation) is easy to work with so I had no problem with it. We tried using the saw for a little bit, but it was going too slow. (With the knife) you can just score the back and then snap it off.”

“Putting the screen in was a little bit tricky,” Anderson says.

“We put the boards on first; we should have put the screen on first, and then the boards,” Kanate says.

“What’s fun is when you even get a crusty older experienced guy saying: ‘Oh, I didn’t know that,’” Eakes says. “You know, maybe we passed something useful on. And if nothing, I hope we found some enthusiasm on this. You can really do it right.”

Eakes says the competitions vary from year to year, with some more difficult than others. This was his sixth year at the conference.

“This one was a relatively straight-forward simple one, but we left them a lot of work, a lot of hammering, to do,” Eakes says. “They weren’t really dealing with fancy details like elastomeric membranes and getting it water-tight around the windows. What was fun is with the advanced framing we were showing things that most people here had never seen. So it was like: ‘Oh, you can do it that way. Oh my goodness.’”

Eakes says the styrofoam insulation provides a thermal break over the wall studs.

“You have a thermal break instead of a thermal bridge,” Eakes says. “And it makes a whale of a difference in the performance of the wall.”

“We’re experienced carpenters,” Wabasse says. “We just followed the instructions. It was fun.”

Two Wapekeka competitors won the second segment with perfect marks across the board.

“It was fun — we had to concentrate on what we were doing,” says Peter Boyce. “We just followed the instructions.”

Boyce says he was asked to compete in the competition.

“So I said OK, because I am coming here to learn,” Boyce says.