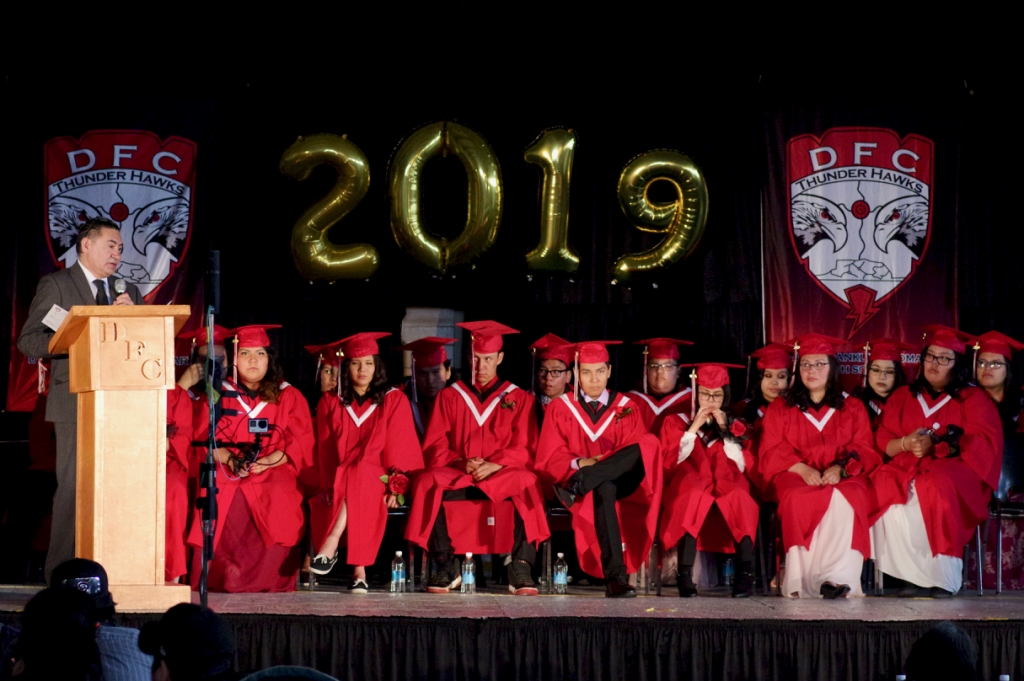 A grandmother originally from Deer Lake attended the 2019 Dennis Franklin Cromarty First Nations High School (DFC) graduation to watch her grandson graduate even though she had just been released from hospital.

“My grandson graduated today and I am so proud,” says Delilah Quill, grandmother of DFC graduate Morley Quill. “All of my kids graduated from DFC. I have three kids and this is my first grandson that graduated from there.”

Quill says she made it just in time for the graduation, which was held at the Canadian Lakehead Exhibition Coliseum building in Thunder Bay.

“I had heart surgery,” Quill says. “I made it in time and I’m very happy. I’m very proud. This is the first (grandchild who graduated) — I’ve still got about six more to go.”

Morley was pleased to see his grandmother at the graduation ceremony.

“I love that woman,” Morley says. “She’s the strongest woman I know.”

The graduation ceremony featured a valedictorian address by Shawnda Mamakwa, a DFC graduate from Kingfisher Lake, and a keynote address by MP Romeo Saganash.

“It was scary at first but as I got to it I spoke from the heart,” Mamakwa says. “I said what I needed to say about the school and how supportive they’ve been throughout the years.”

Mamakwa says the DFC staff were like a second family for her.

“They made us realize we were capable of success and supported us to work to our fullest capability,” Mamakwa says. “They did this by making sure we were not wandering the halls and (were) in class doing our work, that we were safe and well fed.”

Mamakwa says most of the students experienced struggles with being away from home.

“But we got through it with the help from DFC staff with their encouragement and pushing,” Mamakwa says. “We are on this stage to prove it. Being here at DFC, we have built some long-lasting friendships and have great memories.
As for me, my favourite memory was playing volleyball throughout the season just to find out I was 28 weeks pregnant after the season. And now he’s a wonderful baby boy that is here to celebrate this day with me.”

Saganash spoke about the importance of supporting students during his keynote address, noting a First Nations student he went to college with who did not make it through the first year.

“I saw her a couple of years after and I asked her what had happened, and she told me: ‘Well, Romeo, I had no support,’” Saganash says. “There’s support here. For these kids, it is important — keep it up, they deserve it.”

Saganash says the education system is not designed in favour of First Nations people, noting that he was born on the land and lived on that territory for the first seven years of his life.

“The only language I spoke and heard during those first seven years of my life was Cree,” Saganash says. “They tried to take that away when I was in residential school for 10 years. But when I came out I wanted to prove the system wrong. These kids are proving the system wrong, so we must be grateful for that.”

“It’s just a proud day for all of us every time the students are graduating like this,” Kejick says. “It is important to celebrate to show them we acknowledge their accomplishments and that we also support them in having to leave their families to get an education. It’s something they shouldn’t have to do, that every other Canadian takes for granted. So we want them to know we really believe in them and this is what we do to celebrate with them.”