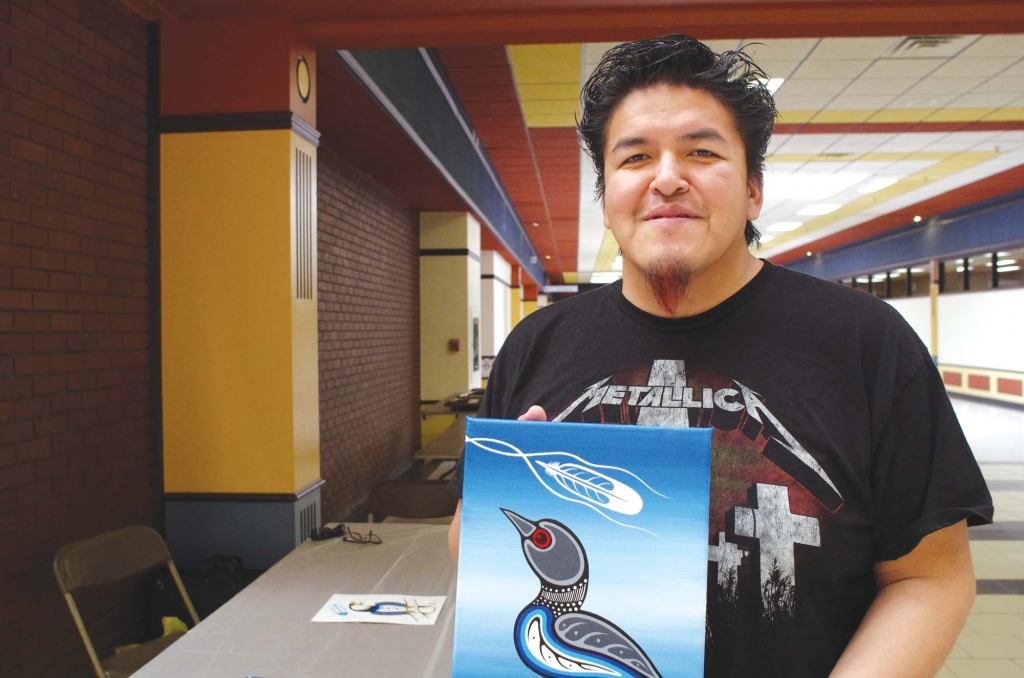 Wauzhusk Onigum’s John Paul Lavand is looking forward to showing his art at the upcoming Northern Ontario Aboriginal Fine Arts and Crafts Exhibition and Sale in downtown Toronto.
“The first time I did my art show in the West Edmonton Mall, it was great,” Lavand said. “And I expect the same in Toronto, seeing that the population is a lot better and traffic should be a lot better. Seeing that we’re coming from the north, we should be actually exposing new ideas which haven’t really been seen down there.”
Lavand was one of about 30 Aboriginal artists from across northwestern Ontario who participated in the 5th annual Sequin Aboriginal Fine Arts and Crafts Show and Sale, held from May 28-31 at the Victoriaville Centre in Thunder Bay.
Lavand began drawing in 1968 at six years old and first showed his art in 1980 at the Centennial Concert Hall in Winnipeg.
“That was probably one of my best shows because I got to meet Norval Morrisseau, Daphne Odjig, Jackson Beardy, Clemence Wescoupe, Joshim Kakegamic,” Lavand said. “I do animals and birds in pen and ink and also have a sort of native-style done in acrylic.”
Lavand usually completes one of his pen and ink drawings in about a week.
“When I first started out drawing in 1968, I pretty much just drew my surroundings,” Lavand said. “I just drew trees, log cabins, trucks, loaders, graders, anything that my surroundings were when I was about six years old.”
But when Lavand’s father moved the family to Saskatoon so he could attend college, Lavand began drawing images of the city landscape.
“I started doing skyscrapers, buildings,” Lavand said. “It was a totally different world.”
Lavand eventually began drawing images of owls, first from photographs but later by working with the owls themselves.
“I used to do a lot of mending wings with great horned owls and great grey owls,” Lavand said.
Although Lavand has worked as a graphic designer and an apprentice with an architecture firm, he felt his art suffered while working at a job.
“I felt that every time I was working at a job, my art was suffering so I just kept going back to my artwork,” Lavand said.
John Ferris, the coordinator and founder of the Sequin arts and crafts sale, is looking forward to travelling down to Toronto with some of the Elders for the upcoming Northern Ontario Aboriginal Fine Arts and Crafts Exhibition and Sale.
“These Elders are very important — they keep our authentic artworks alive,” Ferris said. “It’s been passed down from generation to generation and the Elders are getting older.”
Ferris said a group of younger artists have begun participating in the Sequin arts and crafts sale with a variety of different art designs.
“Some of them are becoming more contemporary, where some people use hockey logos on their mitts and gloves,” Ferris said. “Also, some (people use) chenille designs, but using Aboriginal colours and beads. I find that a little different and unique in its own way, and people are buying them.”
Ferris said an artists marketing workshop was recently held to help the artists on their presentation, how to communicate with customers and how to price their artwork for the upcoming Northern Ontario Aboriginal Fine Arts and Crafts Exhibition and Sale in Toronto.
“People (in Toronto) are probably more willing to spend more money on Aboriginal authentic artworks,” Ferris said. “We’ll have some interpreters there as well to work with the Elders that are going to be there. I am pretty sure the customers will be asking questions about how long they have been doing this, where did you learn this from and also the area where they live.”