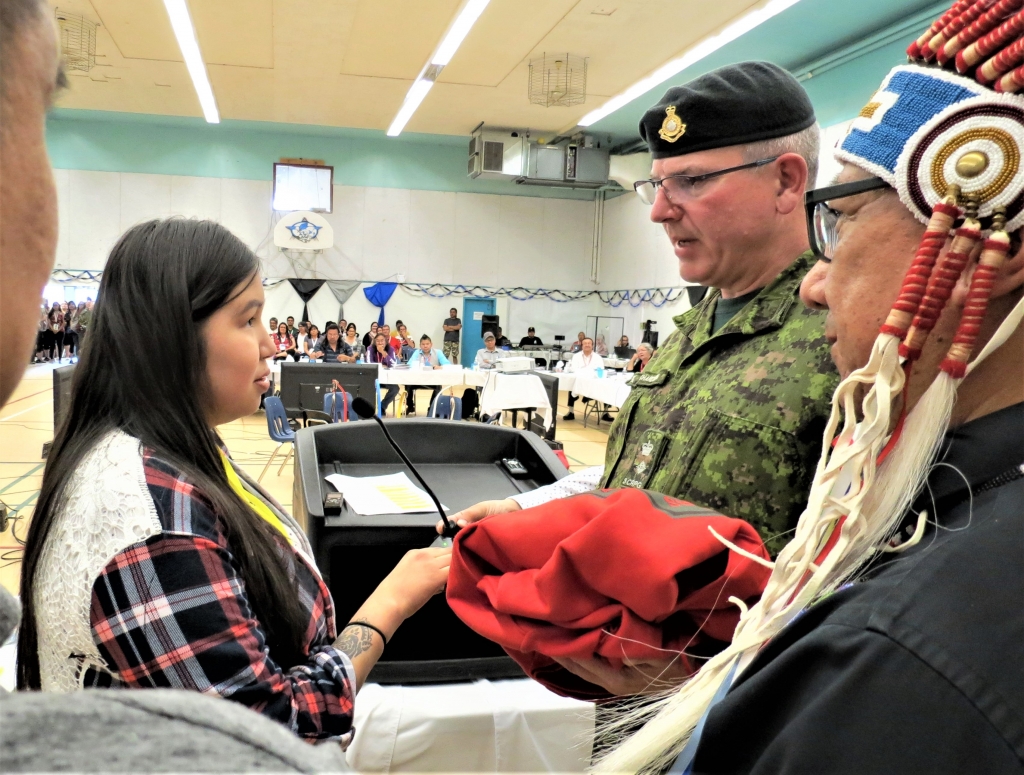 It was a day Shawnda Mamakwa is unlikely to forget.

She received the annual Keewaywin award for being the year’s outstanding youth in Nishnawbe Aski Nation (NAN) and she was sworn in as a new Canadian Ranger before the assembled chiefs, delegates, and observers at this year’s Keewaywin Conference in Kingfisher Lake First Nation.

As a new Ranger, Shawnda, 19, becomes a part-time army reservist with the Kingfisher Lake Ranger patrol.

She was sworn in by Lieutenant-Colonel Matthew Richardson, the Canadian Army officer who commands the 640 Rangers in 27 remote and isolated First Nations across the Far North of Ontario.

Afterwards she posed in her red Ranger hoodie for photographs with NAN Grand Chief Alvin Fiddler, Colonel Richardson, and Kingfisher Lake Chief Eddie Mamakwa. Then, to applause, she held her two-month-old son Ashton in a traditional Oji-Cree cradleboard for more photographs by relatives and friends.

Nishnawber Aski Nation represents 49 First Nations in an area bigger than the size of France in Northern Ontario. Kingfisher Lake, with a population of 640, is 520 kilometers north of Thunder Bay.

Shawnda was nominated for the prestigious Keewaywin Youth Award by Dennis Frankin Cromarty High School, an Indigenous high school in Thunder Bay, which she attended because there is no high school in Kingfisher Lake. She played a leading role in the school’s activities, achieved academic excellence, and was the graduating class’s valedictorian in May.

She became a Junior Canadian Ranger when she was 12 and continued in the program while in Thunder Bay. “It was a good experience,” she said. “I enjoyed learning new skills and techniques and being on the land. I went to Camp Loon (an annual leadership camp for Junior Rangers) and I learned a lot there.”

Becoming a Ranger when she became old enough has been an ambition for a long time. Being called forward to be sworn in as one at the conference was a surprise. “It was a really big surprise,” she said. “I didn’t know anything about it. I didn’t think I’d be a Ranger as fast as this.”

“They provide support to their chiefs and councils and to their community citizens,” he said. “From time to time we hear in the news of another successful rescue mission, whether it was in Kashechewan recently where they rescued two missing boaters (and) they were able to go out and locate them and bring them home safely. You hear about their finding a lost hunter in Peawanuck, and so many other examples.”

He also praised the Canadian Army’s Junior Ranger program for boys and girls aged 12 to 18. In Northern Ontario there are more than 1,000 Junior Rangers.

The grand chief has visited Camp Loon, the advanced leadership camp for Junior Rangers that is held annusally in the bush north of Geraldton.

“A number of our Junior Rangers go there and receive very valuable training that is so important for them as young individuals,” he said.

“So many of our communities are joining the Junior Ranger program. Our youth are struggling with their own well being, with their own mental health. Their self esteem may be low. But with the skills they are acquiring at Camp Loon and at (Junior Ranger) training camps throughout the NAN territory their self esteem is growing and growing… We need to ensure (the program) continues to grow in our communties.”

He thanked Colonel Richardson for his service to the First Nations of Northern Ontario during the past six years in which he had been the commanding officer of 3rd Canadian Ranger Patrol Group, which commands the Rangers of Northern Ontario. He is moving to another position with the army at the end of the month.

“Matt has been so instrumental in creating and building that service right throughout the NAN territory, expanding it from community to community” he said. “We want to thank him”