Dog team rides a “blast from the past” 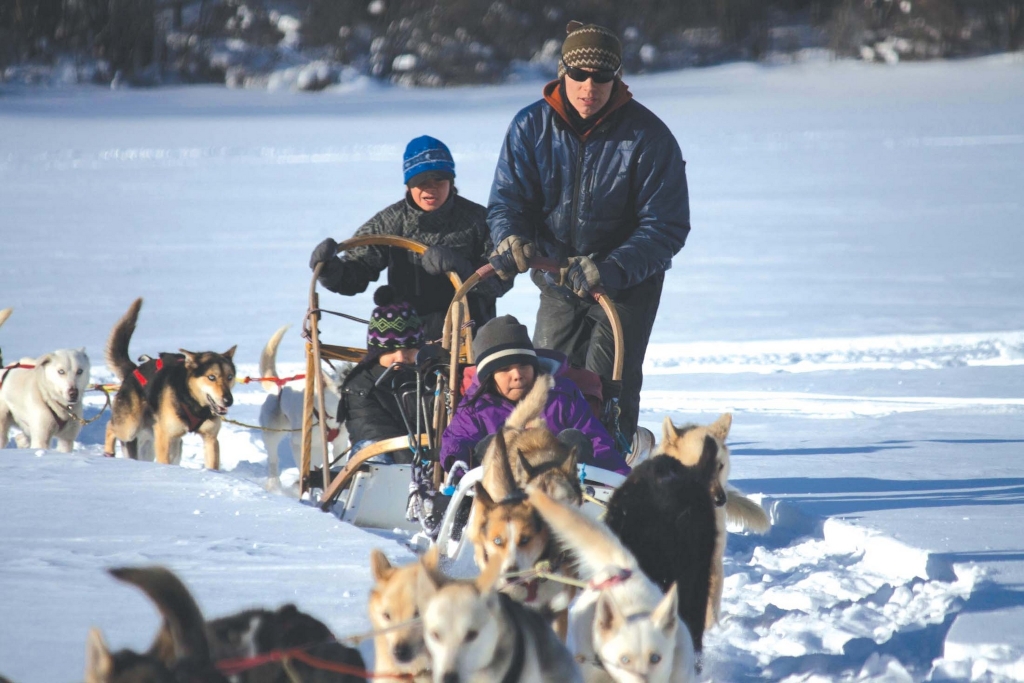 Lac Seul’s Jesse Terry and his sled dog team brought the past back to life for a number of First Nation communities this past winter.
“It was a little blast from the past,” said Ralph Bekintis, vice-principal at Thomas Fiddler Memorial Elementary School in Sandy Lake. “Four hundred kids went and had a good time. They had to do a lot of runs.”
Bekintis said a number of teachers also took the opportunity to ride on the dog sled during Terry’s two-day visit in February.
“The kids all loved it and I think everybody had a chance to get on the sled,” Bekintis said. “I would recommend that to any other community that wants to do dog teams.”
Bekintis said some parents even brought their babies out for the dog sled rides.
“If he had stayed a little longer, we could have had the whole community out,” Bekintis said. “I was one of the last ones to get on and do a ride — I had to experience it myself. It was nice, I enjoyed it. I had never been on a dog team sled before.”
Bekintis said many of the older community members recalled having their own dog teams in the past.
“It opened up memories for a lot of the community people here,” Bekintis said. “The older ones would say: ‘Yeah, we had dog teams.’”
Terry said this past winter was his busiest for dog sled visits, noting he spent a lot of time travelling over the winter roads to bring the dog sledding experience to youth across the north.
“One of the big things I really love about the work I do is seeing the youth get involved,” Terry said. “They love being around the dogs when they are working.”
Poplar Hill health director Barbara Strang said this was Terry’s second visit to her community with his dog teams.
“The people in the community enjoyed seeing that because it reminds them of their great grandfathers,” Strang said. “That’s what they used to do before we had vehicles or (snow machines). We try to (teach) the students to know what it was like before, what their grandparents were doing when they were hunting and getting firewood.”
Although the deep snow this winter was “good” for the sled rides, Terry said it was “tough” to keep the trails open.
“It was a lot of work all winter to keep the trails usable,” Terry said. “The dogs can break trail, but when I’m giving rides and working with people, it’s much nicer if they have a trail that is packed to run on versus breaking trail at a slower speed.”
Terry encouraged community members to break trails for his dog team before he arrived in their community.
“When I’m running my dogs around home, I have set trails that I use where I run them on,” Terry said. “Those trails are open and I don’t expect my dogs to break trail through metres of snow while giving rides. It would be pretty near impossible to do that.”
Martin McKay Memorial School principal Vibha Badhwah said there was “lots of snow” in Sachigo when Terry arrived with his dog team.
“As soon as he arrived he set up the dogs and set up the track and immediately the rides started,” Badhwah said. “The kids were so happy seeing the dogs. They went near the dogs and they were asking their names. It was new for all the kids.”
Badhwah said the dog sled ride was a “very traditional cultural experience” for the students.
“A long time ago the transportation system was through the dog sled,” Badhwah said. “It was a very practical learning for some of our students.”
Terry said some of the Elders in the communities also recalled growing up with dogs and witnessing the use of dog teams for work in the past.
“Now you don’t see that in First Nation communities anymore,” Terry said. “The big part of the reasoning behind my work is to encourage the use of dogs for work and for recreation. It’s just part of a healthy lifestyle for First Nations people. Much like canoeing, an activity like dog sledding is part of Anishinabe culture and it wasn’t too long ago, a couple of generations back where you saw much more wide use of using dogs for work, whether it’s for checking your trap line or for getting firewood or to go hunting.”
Terry said dog teams could be fed a variety of fish and wild game.
“Whenever anyone gets a large animal, there is quite a lot of meat that gets discarded,” Terry said. “That’s all perfectly edible meat, and for the dog it doesn’t make any difference, they’re just happy to eat meat.”
Terry began running dogs when he was about 10 or 11 years old while growing up on Abram Lake south of Sioux Lookout.
“Now that I’m living back at home in the Sioux Lookout area, I’m really starting to grow the kennel and the number of dogs in the yard,” Terry said. “I’m using the dogs for more than recreation, I’m using them for work now.”
Terry has also entered a number of dog team races over the past few years, including the Hudson Bay Quest Dog Sled Race, a 330-kilometer race from Gillam to Churchill, Manitoba along the coast of Hudson Bay.
“Two winters ago I came in sixth,” Terry said. “But more than that for me, I won the veterinary award, which is given by the vet who looks over the dogs at the beginning and the end of the race. It’s given to the musher who they feel has the best dog care during the course of the race.”
Terry plans to provide wilderness first aid training this summer with his father, Tom Terry, through Sirius Wilderness Medicine, a Quebec-based agency. The course provides instruction on how to properly care for an injured person in the out-of-doors and how to safely get them out to medical care.