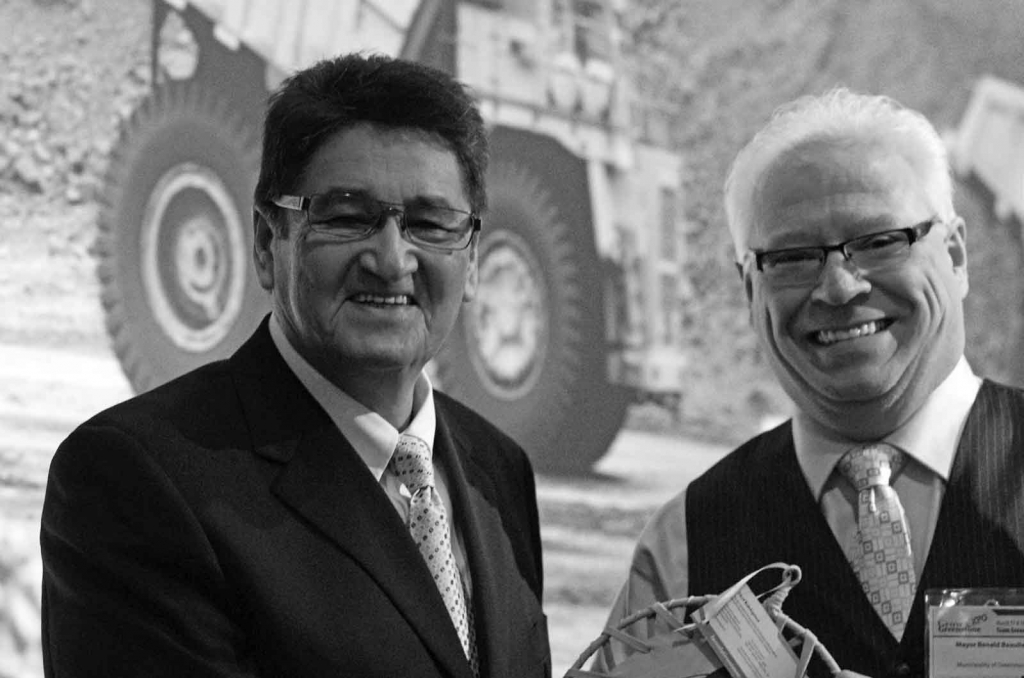 Former national chief Ovide Mercredi called for mutual advantages from resource development during the Grow Greenstone Expo, held March 17-18 in Thunder Bay.
“It’s time for us to remind ourselves, as the Supreme Court of Canada said, we are all here to stay — and we better learn to get along,” said the Misipawistik Cree Nation councillor.
“That’s not going to be easy, because the First Nations people, because of their oppression over the centuries, are not very trusting right now. And you can’t really blame our people for lacking trust because of the way we have been impacted by Canada as a country.”
Mercredi asked what right do companies have to develop First Nations territory without their consent.
“People need to be involved, they need to be consulted, they need to be part of the plan,” Mercredi said. “And we are not part of the plan — not yet.”
Mercredi said Canada made treaties with First Nations people soon after the country was founded in 1867 “in order to make room for themselves to expand the boundaries of Lower and Upper Canada.”
“But these treaties were also based on this idea that the First Nations people could keep their culture, they could keep their way of life,” Mercredi said. “Now, what does that mean in contemporary times. It should mean that they should be able to drink the water from the lakes and rivers without having to boil it, because that is what they had before the treaty was made. And it should mean that they should be able to carry on with their hunting, fishing and gathering lifestyle on their natural territories without having the habitat destroyed by development.”
Mercredi said the treaties are also about protecting the land and the plants and wildlife that live on the land.
“Because if development is done without any concern about the environment, the treaty right to hunt becomes meaningless,” Mercredi said. “If there are no animals, there is no treaty right to hunt.”
But Mercredi said First Nations people are also “very much interested in mutual gain.”
“The First Nations people are not isolated from each other — they are very connected to each other,” Mercredi said. “We are informed — we are aware of what we want and we are very much interested in the dialogue that has been missing.”
Mercredi questioned the idea that First Nations people gave up title to their vast lands and territory for small reserves and an annual treaty payment of $4 or $5.
“Where in the world can you buy that much land for $5 dollars a year,” Mercredi said. “And if you look at treaty negotiations right now where there is unceeded territory. like in British Columbia, those negotiations have been taking place for 20 years without no conclusion.
Nobody is going to say to me that in my community my people surrendered their territory in one day. I refuse to believe that. I rather believe what my people tell me — that we agreed to share the land but we did not give up everything.”
Mercredi recalled an Elder’s statement about the community’s territory that he heard when he was a youth.
“As far as your eye can see, all the land around you see is ours and all the waters you see still belongs to us,” Mercredi said. “My reserve is only about two miles by about five miles. Our territory is bigger than that by probably a thousand times.”
Mercredi said it is important for the federal government to deal with treaty implementation.
“Those treaties have to be interpreted, not just in favour of Canada, but for mutual benefit,” Mercredi said. “They have to be interpreted in favour of the Aboriginal people too. It cannot be one sided.”
Mercredi called for a better relationship in the future, noting that prejudice and racism have to be challenged.
“Those negative feelings prevent us from creating a good relationship,” Mercredi said. “I’m not asking you to marry me or to love me or even to kiss me. I’m saying, quite simply, that if we have a common vision about development in the north, it should be based on the historical relationship, which was mutual gain and friendship.”
Mercredi said future development has to be done with the consent and full participation of First Nations people.
“Development should never happen in the way it happened in my community,” Mercredi said. “When (Manitoba Hydro) came there they built a townsite for their workers, completely segregated from my community. Hydro has been in Grand Rapids for almost 45 years now, and two years ago they finally extended water and sewer to the village. Imagine that, like it would take that long for them to share that quality of life with a Metis community. They never shared that quality (of life) with the reserve, because the reserve got the money from Indian Affairs to have water and sewer 10 years ago.”
Mercredi made his comments on March 18 during his presentation: Taking Northern Development Back to Mutual Advantage.