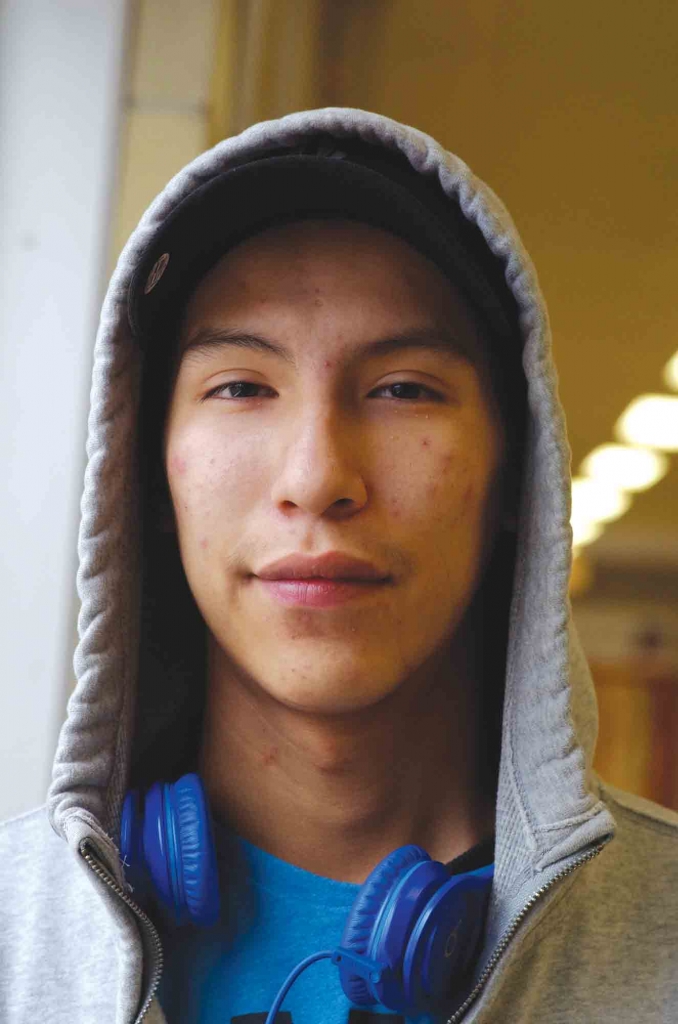 Sandy Lake’s Scott Meekis is excited about reaching the finals in the Enter the Den business writing plan competition for Thunder Bay high school students.
“I was amazed — I wasn’t even sure I was going to pass on to the semi-finals,” said the Grade 12 Dennis Franklin Cromarty First Nations High School student. “When I handed it in, I was thinking I wasn’t going to be chosen. I was surprised when my teacher told me (I was in the finals).”
Meekis said the staff and students at DFC have been congratulating him on making the finals.
“Good job man, keep going, you got this,” Meekis said, quoting some of the comments he received. “They were encouraging me and I feel confident about it.”
Meekis developed his business idea from the traditional beading crafts his mother, Nora Jane Meekis, and his grandmother have always created.
“I’m very proud of him,” Nora Jane said. “I’m glad he’s been noticing what I’ve been doing.”
Meekis was one of about 140 high school students from across Thunder Bay who entered the Enter the Den competition this year. The competition was inspired by the popular Canadian television program, the Dragon’s Den, but it features a gentler format with practical feedback provided to every participant. The top three finalists will receive $1,500, $1,000 and $500 cash prizes based on the research, presentation and defence of their business ideas during the final competition on May 22.
Nora Jane was surprised when she found out her son had made the finals.
“The first time I heard about it was when the school principal called,” Nora Jane said. “My son didn’t tell me that he entered that contest, but I am very proud that he accomplished that. I’m very excited for him.”
Nora Jane plans to take her son shopping when they travel down to Thunder Bay for the final competition.
“He will put on a business suit,” Nora Jane said.
Nora Jane emphasized that she provides plenty of support to her children while they are pursuing their education.
“I keep calling the school, or even when he was going to school here, I kept calling the school to ask about his marks and his attendance,” Nora Jane said, noting she often encourages Scott to get his marks up higher.
“I always tell him when you set your mind to it, you can do it. One time his mark was below 50 and he still had four weeks of school, so I said you better get your mark up, you need to pass that course. And he did, he got it up to the 70s.”
DFC principal Jonathan Kakegamic said the school is proud of Meekis’ accomplishments.
“This just shows that any First Nation youth, given the opportunity to compete, can compete with any other youth here in the city and in Canada,” Kakegamic said. “We hope that it continues. It’s a perfect example that First Nation education is working. I hope other kids will see it and strive for that.”
Meekis originally first placed second for his beadwork business plan in the Grade 11 Entrepreneurship class at DFC last year.
“A year later he enrolled in Grade 12 Entrepreneurship and he continued his business idea with an online business focus,” said Brandon Wright, DFC’s entrepreneurship teacher. “He entered the (Enter the Den) competition in March this year and out of 140 applicants, Scott and another student at DFC were selected to advance to the semi-finals. Of those 10, Scott was chosen to advance to the finals.”
Wright said the process has been very rewarding.
“The reason why Scott has been so successful through the Entrepreneurship program and through the Enter the Den competition is that not only does he have a great idea, but he brings enthusiasm and knowledge to his idea,” Wright said. “And that is what judges are looking for — they want to see the confidence behind the idea.”
After his upcoming graduation, Meekis plans to work for the summer back home in Sandy Lake, where his three-year-old son and two-year-old daughter live. He is considering a career in the heavy equipment field.