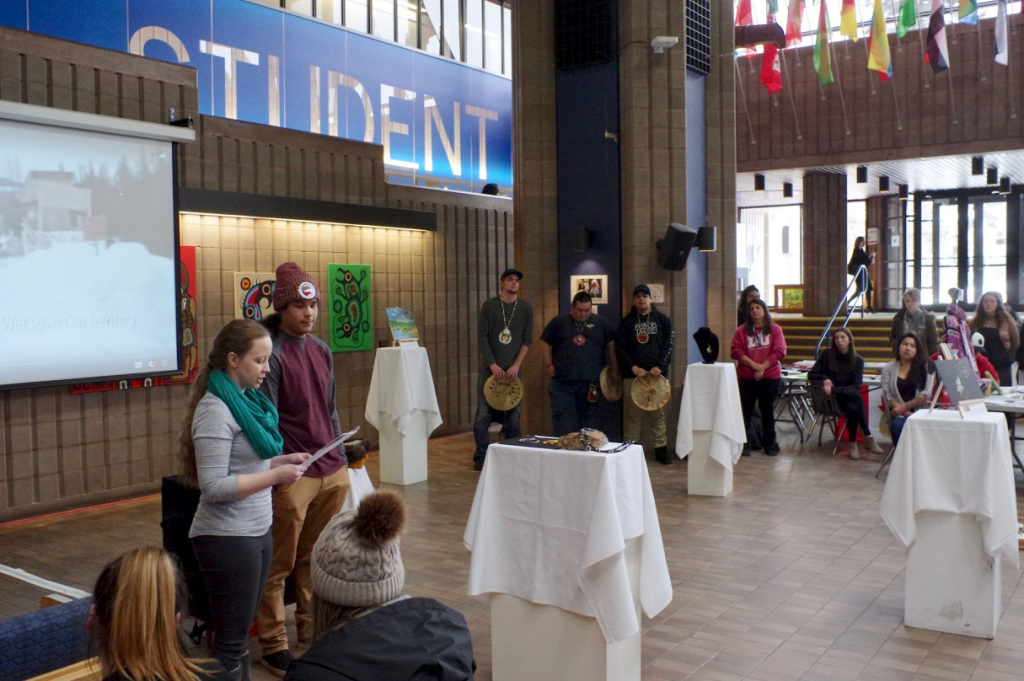 Lakehead University students Amanda Moddejonge and Neebin Scanlon-Wabasse speak about the importance of holding the Act of Solidarity with Wet’suwet’en Nation gathering at Lakehead University. Photo by Rick Garrick.

A group of Lakehead University students held an Act of Solidarity with Wet’suwet’en Nation gathering featuring a film screening and curated display at the Agora.

“We decided to do this because of recent actions of the RCMP going into the Wet’suwet’en territory and forcibly removing land protectors,” says Neebin Scanlon-Wabasse, one of the students involved with the gathering. “We’re just showing our support here today. We’ve got our (Indigenous Narratives, Ceremonies and Myths) class involved here so it’s about 20 people. There is no better place to have an event like this than a university where we could teach the future leaders.”

Scanlon-Wabasse says the students brought in some of the art pieces they had made to exhibit in the curated display.

“They tell stories about reconciliation,” Scanlon-Wabasse says. “(The removal of the land protectors) is obviously the wrong way to go about it in terms of invading the unceded lands.”

Amanda Moddejonge, one of the students involved with the gathering, says the class has been talking about the situation on Wet’suwet’en territory all year.

“Which is great because we’ve actually been able to get into what’s really been happening as opposed to just what you see on the media,” Moddejonge says. “So as a class we decided we wanted to stand together with the Wet’suwet’en people to have their voices heard and respected.”

Moddejonge says the turnout for the Act of Solidarity with Wet’suwet’en Nation was “incredible.”

“It’s really nice to watch people coming and going too,” Moddejonge says. “I’ve had an awful lot of questions which is really nice too because that means people are actually talking about what is really going on and taking the opportunity to educate themselves.”

Moddejonge says the film they screened, Invasion, is available online at: www.youtube.com/watch?v=D3R5Uy5O_Ds&vl=en.

“You can watch this anywhere you are,” Moddejonge says.

Letitia Munroe, one of the students involved with the gathering, says she got involved because it affects not only herself but her people as well.

“It’s a big problem that Indigenous peoples are facing today and that they have been facing,” Munroe says, noting that she created the art piece she exhibited in the curated display about a month ago. “It represents the deconstructive nature of past and current western society and how the traditional ways are changing due to the pollution, fires on reserves, et cetera.”

Munroe encourages people to be aware of what is going on around the world and to take part in events that are happening.

“We have a Facebook page and people are posting pretty positive things like it’s a great thing we are doing as a class,” Munroe says.

National Chief Perry Bellegarde called for the safety and security of everyone in Wet’suwet’en territory.

“People should never be criminalized for standing up for their lands,” Bellegarde says. “The RCMP needs to pull back and the federal and provincial Crown needs to step up and create a space for dialogue with the Wet’suwet’en leadership. It’s clear it’s the only way forward.”

Bellegarde says he has spoken to RCMP Commissioner Brenda Lucki to encourage a peaceful resolution.

“I am further urging the Premier of British Columbia and the federal government to respect First Nations rights and the UN Declaration on the Rights of Indigenous Peoples,” Bellegarde says. “As it stands, the RCMP is only sworn to uphold civil law and common law. If we are to move forward with reconciliation, Canada must also recognize First Nations laws. The AFN supports the governance and decision-making process of the Wet’suwet’en people. Canada and BC must do the same.”