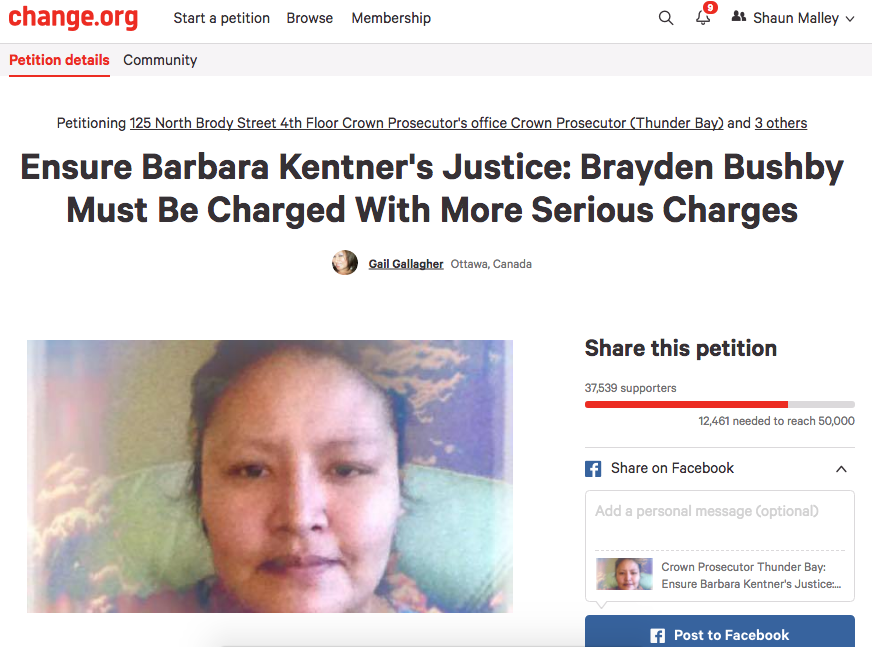 There is a petition to upgrade the charges of aggravated assault to something more serious for Brayden Bushby, the 18-year-old Thunder Bay youth who allegedly threw a trailer hitch that hit Barbara Kentner in January.

The attack caused Kentner serious internal injury which after months of pain, suffering and hospitalization, resulted in her death in July. This sparked the creation of a petition, online at www.change.org, which has more than 37,000 supporters. It has even been translated into French to reach a broader audience.

“Barbara’s family and daughter need justice and this case needs to be properly investigated by the Thunder Bay police and Crown prosecutor,” reads the petition created by Gail Gallagher, an Ottawa resident. “Bushby must not get a slap on the wrist!”

This incident outraged many who called it violent and racist, including petitioner Michael Procinsky of Calgary.

“I’m signing because it is about time our Aboriginal population is treated as first class citizens,” he wrote in the comments section of the petition. “This was a hate crime and he needs to be charged with murder as that was his intent.”

Kentner was a band member of Wabigoon Lake Ojibway Nation, where her aunt Lana Kooshet is a councillor. Kooshet opened up about how merciful Kentner was towards Bushby in the time leading up to her passing. She also discussed how this incident affected Kentner’s family, and what could be done to prevent further crimes of this sort.

Kooshet said that this petition means lots of people want to bring justice to Kentner. She added that maybe the court system would take the word of a group more seriously because numbers carry more weight.

“I think petitions like this should be a catalyst to prevent things like this from happening in the future.” said Kooshet

Kooshet may be onto something, Murray Sinclair, a retired judge and former chair of the Truth and Reconciliation Commission (TRC), is to conduct a review of the Thunder Bay police service. According to a recent CBC article this review comes in response to a recent series of deaths involving Indigenous people in Thunder Bay. He is also investigating alleged racism within the police force, as well as criminal charges laid against the previous Thunder Bay police chief.

Barbara was very forgiving in the days leading up to her passing, according to Kooshet, saying she didn’t want to resent the perpetrator.

“Auntie I can’t hate him, he’s just a child he’s only 18, feel sorry him his life is ruined,” said Kentner according to Kooshet.

Kooshet herself is concerned with how the accused was raised and wondered about his thought processes at the time of the incident.

“I just can’t understand how a person can just deliberately hurt another person like that,” Kooshet said. “What is going on in this child’s head?”

Even in all of Kentner’s pain and suffering, Kooshet said her niece still had compassion for others and was a better person because of it.

“It would be nice if all people thought that way, and maybe this would not have happened if that child had that form of a conscience,” Said Kooshet.

The provincial justice ministry refused to comment for this story because Bushby’s case is before the courts, though they did say it’s up to police to lay stronger charges.