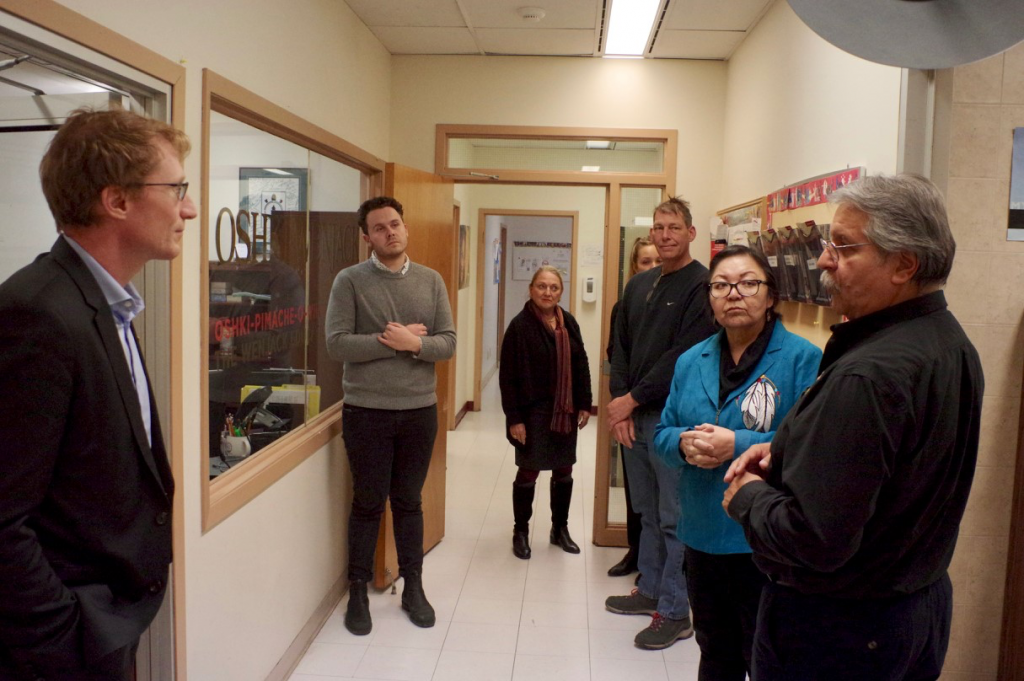 “I thought this was a great space — it’s a great learning environment,” Miller says. “This is something that fills a need that is growing, frankly. This is my first time here but it looks like they are doing an amazing job. The spaces are welcoming and as some of the student testimonials showed it’s an intimate environment where people look out for each other and the student-teacher ratio is low so it gives the opportunity for a full experience in an educational environment that is by Indigenous people and for Indigenous people. So it’s nice to see because you see results.”

Miller toured the third floor of the campus, which has been transformed into more classrooms and a larger kitchen-lounge area where students can prepare meals and meet with each other. The Oshki staff now have offices on the second floor, which Oshki took over after NADF moved to a new office in Fort William First Nation.

“The intent is to increase the number of classrooms and increase the number of office spaces in order to expand our programs for the next couple of years,” says Gary Bruyere, director of finance at Oshki. “We wanted to develop more programs as well as possibly provide additional cohorts within some of the individual programs like ECE (Early Childhood Education). We hope to expand to another university program so we need more classroom space.”
The minister’s tour included a drum ceremony by a group of students with hand drums they made during cultural activities on campus.

“This is my second time returning to Oshki,” says Laurie DePerry, one of the hand drummers who previously graduated from the Social Services Worker - Native Specialization Program in 2017. “The reason why I choose to come to Oshki is because it is small classroom-based, you get more one-on-one with the instructor as opposed to a college or university.”

“I have a traditional background but I wanted to know more,” DePerry says. “I don’t know my language and one of the things is we are learning our language, which is a benefit for me because I want to teach my children and my grandchildren the language.”

“This is brand new — it just started in September,” Falcigno says. “It’s a five-year full-time university program in our blended delivery model which is minimally disruptive to our learners and their relationship with their home communities. They come to Oshki, they do intensive blocks and then they return back to their lives and their commitments. We have 24 full-time students in that program.”

Falcigno says there are about 150 students currently enrolled in Oshki’s eight college and university-level programs.

Rosie Mosquito, executive director at Oshki, says Oshki’s programs are offered in response to needs identified by the communities Oshki serves as well as by potential employers and other partners.

“We’ve created a lot of pathways for further education,” Mosquito says. “Health Sciences is another program we had offered four or five years ago — several of those graduates went on to Lakehead University and got their nursing degrees, and we hear they are all employed.”