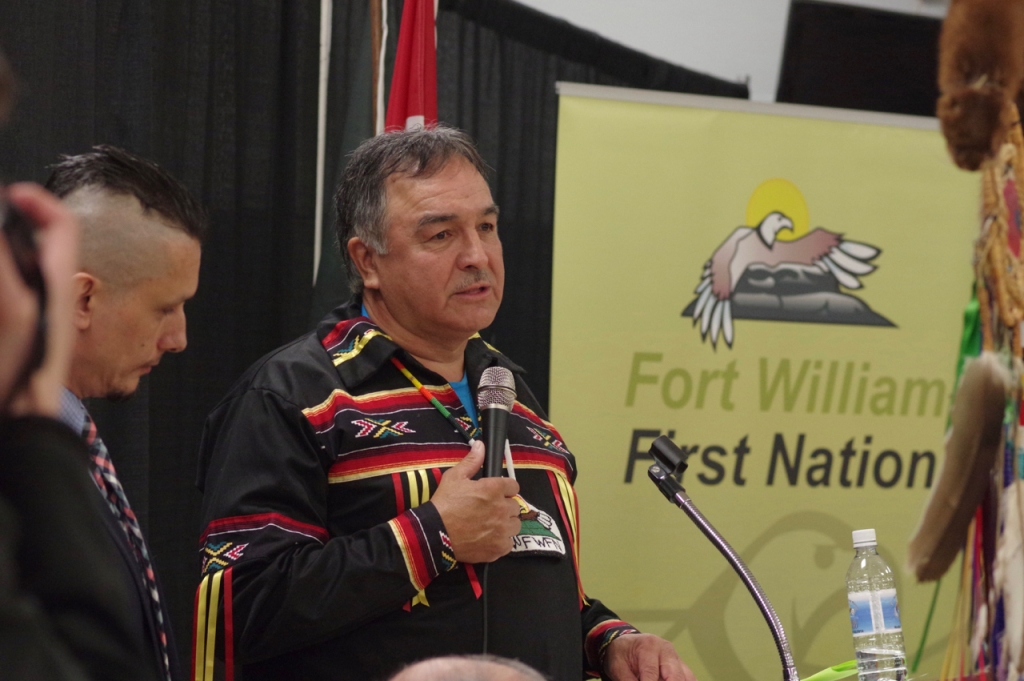 Fort William Chief Peter Collins was sworn in as chief on April 24 after being re-elected to his ninth term during the community’s April 8 election. Photo by Rick Garrick.

Fort William’s newly elected chief and councillors were sworn in on April 24 during the community’s inauguration ceremony at the Fort William First Nation Community Centre.

“To all the members of this community, I want to say thank you for the awesome support … that I got in this election,” Collins says during his inauguration address. “This is my ninth term, and hopefully it is not my last. I enjoy working for this community.”

Collins says he has been working with Thunder Bay Mayor Keith Hobbs to “move the yardsticks” on a variety of issues in the area.

Collins called for the community to work together as one to achieve success. He was elected with 430 of the 759 valid votes cast during the April 8 election.

“Our success comes with unity,” Collins says. “I keep thinking about some famous chiefs like Sitting Bull — let us put our minds together and see what kind of community we can create for our children.”

Collins says the community has work to do on their constitution, a new election code, taxing authority, education and the bridge to Thunder Bay.

“We’re always looking to improve the education in our community,” Collins says. “We just started a new school about eight months ago and we had about 31 people who registered.”

Councillor Michele Solomon was re-elected to her second term with 310 votes.

“I’m happy to know that the people of Fort William First Nation have the confidence in me to continue to help lead our community,” Solomon says. “We have a lot of work to do this coming term. We have work to do with regards to our constitution and our membership and of course the bridge is still a big issue.”

Fort William is looking at building a new bridge just west of the James Street Swing Bridge that was closed to traffic in 2013.

“It would be so wonderful just for our people at Fort William to be able to access emergency services in a more efficient manner than they do right now,” Solomon says. “And to know that we’re not trapped in this community if something happens to the only access point we have right now.”

Councillor Phillip Pelletier was re-elected to his fourth term with 313 votes.

“It’s an honour and a pleasure to serve Fort William First Nation and the community members,” Pelletier says. “And I hope we can do some good things. Addiction is still a problem and we have to work on that. And we have to provide recreation for our youth and get them doing something.”

Councillor Leo Bannon Sr., who was re-elected to his 16th term with 237 votes, has seen many changes in the community over the years.

“This (ceremony) is a big change from way back then — I remember back when the chief used to get sworn in by himself on the steps of the old community hall,” Bannon says. “There’s a big change in our community — a lot of houses, a lot of streets, a lot of lights, pavement, sidewalks.”