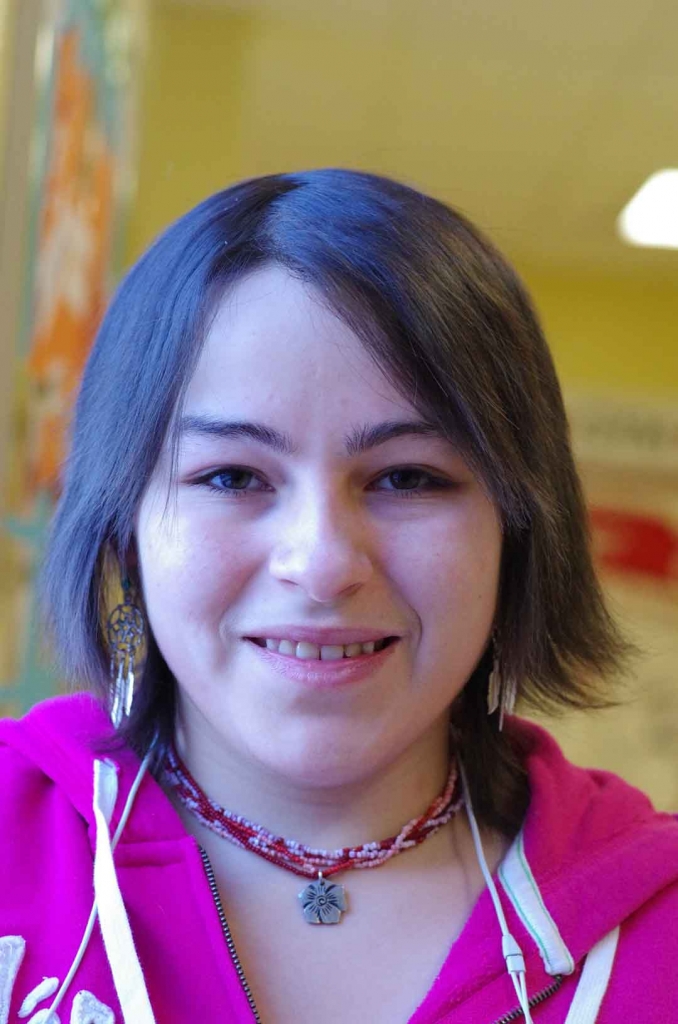 Wapekeka’s Nicole Quedent recently shared her life experiences during the third Human Library project in Thunder Bay.
“I basically told them my life story — how it was like for me living on the reserve,” said the Grade 10 Dennis Franklin Cromarty First Nations High School student. “They were very surprised and they were curious how the buildings would look like if they went to visit the reserve.”
One of eight human books who took part in the Jan. 25 event, Quedent shared her experiences with five people during 20-minute sessions at the Brodie Resource Library. The Thunder Bay Public Library partnered with CBC Radio to host the Human Library project, which was first initiated in Denmark in 2000.
“It was a new experience,” Quedent said. “I was the most popular one booked there and I was very surprised.”
In addition to questions about First Nations culture, language, hunting and trapping, Quedent was also asked if there was a road to her home community.
“I was like: ‘No, the only way you can get there is by plane or winter road,’” Quedent said. “And they asked how much (a plane flight) was per person, and I said close to about $500 or $400.”
Quedent was pleased with the compliments she received from the people who borrowed her.
“They called me a future leader, a survivor, a future chief or a councillor,” Quedent said. “It was surprising for me.”
Quedent also received compliments from students at DFC who had seen her on television.
“One of the other students called me a future chief and council leader,” Quedent said. “I was very surprised because I’m not used to getting compliments. But it makes me feel good inside.”
Quedent encouraged other First Nations youth to participate in future Human Library projects.
“The human book is a good experience if you want to share stories and your experiences of the way you lived,” Quedent said. “And it is a good way to meet new people and for them to understand what First Nations people are and what they go through, in a positive or a negative way.”
Quedent was surprised with the reactions of one of the people who borrowed her.
“I actually made one of them cry in a good way,” Quedent said, explaining she told the woman about how she got the scars on her arm during fights back home. “I made her a bit emotional (when she realized) half of us youth go through that on the reserve.”
Quedent said her life has changed around since she turned 17 years old. She is now 20 years old.
“I attended school in North Bay and then learned my seven grandfather teachings,” Quedent said. “Now it’s changed me into being at Dennis Franklin today. I don’t drink any more; I don’t smoke pot. I don’t even smoke cigarettes anymore. I’m changing my life into a positive life the way I wanted it to be.”
Quedent loves how her new life feels.
“My spirit and my clan inside me just feels so alive,” Quedent said. “I’m on my healing journey again — that’s what I like.”
Quedent’s future goal is to help other youth through their struggles.
“For all the youth on the First Nation reserves, all I would say is don’t give up on your dreams,” Quedent said. “Keep following the goal, take the right path. If you ever feel down or feel like doing self harm, please talk to a person you love and care and trust.”
The other human books included a Muslim Canadian, an Afghan veteran, an immigrant from Sierra Leone, a Paralympic cyclist, a strong man competitor, a CBC Radio broadcaster and an ex-offender.