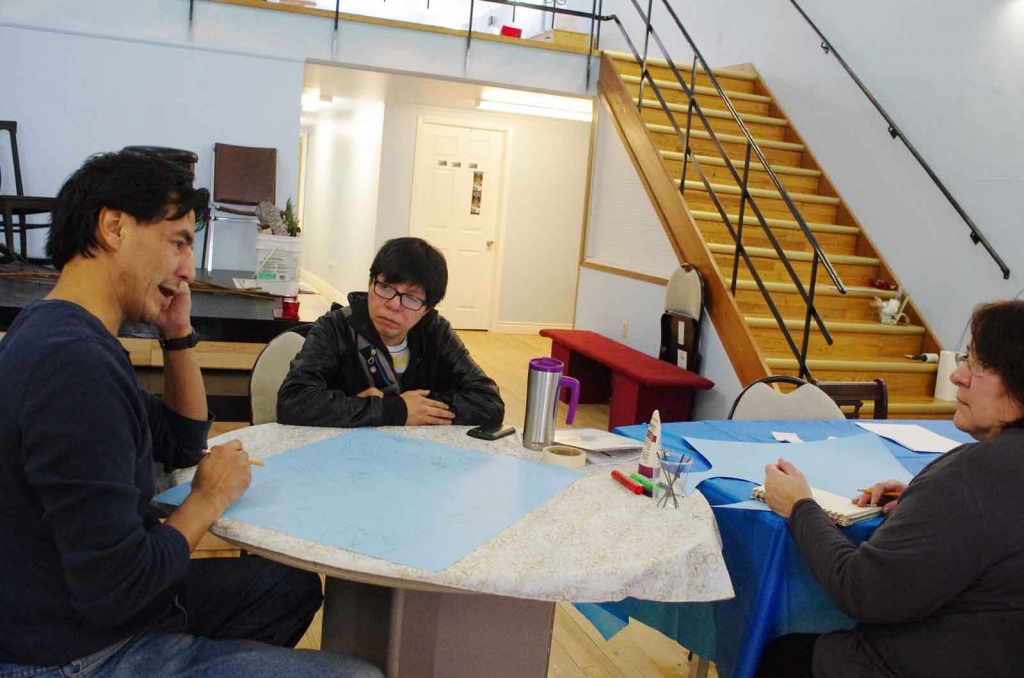 Weekly cedar mask making workshops by Nigigoonsiminikaaning artist Perry Perrault are featured on Saturdays at the Blue Sky Community Healing Centre in Thunder Bay.
“In the beginning, people will draw out their concepts — they will put it on paper and make many concepts, whatever they want to exude,” Perrault said. “Then they will move on to a clay model before they actually carve the wood.”
Perrault said the clay model is an important step in the process because it provides a reference model for carving the wood.
“Before they gouge out too much unnecessarily, they will know from the clay model how much they need to extract,” Perrault said. “What happens with carvers is they get discouraged by gouging out too much and say ‘Oh my gosh, I’ve got to start all over again — that took me a month to get to this point.’”
Perreault said workshop participants need to be at least 18 years of age due to the sharp carving tools they will be using.
“Carving is tedious work,” Perrault said. “It takes a long time and a lot of thought will go into it.”
Perrault said some carvers like to talk while carving while others like to work alone.
“Most artists I know are very private,” Perrault said. “To look into one’s self is a private thing.”
Perrault plans to focus on “talking it out as a group” as the carvers proceed through the workshop, which is scheduled for four Saturdays in January and February.
Although Sand Point’s Margaret Grimard initially attended the workshop to get her grandson involved in carving, she soon discovered an interest in creating a carving as well.
“I had an idea of what I wanted to carve and it’s pretty interesting,” Grimard said. “I’ve painted, drawn, I did clay work and it’s something I want to learn to put my feelings into wood.”
Perrault said the “large, wide-open” Blue Sky Community Healing Centre is a good space for creating art.
“I want a space like this,” Perrault said. “Nineteen foot ceilings. The acoustics are great in here. I can hear them people talking and they are 40 feet away.”
Blue Sky Community Healing Centre lodge keeper and community coordinator Cindy Crowe said the cedar mask making workshop is just one of a wide variety of workshops available, such as yoga, a buddhism study and a WAI/WAY (Who am I/Who are you) self inquiry course.
“The biggest goal for us is that people would be able to realize or acknowledge the very best for themselves,” Crowe said. “They would be the best of who they can be. For some people that might be figuring out what their divine life purpose is. For others it’s simply having peace and serenity in their lives. But it’s to encourage all, everyone who comes here, to be the very best that they can be.”
The Blue Sky Community Healing Centre, located on Victoria Avenue near the Victoriaville Centre, has about 3,600 square feet of space with wide-open windows facing the street.
“Currently, the financing that we are managing on is all private donations,” Crowe said, noting the centre has received funding from the Anglican Church and Catholic Church reconciliation funds. “And we’re also working on achieving charitable status.”