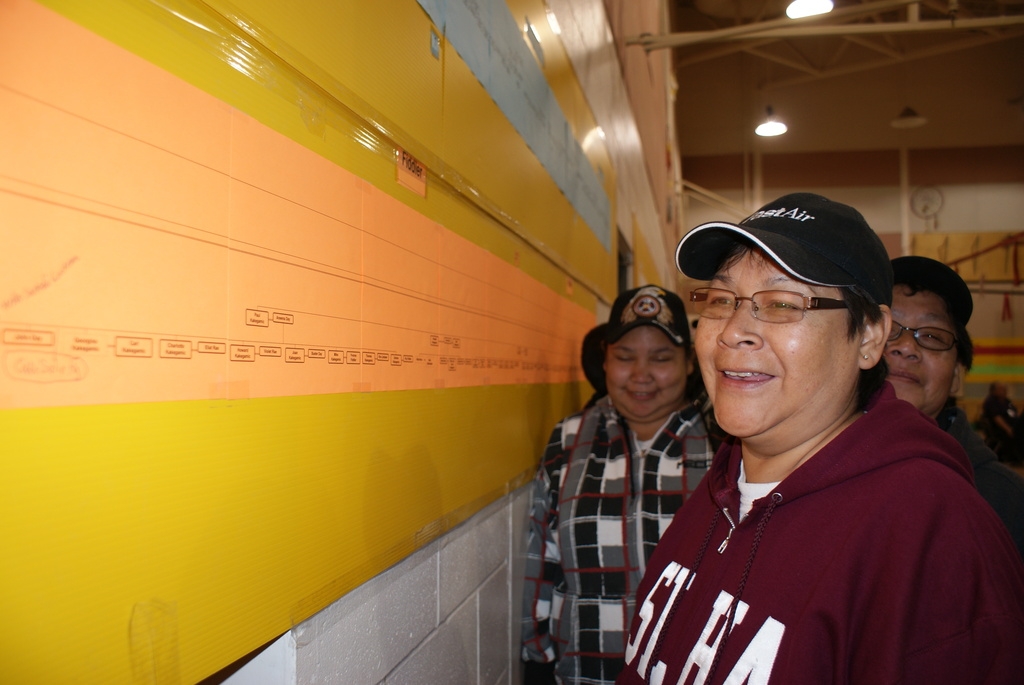 Family connections are branching up around Sandy Lake as members trace their lineage through family trees.
“We were trying to come up with something from as far back as we can,” said former chief Ennis Fiddler during the annual Nishnawbe Aski Nation Keewaywin Conference.
Fiddler originally began working on his own family tree about a year and a half ago and helped with the research and development of the community’s family trees over the past five months.
“Afterward, we figured out who their kids were and their kids,” Fiddler said. “The more you go down into later generations, the more there are.”
Fiddler pulled out a number of family tree charts and opened up electronic files and documents stored in his computer at his log home in the River area of Sandy Lake the morning after the Keewaywin Conference.
“At the first workshop we had six Elders – they were divided into three groups and we had facilitators to work with the Elders to figure this out with the names,” Fiddler said.
“The first workshop we held we had invited the chief and council and the three of them that came in ended up staying the whole day because they were really interested. (Current Chief) Adam (Fiddler) was right into it.”
The family trees were filled in over the past five months through the efforts of three facilitators, Ida Anishinabie, Violet Meekis and Moonias Fiddler, a group of Elders and various family members in the community and across the region.
“We used a computer program, Family Tree Maker,” Fiddler said. “I was doing my own family tree a year and a half ago. I was just taking my time.”
With the Treaty No. 5a commemoration fast approaching, Fiddler said the commemoration organizers asked if the community’s family trees could be completed for the commemoration, so he submitted a plan to council.
Family tree project ongoing process
“I asked three people to help out, who would be good talking with people and working on computers and we set up family tree workshops,” Fiddler said, explaining three workshops were held, with the first workshop held Feb. 6 and the second workshop held about three weeks later.
“The three facilitators each took a group and started with a name, ‘Who was his father and who was his mom,’ and that person, ‘Who was his father,’ so we went as far as we can to see how far they can remember.”
Once the Elders filled in the names as far back as they could remember, Fiddler said the facilitators asked them to fill in the blanks again.
“This person way back, how many kids did they have,” Fiddler said, noting the facilitators questions to the Elders.
“So they (Elders) named all these kids they had, who were their wives and what were their maiden names? Who were their kids?”
Fiddler said they eventually ended up with the basic formation of each family tree.
“We concentrated on what we could get as far back as we can,” Fiddler said. “We knew it would be easy to fill in the ones who are alive today. We wanted to ask the Elders about the ones from way back.”
The community’s family trees were displayed June 10 around all four walls of the Thomas Fiddler Memorial High School gymnasium, with the Fiddler family tree covering the largest space, on three walls.
“So the Fiddler people alone, 1,923 people,” Fiddler said. “So I would guess maybe between three to four thousand people that we have covered.”
Fiddler said they still have not recorded his children’s generation, such as Chief Adam Fiddler and their children and grandchildren.
“We are going to continue doing this,” Fiddler said, explaining the plan is to continue working on the family trees to make sure it is accurate and includes the latest generations. “At some point we will be presenting the family trees in their full scope. We are going to continue working on it because it is fun.”