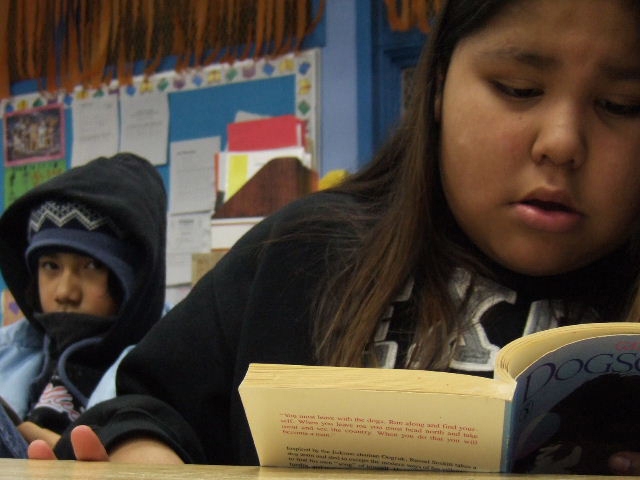 Ontario Lt.-Gov. David C. Onley came to Thunder Bay to help kick off the fifth annual Aboriginal Summer Reading Camp June 28.
At the launch, Onley was joined by Nishnawbe Aski Nation Grand Chief Stan Beardy.
“This is very important for my people, especially the children,” Beardy said. “We are trying to build the foundation in reading for our children. We are trying to instil in them the love to read.”
The Aboriginal Summer Reading Camp brings together more than 100 youth counsellors from communities across Ontario, who all bring a variety of perspectives and realities and thousands of youth in about 30 participating NAN communities.
“We are trying to get our young people interested in reading so that they will be successful in school and later in life,” Beardy said. “It is really important that these counsellors bring dreams to the young people, because the majority of the young people you see on the reserve, that is the only life they know.”
With the youth in many NAN communities facing challenges such as high unemployment, youth suicide, health issues and lack of education opportunities, Beardy said it is important for the counsellors to offer other realities to the youth and to talk about potential opportunities for the future.
“This program makes a significant difference in the health and well being of our young people,” Beardy said. “Many of NAN’s communities lack the basic resources to deliver proper education to our children. Programs, such as the Summer Reading Camps, are important in developing youth literacy and play an important role in the development of leadership skills.”
The Aboriginal Summer Reading Camps program was originally developed by former lieutenant governor James K. Bartleman as a pilot project in five fly-in communities in 2005 to empower First Nations children and youth to develop their literacy skills and to help overcome challenges they may face within their communities.
“Frontier College congratulates Nishnawbe Aski Nation on the kick-off of the camps,” said Sherry Campbell, president of Frontier College, the organization which manages the camps. “Thanks to the commitment of the Aboriginal community, the lieutenant governor and our dedicated volunteers, Frontier College is able to operate camps each year -- helping improve literacy skills and opening up new opportunities to youth in aboriginal communities. We look forward to future support and hope to continue the camps in the coming years.”
Over the past five years, the program has grown to include more than 40 communities across Ontario, Alberta, British Columbia and Quebec with a focus on reading and writing in a fun and active way. Last year’s program involved more than 2,200 children from NAN.
“After five years of the program, it continues to be not only a success, but a growing success,” Onley said, explaining that NAN’s involvement in the program has led to more knowledge of the needs of the north. “The partnership with NAN cannot be overstated.”
Perth Ontario’s Naomi Rogers and Webequie’s Kenny Jacobs have witnessed many successes over the first five years of the program.
“In my work in the communities I have definitely seen the importance of literacy skills, and how necessary they are to just daily life, whether it’s reading a prescription at the doctor’s office or being able to read your school textbook,” said Rogers, who now works at the O-Shkee Meekena Youth Healing Centre in Cat Lake. “After my first summer at the program, I came back because I really felt that the community had given so much time and energy and resources to me while I had been there.”
Rogers was pleased to see that one of the students she worked with five years ago has now graduated.
“Through her participation in the program, I really think it has helped her get a handle on her education and she has been able to stick through things,” Rogers said.
Jacobs, who enjoyed working with the youth in his home community of Webequie during the program and now lives in Thunder Bay, recalled an adventure down the river one summer.
“I took the southern counsellors out in the rapids once and my prop broke down,” Jacobs said. “We had to paddle for six hours.”
Although this is the final scheduled year for the NAN Summer Reading Camps, Onley and Beardy are currently working to re-establish the private-sector sponsorships to continue the program for a further five years.
“I am absolutely positive that this is no longer a short-term propostion,” Onley said, explaining that the responses from the sponsors have been “favourable right across the board.”