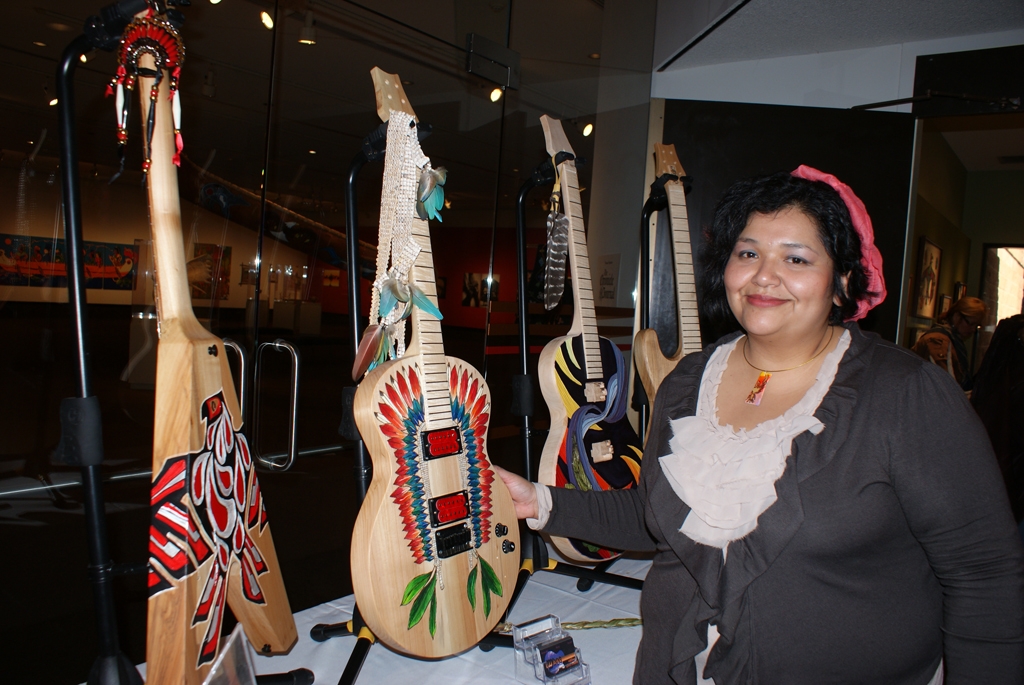 Elliott Doxtater-Wynn strummed a custom-made guitar during the opening weekend of the Thunder Bay Art Gallery’s Celebrating the Creators exhibition.
“Ironically, half of our customers so far don’t even play the guitar,” said Lisa Hanson, who creates images on her husband Erick’s custom-made guitars and is one of 53 Aboriginal artists and craftspeople featured in the April 3-May 23 exhibition.
“They are drawn to the artwork that is often customized for the individuals. When we do custom work and our clients give us artistic free rein to do what we wish, we end up coming up with symbols that are meaningful to them as an individual and often speak to their destiny and calling in life – and that is what resonates with them.”
Doxtater-Wynn and the Hansons took part in the Celebrating the Creators Arts and Crafts Sale April 10 after celebrating with hundreds of community members and many of the artists and craftspeople during the previous evening’s opening reception.
CBC Radio One Thunder Bay’s Adrienne Fox and Wawatay Native Communication Society’s Brent Wesley screened their portrait series I am Indigenous during the opening reception, which was attended by about 400 people.
“We’re trying to break stereotypes one image at a time,” Fox said. “So what we’re doing is photographing individual Aboriginal people from northwestern Ontario who are doing something diverse, something different, something that is beyond the regular stereotypes that we all know, whether it is being the Pocohontas type or the drunk Indian on some street in mainstream Canada.”
Fox, who has been working with Wesley on the portrait series over the past year and a half, is looking into pursuing grant money to travel up north and photograph people in remote fly-in communities.
“So that way you’ve got a really good cross-section of Aboriginal people,” Fox said. “If people know someone they really admire – it doesn’t have to necessarily be what we have in this project, we have an array of people – by all means give us an e-mail.”
The Celebrating the Creators exhibition is a snapshot of the art production of Aboriginal artists over the past year and the culmination of a year-long project lead by Jean Marshall, arts outreach liaison at the Thunder Bay Art Gallery, which involved travel to four remote fly-in communities and five highway-access communities.
Lakehead University art student Candace Twance had an acrylic on canvas piece in the exhibition called Surrender, which speaks about her struggles with anxiety.
“It’s kind of like an overbearing figure which came to represent what I was struggling with in my life at that time,” Twance said. “I think you just have to accept your life the way it is and work with what you have.”
Twance, who has had her work in the Thunder Bay Art Gallery before as part of the annual Lakehead University student exhibitions, enjoyed seeing her work in an exhibition with non-students.
“I think it’s really cool because when I was a little girl my parents brought me here and we always looked at art but I never thought my art would be here,” Twance said.
Artwork being showcased ‘overwhelming’ to viewer
Musician-actor Ira Johnson had three acrylic on paper pieces in the exhibition.
“Two of them are about the vision quests we go on to clear our minds and to get on a clear path,” Johnson said. “The idea of the starry sky and the night sky and the mountain tops, those are very harsh elements. When you look at them you don’t know what it is, but when you go on a vision quest and you clear your mind you actually see the harshness of those elements.”
Ahnisnabae Art Gallery owner Louise Thomas was overwhelmed with the work being created by Anishinabe artists.
“This is up my alley,” Thomas said. “It’s amazing to see this many artists together in one place. I’m just overwhelmed to see such wonderful work, to see what our artists are painting. It’s good to see what they see.”
Thomas admired the scale-sized canoe created by Gelineau Fisher.
“He got all the material right from the birchbark taking it off from the tree when it was the right time of year, which is June,” Thomas said. “He got the roots to put this together and soaked them.”
Metis artist Christi Belcourt also spoke about her exhibition, Identity, Land & Spirit, which runs from March 26-May 9 at the Thunder Bay Art Gallery, during the opening reception.
The work of four Aboriginal artists, Jane Ash Poitras, Rick Rivet, Joane Cardinal Schubert and George Littlechild, from the Thunder Bay Art Gallery’s permanent collection are also being featured in the Thunder Bay Art Gallery, as is the first juried Aboriginal art show from the region, WAABANDA-IWEWIN, which was originally staged in 1984 at the Thunder Bay National Exhibition Centre and Centre for Indian Art (Thunder Bay Art Gallery).