Ground broken on $1.5B Young Davidson Mine 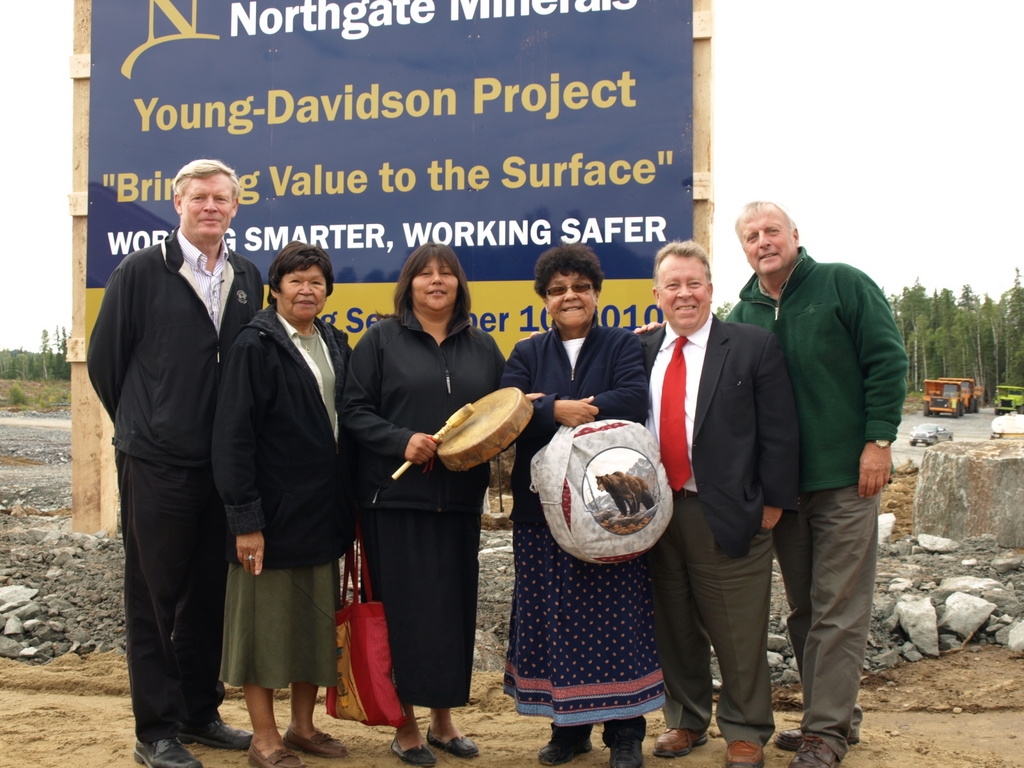 Matachewan First Nation welcomed a host of dignitaries to a ground breaking ceremony of the $1.5 billion Young Davidson Mine on its traditional lands Sept. 10.
Northgate Minerals Corporation officials were joined by provincial, federal, First Nation, regional and municipal leaders in officially celebrating the rebirth of the historic gold mine destined to provide hundreds of jobs in a development that should run for at least 15 years.
“With this ground-breaking, we are now proceeding on to moving earth, constructing buildings and starting to mine. It’s going to be very exciting here for the next year and a half and we are very happy with developments in partnering with Matachewan First Nation,” said Ken Stowe, president and CEO of Northgate.
Michael Gravelle, Minister of Northern Development, Mines and Forestry, said the Young Davidson mine is generating a substantial economic ripple and the project is having and will continue to have a profound economic impact on the region. He added in making these substantial investments and advancing this project Northgate Minerals has been a model corporate citizen.
“The McGuinty government commends the company’s commitment to environmental stewardship and sustainable practices in all phases of the mining cycle,” Gravelle said. “We also praise your commitment to keeping local communities informed and involved throughout the process, in particular, Northgate has been forthright and determined in its commitment to building relationships with local First Nations in the context of mineral development.”
Elder Alfred Batisse, of Matachewan First Nation, led the event in an opening prayer and the Matachewan Women’s drum group of Elder Marie Boucher, Elder Vina Hendrix and Elaine Daley performed during the ceremony.
Matachewan Chief Richard Wincikaby expressed his satisfaction at the positive relationship developed from the very start between Northgate Minerals and his community.
“Northgate has developed a good working relationship with our First Nation throughout the years. To date there are 28 members from our First Nation working full-time at the Young Davidson mine and this is just the start,” said Wincikaby.
David Ramsay, MPP Timiskaming-Cochrane, gave thanks to the Matachewan First Nation for welcoming everyone onto their traditional lands.
“This is especially important for all of our municipalities who are really going to benefit from the incredible economic investment that Northgate is making. I am also happy to make an announcement today that the Heritage Fund of Northern Ontario is providing a grant of almost $900,000 to the Matachewan First Nation to improve the road from the reserve to highway 66.”
Charlie Angus, MP Timmins-James Bay congratulated all those involved in the mining sector for sticking to their belief that better days would come along.
“This mine is extraordinary. To see the partnership with Northgate and Matachewan First Nation makes me particularly proud. As great as the gold and the copper and the diamonds are in the north, the greatest resource has always been in its people,” Angus said.
Town of Matachewan Reeve Beverly Hine called her community a boom town benefiting from the huge investment made at its doorstep.
“In Matachewan, upwards of 65 new homes will be built, many renovation projects and land sales have already taken place and several plans for residential, commercial and industrial development projects are currently under development,” she said.
Recent drilling results at the mine site have produced significant additional gold resources.
More than $1.5 billion will be invested towards operation and capital costs during the life of the mine and the initial capital cost of the mine is expected to be more than $340 million.
The new mine will provide 180,000 ounces of gold per year or a total production of 2.5 million ounces over the next 15 years, at a cost of $350 per ounce.
The mine will provide jobs for 600 people during the two year construction period and long term employment for 275 individuals.
The Young Davidson gold mine is located on the gold-rich Abitibi belt of northern Ontario, on the site of the historic Young Davidson and Matachewan Consolidated properties dating back to the 1930s. Northgate acquired the property in November 2005.
During mine development, the company worked closely with the various surrounding communities and in July 2009 signed an Impact and Benefits Agreement (IBA) with Matachewan First Nation, a member community of Wabun Tribal Council.