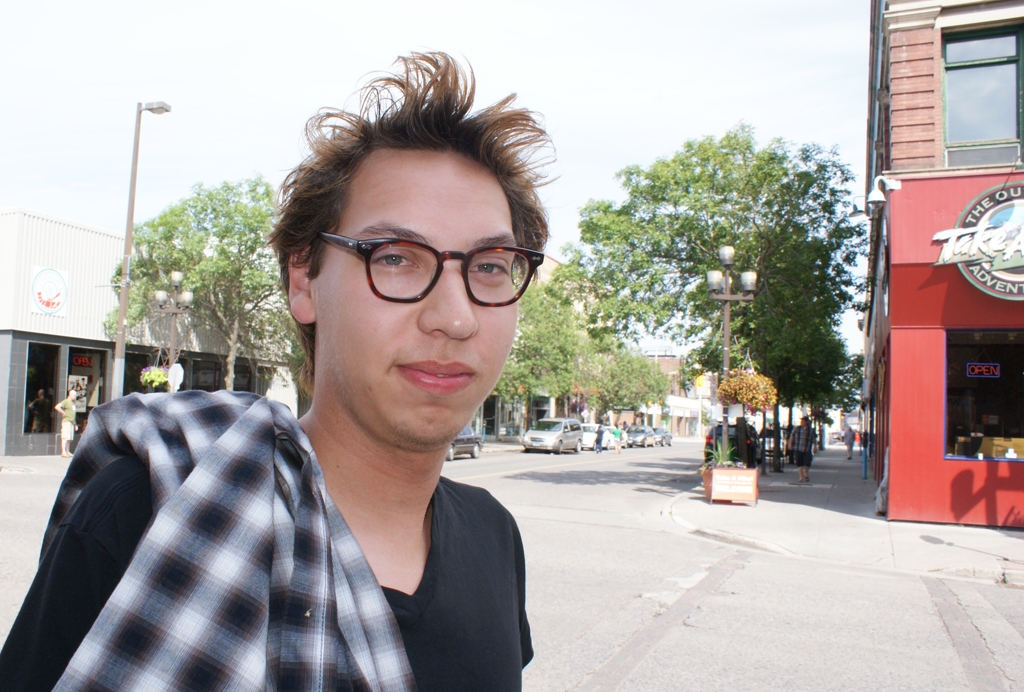 Lac Seul’s Tyler Angeconeb is itching to shoot a romantic drama next year in Sioux Lookout.
“Right now I am still in the early stages so I am keeping the story and the name of it under wraps,” said the Confederation College film production student who began shooting his own films in 2004 while still in high school. “I’m just working on the script now. It is still very early on but I do have the whole story all rounded out. I just have to put it on paper now.”
Angeconeb has produced three films over the past year while studying at Confederation College.
“I’ve made movies before but not in the way that I will be making this one,” Angeconeb said. “Over at the college you learn a more professional way of making movies, lighting, directing actors.”
Although Angeconeb had produced a number of films in the Sioux Lookout-area before he enrolled in the film production program last fall, he said they were point and shoot movies where “you just make the thing.”
“I was making short little (movies) and as each year went by I kept making more and more. My longest video is about one hour and nine minutes,” Angeconeb said. “Now with this film there is a lot more pre-production and more of a process to go with this film to make it more organized and more film-like.”
Angeconeb is pleased with the knowledge he has gained during his first year of study.
“In school you learn how to work with the actors,” Angeconeb said. “I now have more of a professional outlook on it.”
Angeconeb first became interested in directing films when he watched Steven Spielberg’s 1981 film, Indiana Jones and the Raiders of the Lost Ark.
“I was a little kid when I was introduced to it but when I was watching it, I thought to myself, ‘This is what I want to do. I want to tell stories like this,’” Angeconeb said. “I started watching more movies and I was like ‘Maybe directing could be the thing,’ and it just went from there.”
Angeconeb’s goal is to return to Sioux Lookout and shoot films utilizing local landmarks, events, actors and musicians.
“I know Thunder Bay is a real hot spot for making movies but I want to focus it away from Thunder Bay and try and make my movies in Sioux Lookout and make that the new local hot spot,” Angeconeb said. “You can’t do a movie without Sioux Mountain.”
Angeconeb is looking to incorporate the wide variety of outdoor activities in the Sioux Lookout area into his films.
“Sioux Lookout has a lot of potential,” Angeconeb said, explaining he has received a good response from the community about his plans. “I think it is a good place to start making a movie. It is a nice small town so you get a lot of access.”
Although Angeconeb has a long-term goal to eventually study acting and work as an actor, he is currently focusing on producing his films.
“The beginning process, the early stages of pre-production is where all your hard work goes into,” Angeconeb said. “The production – when you are shooting and on location – can give you gray hairs for sure.”
Angeconeb said the pre-production and production stages are fun, but he enjoys the post-production stage the most.
“I enjoy the post-production side of it more because when you are all done shooting and you are editing and putting it together, that is when it really starts to come together,” Angeconeb said. “So that has to be my favourite part of the whole movie-making process, watching the final piece and presenting it to the people.”
Angeconeb has an insatiable drive to get his films completed.
“It’s like an itch that won’t go away,” Angeconeb said. “It’s there, you know, write the ideas down, like OK I’m going to do this next and pretty much just focus on that and once it’s done I feel better. OK that is gone so I can move on to the next project. It is like an insatiable itch I feel, that I have to scratch constantly.”