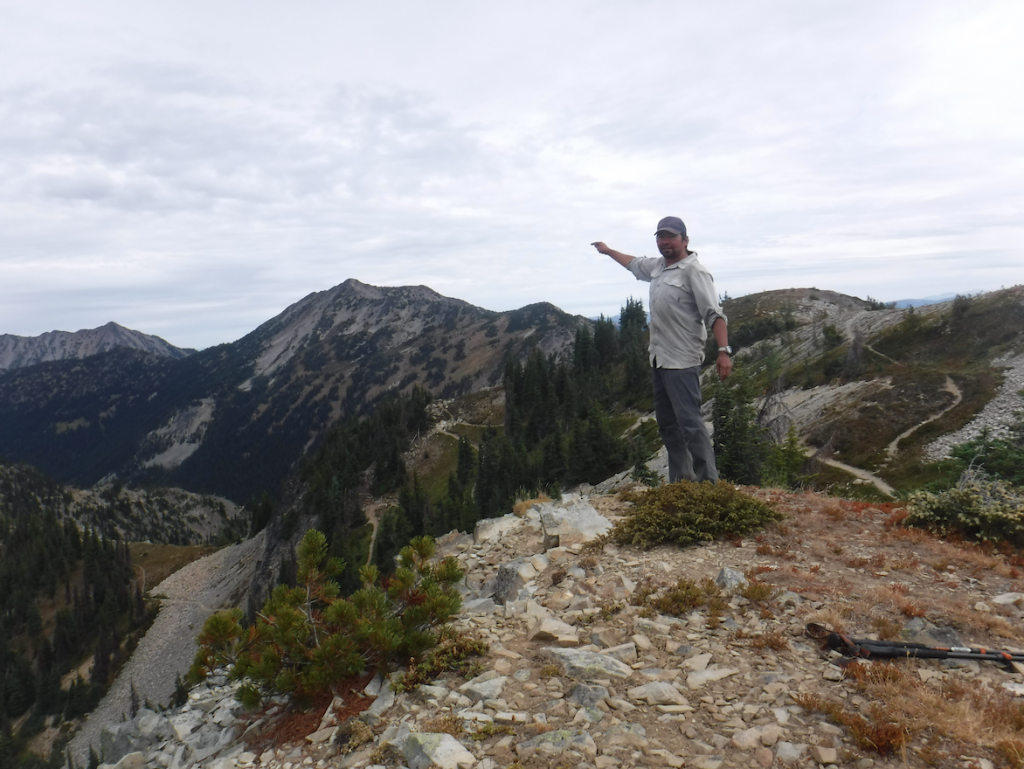 Muskrat Dam’s Joe Duncan stopped for photos at many picturesque sites during his 4,265-kilometre hike on the Pacific Crest Trail from Mexico to Canada over the past three summers. Submitted photo.

“It’s the longest hiking trail in the world and it takes the average person six months to hike,” says Duncan, a third-year Outdoor Recreation student at Lakehead University. “You fly down to San Diego and you take a bus out to the desert. There is a southern monument of the PCT and you start from there — it’s right on the Mexican border. My cousin dropped me off and I’ve got a video on Youtube of him filming me taking off.”

Duncan trained for about a month before beginning his journey in May 2015.

“And I just ate, ate, ate — when I left I was 210 pounds,” Duncan says. “It took around a month-and-a-half to go through the desert. After 800 miles you get to Kennedy Meadows. The High Sierras starts at Kennedy Meadows, that’s where trees are starting to come out and there is glacier water coming down. In the desert you are like 4,000 or 5,000 feet going over hills but in the High Sierras, every day you are going over a pass.”

“It takes six hours going up (the pass) and two hours coming down,” Duncan says. “It was difficult. You are hiking between 20 to 30 miles a day. You get into this routine — you wake up, you take your tent down, and you start walking.
Your mind really slows down out there, it gives you time to reflect on life and yourself.”

Duncan says he picked up supplies, mainly dehydrated food or canned sardines or Spam, every four days or so whenever he was near a small town along the route. He adds that a group of people called the Trail Angels provide supplies of food and water along the route to help the hikers.

“In certain areas of the Mohave Desert there are certain areas where there is no water, so they leave containers of water for hikers,” Duncan says. “And sometimes they leave a cooler there with snack food.”

Duncan also summited Mount Whitney, the highest mountain in the United States other than Alaska at 14,505 feet, during the 2015 leg of his journey.

“When you do a summit you start hiking at 2 o’clock in the morning,” Duncan says. “At that point I was getting altitude sickness. When you get altitude sickness, you have no appetite whatsoever, so in two or three days you might have one power bar.”

“In some areas everything was still covered in snow — it was deep, around four-feet, three-feet deep,” Duncan says about this year’s leg. “You’re in the High Sierras. Because of the altitude up there, it doesn’t melt until the sun is right on it.”

Duncan also ran into an unusual incident at a campsite in Oregon when a large creature stood outside his and another hiker’s tents at about 2 a.m.

“I was scared — it was probably the freakiest moment of my life,” Duncan says. “As a hunter you know when you hear deer or moose. All my hunting skills was telling me it wasn’t a bear, it wasn’t a caribou, it wasn’t a deer. If it was a bear, it would go after my backpack, but it just walked right by it.”

Duncan says he checked for tracks the next morning but couldn’t find any evidence of what had been walking around the campsite.

Duncan completed the Oregon portion of the journey in about four or five weeks.

“I got to the Bridge of the Gods (on the Columbia River) that divides Oregon and Washington State,” Duncan says. “The High Sierras (in California) was beautiful, and I would say Washington was next for how beautiful it was with the trees and the water.”

Duncan says it took about four-and-a-half weeks to hike across Washington to the Canadian border.

“It was an awesome feeling to complete it,” Duncan says. “That morning was the most I ever hiked. I got up at 4:30 and started hiking by 5 a.m. I got to the (northern) monument around 3 p.m. (on Aug, 25), took pictures, signed the log book. I had a quick lunch break there. Then I crossed into Canada to Manning (Provincial) Park, which was seven miles (from the border). So that day I did 27 miles.”

Duncan says he met people from all around the world during his journey.

“My trail name was Canada Joe, because the first thing people ask you is where are you from,” Duncan says.

Duncan plans to use his experiences on the PCT for a research project during his Outdoor Recreation studies.