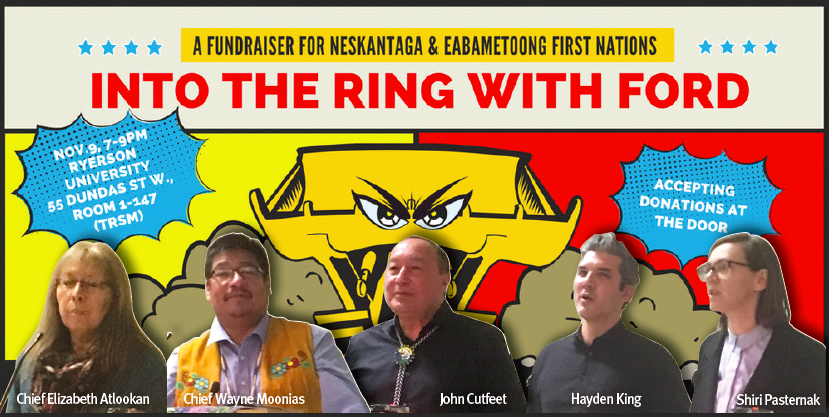 Nearly 60 community citizens from both Neskantaga and Eabametoong First Nations gathered for a fundraiser and rally against Ontario Premier Doug Ford’s recent statements about the Ring of Fire.

The event “Into the Ring with Ford” was held at Ryerson University in Toronto on November 9th. It was organized by the Yellowhead Institute, and was live broadcast on Wawatay Radio Network and Wawatay News Online.

Premier Ford said he would drive a bulldozer to the Ring of Fire himself to get the mining process started, without any concern for consultation from the First Nations in the area.

With the discovery of large chromite deposits, First Nation homelands in northern Ontario are now highly sought after. Extracting the chromite is a massive project that will open up the these lands for the first time; threatening the rivers, fish, wildlife and the way of life. The Ford government continues to ignore First Nations and is desperate to see this Northern Ontario mega project go ahead. Premier Doug Ford has even vowed to open up the Ring of Fire to extraction even if he has to “hop on that bulldozer" himself.

“Nothing is going to happen without our involvement, that is the bottom line of our message,” said Eabametoong Chief Elizabeth Atlookan.

Chief Atlookan was joined by Neskantaga Chief Wayne Moonias and KI’s John Cutfeet, all of whom gave passionate speeches about sovereignty, land use, consultation, and Treaty Rights.

“We are not anti-development. We just want to do it in the right way,” she said.

Chief Moonias said that his community has been in a state of emergency since 2013 due to a suicide epidemic. “And we have these politics and laws imposed on us by other people…they don’t understand us,” he said.

Moonias said that the province still needs free, prior and informed consent to move forward with any type of development in Neskantaga’s territory, “no government should be able to control another government,” he said.

“Free, prior and informed consent is not an option, it is something that must be done,” he went on to say. “We want discussions to take place in a meaningful way.”
Chief Moonias also explained that, for him, any changes in his community must be done with the full involvement and input of all the community’s citizens. “We want things done by the people and for the people,” he said. “They are the ones with a direct link to the land and to the culture.”

John Cutfeet, who’s a citizen of KI and has been at the forefront of the community’s plight against mining in his territory gave his full support for Neskantaga and Eabametoong. He told his communities story of resilience and determination and gave a message of hope and resistance.

“We have a mandate, a spiritual mandate, to protect the land,” Cutfeet said. “Land, air, water, spirit, they spell out ‘laws.’ And those are the directions we are given.”