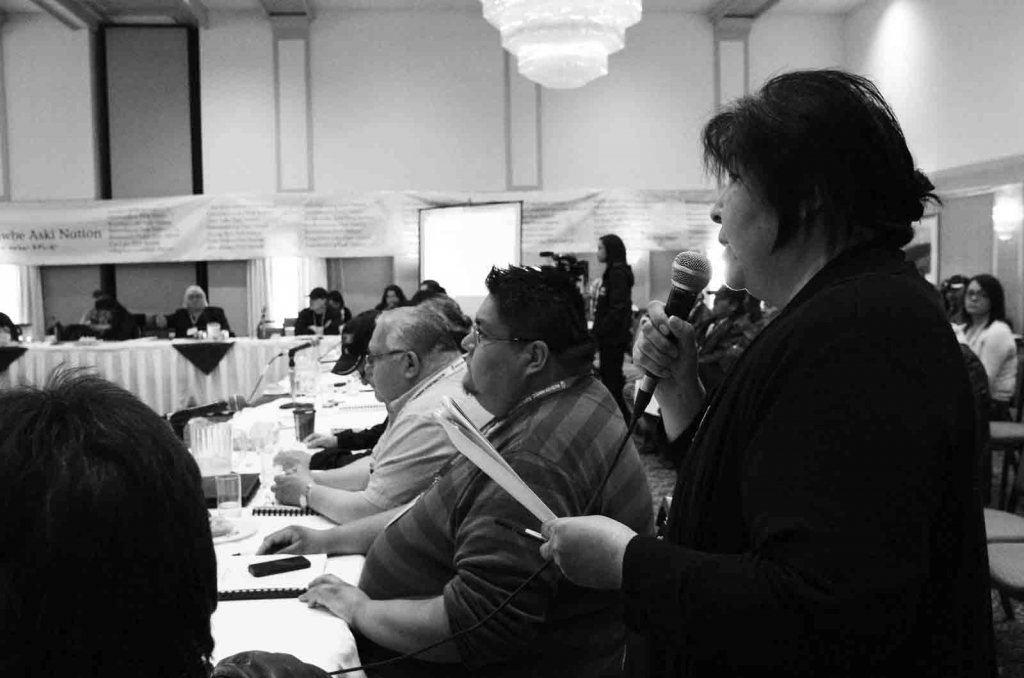 Nishnawbe Aski Nation chiefs rejected the federal government’s Bill C-33, First Nations Control of First Nations Education Act, during a May 6-7 gathering in Thunder Bay.
“Our First Nations have our own vision,” said Deputy Grand Chief Goyce Kakegamic. “We believe that the future of education in Nishnawbe Aski Nation territory is based on the vision we have on jurisdiction of education in our communities.”
Kakegamic said NAN has been holding discussions with the federal government over education for the past 10 years.
“And then for the last four years there was no movement,” Kakegamic said. “Now we know the reason why, obviously, because they have this hidden agenda with this (Bill C-33).”
Although Bill C-33’s title indicates First Nations control of education, Kakegamic said the bill in reality gives the federal government control of First Nations education.
“They will still be the ones who will be in the driver’s seat,” Kakegamic said. “And that is the problem that we have, who is really in control. If we don’t comply, the minister has ultimate control — they could come in and give it to the third party to administer our own program.”
Kakegamic said NAN is still looking to complete its education jurisdiction negotiations.
“We have a plan, we have a pathway and that is why we want to move forward,” Kakegamic said.
“A lot of these things that have been addressed in the First Nations Control of First Nations Education Act — quality of education and quality of teachers — is something that we want. But the issue is that the government has a lot of control.”
Kakegamic said the education jurisdiction plan would give First Nations control of education while the First Nations Control of First Nations Education Act would give the federal control.
“We would be in control,” Kakegamic said about the education jurisdiction plan. “We have a vision, we have a well developed plan, we have been negotiating with them for over 10 years.
All we’re saying is come to the table and finish it.”
NAN signed framework agreements for governance and education jurisdiction with the government of Canada in October 1999; draft agreements-in-principle for governance and education jurisdiction were tabled in June 2007 and final agreements-in-principle for the governance sector and the education jurisdiction were initialled in July 2009.
Mattagami Chief Walter Naveau said Bill C-33 does not reflect on First Nation languages or cultures.
“When you look at (Minister of Aboriginal Affairs and Northern Development Bernard) Valcourt’s presentation, it talks about language, culture, but in there it talks about English and French,” Naveau said. “They put in there monies for English and French. Where are we going to find our (own language) monies.”
Margaret Kenequanash, executive director of Shibogama First Nations Council, said her council does not agree with Bill C-33.
“I’ve always advocated that no legislation will undermine our principles that the Creator has given us: our identity, our language, our culture, our spirituality, our inherent laws,” Kenequanash said. “And we have a responsibility to protect the treaty right to education.”
Kenequanash questioned how quickly former national chief Shawn Atleo resigned due to criticism over his support of Bill C-33.
“If you truly believe in what you stand up for, then you stick it out,” Kenequanash said. “If that’s not the case, then I guess that’s not the case.”
Bill C-33 was introduced by the federal government on April 10 and has since been put on hold until the Assembly of First Nations clarifies its position following Atleo’s May 2 resignation.
Kakegamic said NAN will not stand by while other nations determine what is best for NAN community members.
“We are dealing with the future of education for our nation and it has to be done right,” Kakegamic said. “We call on the federal government to move forward addressing the needs of our people according to our treaty rights, and honouring our nation-to-nation relationship with the Crown as represented by the government of Canada. Education is a sacred responsibility that our chiefs have accepted, and expect the decisions we make to have a positive effect on our children’s future.”