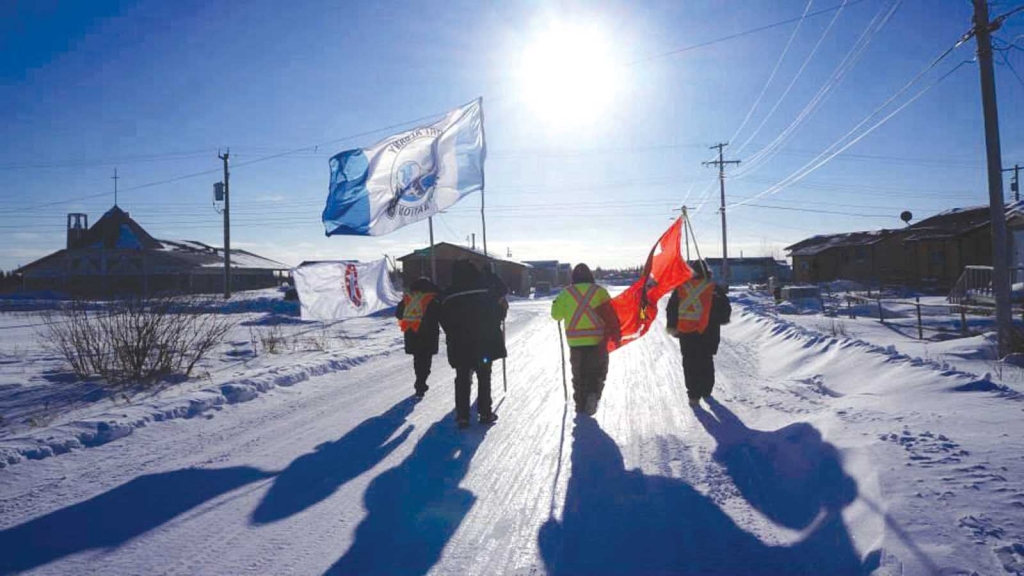 When the Reclaiming Our Steps Past, Present and Future walkers trek through the lowlands of the James Bay coast on their way to Ottawa, Danny Metatawabin said it is often in silence.
“When you walk, you reflect and you pray and you just continue walking,” the Fort Albany First Nation member said. “It’s mostly silence because we’re on a mission, we’re focused.”
That mission is to bring First Nations together and to meet with the federal and provincial governments to address the ongoing issues plaguing First Nations across the country – issues like housing, suicide, education and health care.
“I’m saddened by the issues,” Metatawabin said. “It seems like the governments are not listening to First Nation issues. And to the future, we’ll have resource development (in our territories). But where are First Nations in all of them?”
It is no coincidence that the purpose and goal of the walk are the virtually the same – if not very similar – to that of Attawapiskat Chief Theresa Spence when she began her hunger strike more than a year ago.
Believing in those reasons even back then, Metatawabin dedicated himself to supporting Spence throughout the hunger strike, which lasted 44 days.
He was Spence’s official spokesperson and spoke on her behalf to media, at chiefs’ meetings and rallies while she conducted her fast on Victoria Island.
Spence ended her fast on Jan. 24 2013 when chiefs at the regional and provincial level, and federal opposition leaders, signed a 13-point declaration of commitment. In the commitment, the leaders pledged to continue pressing the government to address the issues Spence fasted for.
“But a year went by and nothing really happened – there was no follow up or reports or engagement with the grassroots people,“ Metatawabin said.
He adds: “I knew deep down in my heart that there would be no follow up.”
Metatawabin recalls his words when the hunger strike ended.
“I said, just because the hunger strike was over, it didn’t mean the fight was over,” he said.
The idea of doing a walk came not long after the fast.
In March 2013, six youth Cree walkers and their guide completed a three-month walk from their community in northern Quebec to Ottawa. Called the Journey of Nishiyuu, Metatawabin was on hand to welcome the walkers when they completed their trek, which had grown to about 270 walkers.
Metatawabin said he was inspired “not only by the youth walkers but others who walked across the country for First Nations issues.”
And so on Jan. 4, Metatawabin and two other Attawapiskat residents – Brian Okimaw and Paul Mattinas – set out on the James Bay winter road. They were joined shortly after by Remi Nakogee.
On Jan. 8, they completed the first leg of journey when they passed through Kashechewan First Nation and Fort Albany.
Metatawabin said he was overwhelmed with emotion when he reached his home community, which welcomed the walkers with a celebration that included an escorted walk around Fort Albany.
“I feel relieved, I feel humbled,” he said.
The communities honoured the walkers with a feast.
When the walkers departed the next morning, they were joined by three Fort Albany members – Michael Knapaysweet, Brent Edwards, and Chief Rex Knapaysweet – who will walk with them to the next community of Moosonee.
They were also joined by another Attawapiskat resident, Albert Iahtail, who flew in to Fort Albany from North Bay to help complete the walk to Ottawa.
A call for support was answered when local community members offered to help them on the walk to Moosonee since their original helpers from Attawapiskat are now out of reach.
Metatawabin is moved by all the support they are receiving. It is like in the days of yore, he said, when their ancestors would help each other.
“That’s what this is about, reclaiming our footsteps. They owned the land, here on foot, or using a canoe or snowshoes,” he said.
“Nowadays most people don’t do that. We want to retrace our steps. We want to show the people that we are ready. We want our place here in Canada.”
The walkers reached Moosonee and Moose Factory on Jan. 14.
As of Jan. 20, the walkers were walking on Moose Cree’s winter road leading to Smooth Rock Falls, Ont., where they will begin to walk on the Ontario highway.
Metatawabin said the walkers continue to receive a lot of support, both from the communities they pass through.
“We have to help each other, and that’s what Elders have always strived for, for us to work together.”
Metatawabin expects for support to grow as they continue their journey.
“The support is picking up on our side on the James Bay coast,” he said. “I believe once we get to the highway, wherever we come out from, there will be more support for our cause.”
Regardless, Metatawabin will bear in mind who he is walking for, as he tells his wife:
“Inninowuk Osh-chi” – Cree for “For the people.”
“This is a new year, a brand new beginning, now’s the time to do,” he said. “I have to do this, I have to speak for the people.”
The journey can be followed by ‘liking’ the Reclaiming Our Past, Present and Future Facebook page. Metatawabin updates the page almost daily, adding photos and comments about the day’s events.
And more walkers have since joined.