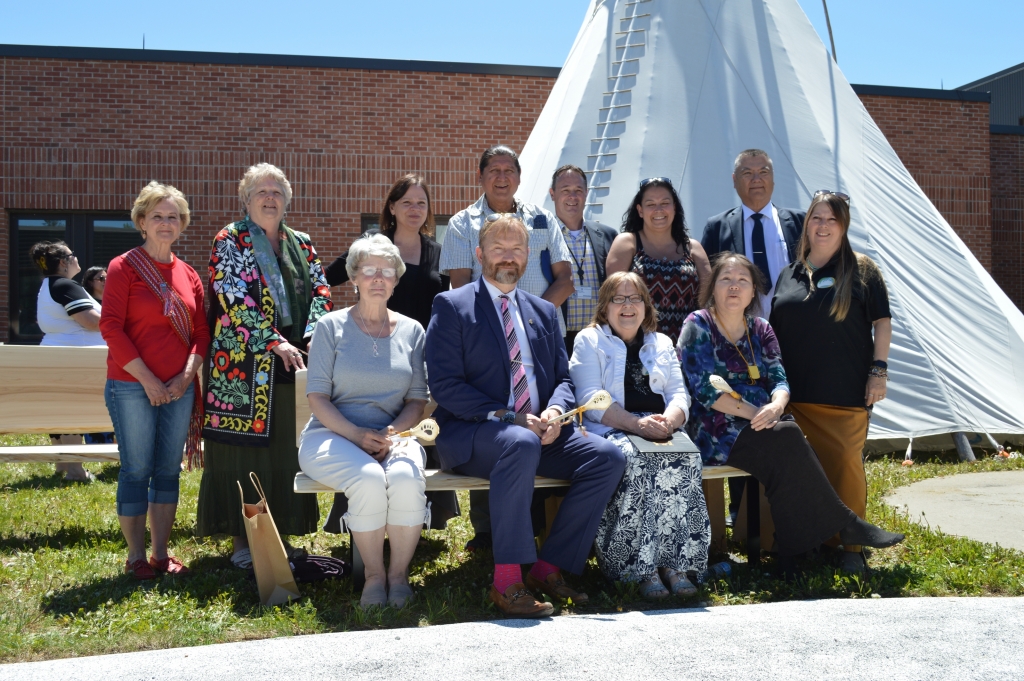 Health leaders and advocates gathered at the Temiskaming Hospital on June 6 for the Grand Opening of the new Mino M’shki-ki Indigenous Health Team office in Temiskaming Shores. The opening of this new Indigenous health care office was made possible by the collaborative efforts of several organizations in the Temiskaming area in northeastern Ontario. Mino M’shki-ki, a name selected by an Elders Council translates as ‘good medicine’ and the title is meant to reflect the type of modern health care services that will be provided in a culturally sensitive environment. The new office will provide primary health care but also traditional services in a culturally safe space that will include an area for smudging ceremonies and an outdoor teepee that can be utilized.

“I want to thank everyone, our Elders and political representatives that came here today to celebrate with us. This is the culmination of about five years of planning for Indigenous health services in the Temiskaming area that came about from the efforts of so many people,” said Anne Batisse, Executive Director of the Temiskaming Native Womens Support Group.

Batisse is also the Chairperson of the Leaders Circle, the governing body of the Mino M’shki-ki Indigenous Health Team. She explained that area partners and Elders groups have been working together for the past five years to develop ways to better serve the health needs of Indigenous people in the Temiskaming area. The four governing partners known as the Leaders Circle that made the new health office possible include Beaverhouse First Nation, Matachewan First Nation, the Keepers of the Circle (which is part of the Temiskaming Native Womens Support Group) and the Temiskaming Metis Community Council. The Leaders Circle also includes the active participation and leadership of an Elders Council.

“It was important for us to use the knowledge of our wisdom keepers or Elders to be able find solutions to help our communities. The knowledge they give us is the beginning of decolonization and reclaiming our culture and helps us to create projects such as this to better help our people,” said Arlene Hache, Keepers Of The Circle Program Developer and co-developer of the Mino M’shki-ki Indigenous Health Team. She participated in the event remotely on line.

“We are happy to be able to open our doors for our community. We want to create a welcoming environment for our clients and to ensure that everyone gets the care they need in a culturally safe space,” said Gaudreau.

“We are so honoured to be part of these beautiful celebrations and traditions on such as a great day. The discussions we have had and the agreements we have made to make all this possible have led to a strong partnership to providing care to local Indigenous people in the area,” said Mike Baker, CEO Temiskaming Hospital.

To commemorate the grand opening, Baker announced the gift of two commemorative wood plank benches from the Temiskaming Hospital and its staff.

“Health care is about people caring about people and this warms my heart to see this facility being built to care for people for generations to come,” said Dr. Paul Preston, Vice President of the North East Local Health Integration Network.

Elder Marcia Brown-Martel and past Chief of Beaverhouse FN also offered her message of congratulations and concluded the presentations ceremony with a round of traditional song and dance with the assistance of a Native women’s hand drum group.