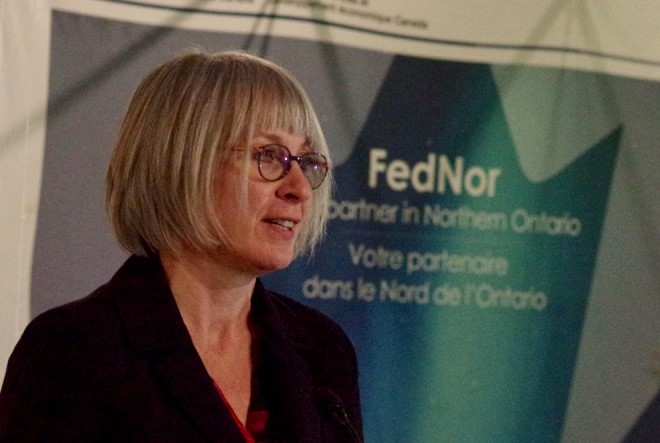 Health Minister Patty Hajdu spoke about a range of concerns about the COVID-19 global pandemic during a March 27 phone interview. Photo by Rick Garrick.

Health Minister Patty Hajdu says the issue of helping people who are flooded out of their communities during the COVID-19 global pandemic is raised in almost every cabinet meeting during a March 27 phone interview.

“I can understand the concern of community citizens around the need to prepare for things like the floods that happen every year,” says Hajdu, Thunder Bay-Superior North MP. “It comes up almost every single cabinet discussion that I’m at, the need to make sure we are still preparing for the kinds of seasonal disruption we see with floods or fires and the ability to have the capacity to respond to that.”

Kiiwetinoong MPP Sol Mamakwa, critic for Indigenous Affairs and Reconciliation, and Mushkegowuk-James Bay MPP Guy Bourgouin recently called for immediate help for Kashechewan, which has been evacuated 17 times over the last three decades due to flooding from the Albany River, to move to higher ground at the Site 5 relocation site about 35 kilometres away from the community so they do not have to evacuate to communities that are already strained by the COVID-19 global pandemic. Thunder Bay’s first confirmed COVID-19 case was announced on March 27 and the Porcupine Health Unit’s sixth confirmed COVID-19 case was announced on March 27. The Porcupine Health Unit serves the Cochrane District as well as Hornepayne, in the Algoma District, with the main office in Timmins and branch offices in Cochrane, Hearst, Hornepayne, Iroquois Falls, Kapuskasing, Matheson, Moosonee and Smooth Rock Falls.

“It’s almost like a double whammy of crisis that (Kashechewan has) to deal with when you have a global pandemic with COVID-19 and they have to address not only that (but) where they have to evacuate from the community and what are the options,” Mamakwa says. “So they’re kind of stuck between a rock and a hard place to be able to try to address the situation and make sure the community is safe and the community citizens are safe.”

Mamakwa says there is only a small window of opportunity to set up a tent city at Site 5, which is currently covered by forest.

“We have probably about three weeks before (the river) starts rising, so is there ample time,” Mamakwa says. “And I think that is the question, what is the will of the government to be able to do it.”

Hajdu says Indigenous Services Canada is working “very closely” with communities to make sure whatever response is put into place meets the needs of communities.

“If people are transported, the goal would be to transport them safely and to transport them in a way to a community setting where they could actually continue to practice self-isolation in a safe manner, including the supports that would be needed to ensure that,” Hajdu says. “I know that (Indigenous Services) Minister (Marc) Miller and the minister of Public Safety (Bill) Blair have their eyes on seasonal disruptions that happen as a result of weather or frequent
kind of disasters … that include floods and fires and we are working with First Nations directly to ensure we understand what their plan is and what they would like to see in terms of additional supports for their communities.”

Hajdu also emphasized that people need to take health precautions as the number of confirmed COVID-19 cases across the province and country continue to rise.

“When it hits a community the people that are most affected are the vulnerable people that have often times underlying conditions, obviously elderly people but not only elderly people, people who are middle-aged who have things like diabetes or pre-existing heart conditions or have had experience with strokes, or who have a lower immune system,” Hajdu says. “So I think it’s wise for communities to be thinking about how they ensure that they limit the amount of traffic for their citizens while also keeping their eye on making sure they can get essential goods and services into the community.”

Hajdu says the federal government has been advising communities to limit the movement of their citizens and to practice social distancing and self-isolation.

“We need to realize we could all be vectors of this disease — the symptoms are very mild for some people,” Hajdu says. “What we are really trying to impress on all Canadians is there are things we can do individually and collectively to protect those people in our community who would be very ill if they were to contract this illness.”

The federal government announced the details of the $305 million Indigenous Community Support Fund on March 26. It is designed to address immediate needs in First Nations, Inuit and Métis Nation communities related to COVID-19.

The new funds can be used for measures including, but not limited to: support for Elders and vulnerable community citizens; measures to address food insecurity; educational and other support for children; mental health assistance and emergency response services; and preparedness measures to prevent the spread of COVID-19.