Under The Northern Sky: Lest We Forget 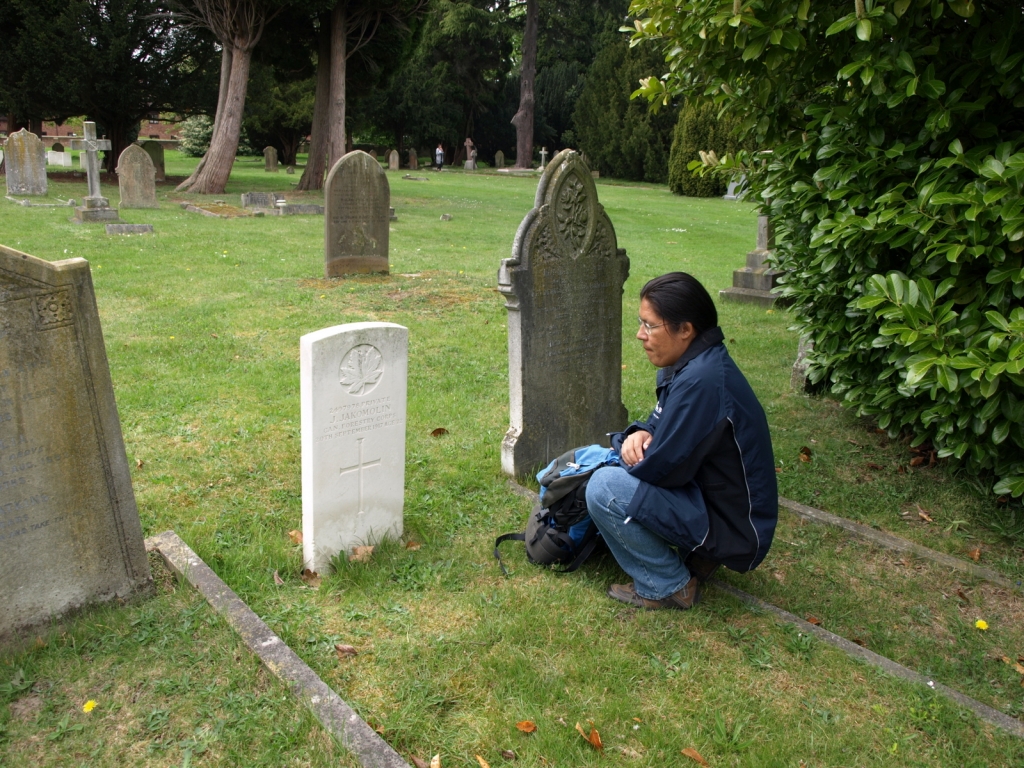 John Chookomolin's final resting place is in St Jude's Cemetery in Englefield Green, UK, a small community on the outskirts of the city of London, England. Here we see Xavier Kataquapit at the grave of his great grandfather during a visit to England.

Remembrance Day went by and once again I found myself in sadness for those who lost their lives in war. In the Cree language we have no word for ‘war’, the idea of conflict that involves hundreds or millions of people. Instead we call it ‘Mah-shi-keh-win’ which translates to ‘fighting’. We use the same word to describe two people fighting or to talk about either of the world wars. The Great War and the Second World War took the lives of millions of people as did subsequent conflicts and wars throughout the 20th century. Indigenous people participated in many of these wars and I have been impacted personally. During the first world war, my great grandfather John Chookomolin and grandfather James Kataquapit both were taken from Attawapiskat and the shores of James Bay to be shipped across the ocean to England in 1918.

James returned but John lost his life in England as a result of the Spanish Flu. That era and the time of the Great War runs deep in my emotions this year as it is sad to realize that there are still wars raging across the planet and there is a pandemic that is much the same as the one that killed my ancestor in 1918.

We have for the most part glamorized war and promoted it as a necessary means to fight evil. We have seen wars conducted for riches, lands, resources and with competing ideologies. It is usually started from the seeds of inequality and injustice and ends with the sacrificing of innocent lives. It has to do with greed and stupidity because in the end, the poor lose everything while the rich profit off the spoils. There is nothing just about war. All it does is take the lives of generations of young people away from us. Too few, with too much wealth and too much power rule this world and there is a continuous and organized push by these forces to create fascist and authoritarian governments that are anti-democratic. It is a cycle we constantly feed that continuously creates more inequality and plants the seeds of new conflicts for the future.

Right now I see the pandemic being used by fascist elements with protests that combine anti-mask, anti-vaccine, anti-democratic and anti-science movements that draw in vulnerable people of the public. These movements can be dangerous for democracy because they are disguised as being socially conscious but are based on conspiracies. Surprisingly a lot of good Christian people are swept up in these organized fascist movements and that is sad. Most Christian people I know do not condone anti-democratic action, violence, lies and hateful ideals. However, some are swept up with the lies and disguised intentions of these hateful groups.

Right now we see a huge struggle by the Democratic Party in the United States as they get ready to move into power after winning the most recent election. These are people who won this election fair and square yet they are being impeded in their move to the White House. Fascist elements are using all the old tricks of telling big lies, claiming voter fraud and trying to use the courts and legal system to deny results of this democratic election.

We are living in dangerous times with fascist and authoritarian movements all over the world doing their best to whittle away at democracy and in many cases using this terrible and ferocious pandemic to promote anti-democratic movements.

During this time of remembrance I realize there was no good reason for either of my grandfathers to have been taken from their land and families to fight in a war that only ended with horrible destruction and an enormous loss of life. Right now to honour all those who were killed in wars it is up to us to stand up for democracy and fairness. We must honour those who fought for our modern freedoms by protecting scientific and medical truths and ignoring dishonest conspiracies and outright lies. It is up to us to listen to the virologists, epidemiologists and medical experts so that we can work with each other by wearing masks in public places, staying two meters apart and washing hands often. We need to convince our governments that it is better to take all precautionary methods to defeat this virus and to support vaccine development so that we can get through this pandemic.