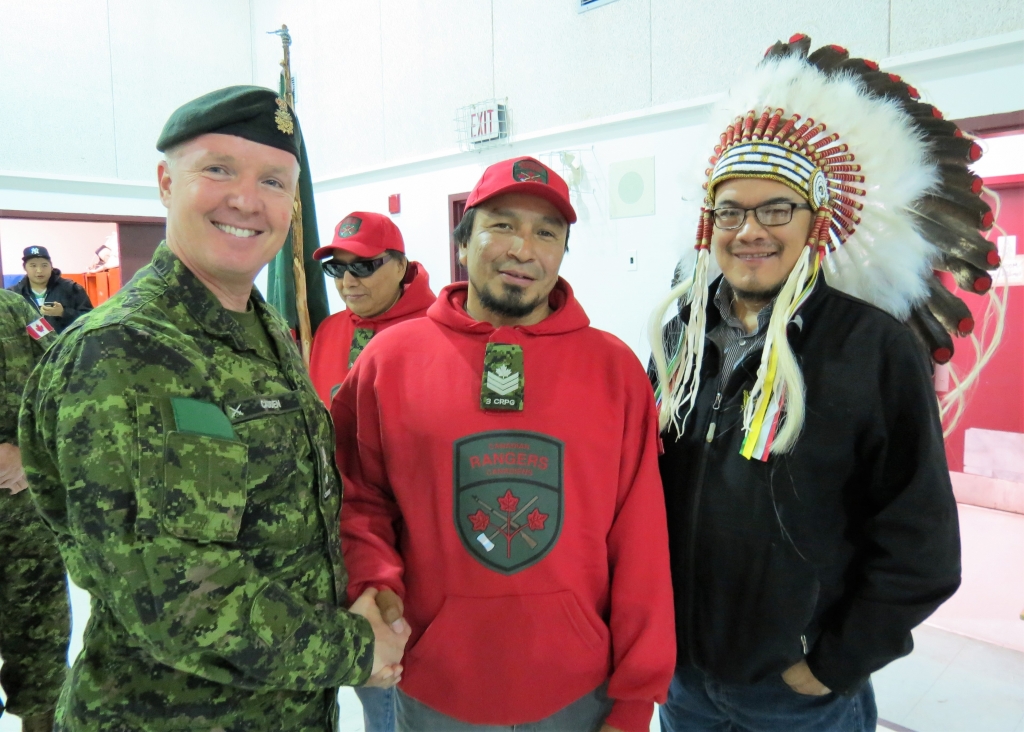 A remote community in the Far North of Ontario now has its own Canadian Ranger patrol, only four months after Rangers from other communities flew to it to help during a youth suicide crisis.

“I’m excited, the community is excited,” said Chief Johnny Yellowhead of Nibinamik First Nation. ‘It’s a historic moment for my community. We’ve been wanting the Canadian Ranger program for a long time. They can do a lot for us.”

Nibinamik, also known as Summer Beaver, is a fly-in Oji-Cree community of about 350 people, located 500 kilometers north of Thunder Bay.

During the summer the community faced a youth suicide crisis and asked for outside help. In an unprecedented response, the Canadian Army flew Rangers from several Northern Ontario communities to Nibinamik where they remained for parts of July and August, during which they patrolled around the clock to prevent children committing suicide and provided a range of activities to keep young people occupied. There were no suicides while they were in the community.

At the same time, Rangers, who are part-time army reservists, responded to a similar situation in Wapekeke, another remote northern community, where no suicides occurred while they patrolled.

The army began recruiting Rangers in Nibinamik last month and formally named them a patrol this month. The status of patrol was marked by a parade attended by the general commanding the army in Ontario.

“The ceremony today was very different (from a usual military parade) and it very much typified the Canadian Rangers organization,” said Brigadier-General Stephen Cadden. “It was understated and I thought it was wonderfully appropriate.”

The Rangers, wearing their new red hoodies and ball caps, formed a circle in the gymnasium of the school. Two community citizens sang an honour song. There were very brief welcoming speeches. Rank badges were presented to the patrol’s new leaders. The spectators applauded and then everyone joined the general, his staff, and students in an informal game of broom ball.

“You are all now part of our team,” General Cadden told the parade. “Your training as Rangers will allow you to help your own community and, if necessary, to go and help other communities. You are a key part of helping communities here in the North and we are going to be able to rely on you in the future as you go through your training.”

There are now 650 Rangers in 24 remote and isolated First Nations across the Far North of Ontario. Last year they saved 32 lives in 26 successful search and rescue operations across the North. They also assist in evacuating communities threatened by floods, forest fires, and other emergencies.

In a prepared statement Grand Chief Alvin Fiddler of Nishnawbe Aski Nation (NAN), which represents 49 First Nations, welcomed the new patrol in Nibinamik, noting that the exceptional service of Rangers in Ontario has been recognized with medals, awards, and commendations.

“This summer,” he said, “the Rangers answered the call when two of our communities, Wapekeke First Nation and Nibinamik First Nation, were thrown into crisis due to high rates of suicide and suicide attempts. They were quick to mobilize and provided these communities with a sense of security.

“We value our relationship with the Canadian Rangers and are encouraged by the expansion of patrols in Nibinamik and across NAN territory. We are especially encouraged with the growth of the Junior Canadian Ranger program, which is having a positive influence on our youth.”

The Junior Rangers is a culturally appropriate army program for boys and girls aged 12 to 18 in Canada’s remote communities. In Ontario, there are more than 1,000 Junior Rangers in 20 First Nations.

The addition of a new Ranger patrol in Nibinamik will increase the army’s ability to respond to emergencies, General Cadden said. “It’s not so much about having more Rangers but having Rangers in the right place. With a patrol in Nibinamik we have extended the range that we can offer rescue services and emergency services.”

Many of the new Rangers in Nibinamik will fly south before the end of the year for basic training at the army training base at Meaford, near Owen Sound.

“That’s something we are looking forward to,” said newly promoted Sergeant Paul Oskineegish, who, in keeping with Ranger tradition, was elected by his fellow Rangers to be their first patrol commander. His community, he said, needs better organized responses for search and rescue when local people get into trouble while on the land.

“We want to use the training and equipment the army can give us to do more in those situations,” he said. “The Rangers are going to be good for my community.”