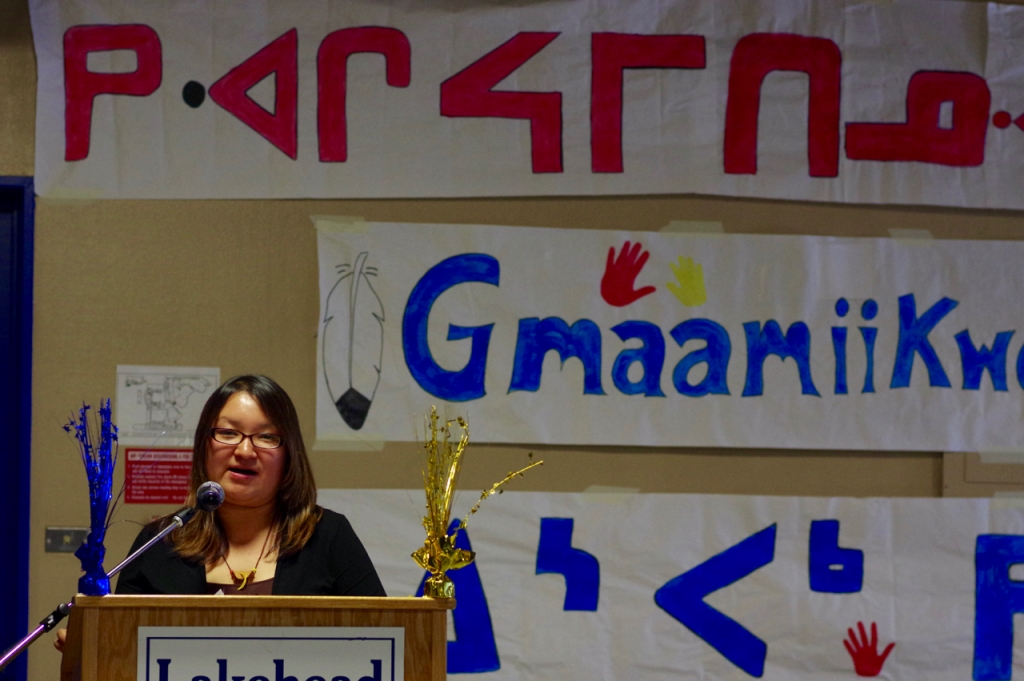 “I still haven’t officially graduated — I still have a winter course,” Hartley says at the NLIP Recognition of Achievement Dinner. “I feel good that I have finished these courses here.”

Hartley says it was a “great challenge” to learn about teaching the Native language during the four-year NLIP, which is the only program in Ontario with a mandate from the Ontario College of Teachers to provide teacher certification in Algonquian languages.

“There was a lot of times that I felt like I couldn’t finish, but I just kept going,” Hartley says. “I didn’t know what to expect when I first came here, but I had an idea of what I came for — to learn new ways of how to teach my language and to learn different traditions and cultures.”

Hartley says she has not yet reached her goal of learning how to teach her language.

“I am not quite done yet, but I will succeed in what I have started,” Hartley says. “I still have a long way to go and learn more ways to become a fluent Oji-Cree speaker.”

Hartley’s son attended day camp at Lakehead University while she was attending classes throughout all four years of study in the NLIP.

“My son was four years old when I started — now he is eight years old,” Hartley says. “He really enjoys coming to school and being in day camp. He is already looking forward to next summer, but I am not sure what will happen.”

Wabaseemoong’s Patricia McDonald and Wikwemikong’s Louise Recollet were also celebrated for completing their fourth year of studies during the Recognition Achievement Dinner.

“It feels great,” McDonald says. “I started the program back in 2008. I took some time off and then I decided to come back this year to finish year four.”

McDonald plans to start teaching again after completing the NLIP. The NLIP provides graduates with the necessary knowledge, skills and qualifications to instruct Native language as a second language.

“I was a teacher for about five years, but then I started working in the medical field,” McDonald says. “I would like to go back to teaching.”

Constance Lake’s Florrie Sutherland says it is “wonderful” to celebrate another cohort of NLIP graduates. She has been instructing in the NLIP for about 25 years.

“I love the work, I love to teach, I love what I see, I love the accomplishments, their goals, their achievements,” Sutherland says. “And I love the fun.”

“It stays in the child’s mind when you say it,” Sutherland says. “When you make a mistake, the child doesn’t forget. So it is very important that the language is spoken correctly.”

Sutherland says the NLIP classes are conducted only in the Native language.

“There is no English allowed,” Sutherland says.

Sutherland says the students understand each other even though they are from all across Ontario.

“I introduce myself in my language in Cree,” Sutherland says. “After I ask the students: ‘Do you understand what I am saying.’ And they all say yes. It’s almost the same — Cree, Ojibwe and Oji-Cree.”