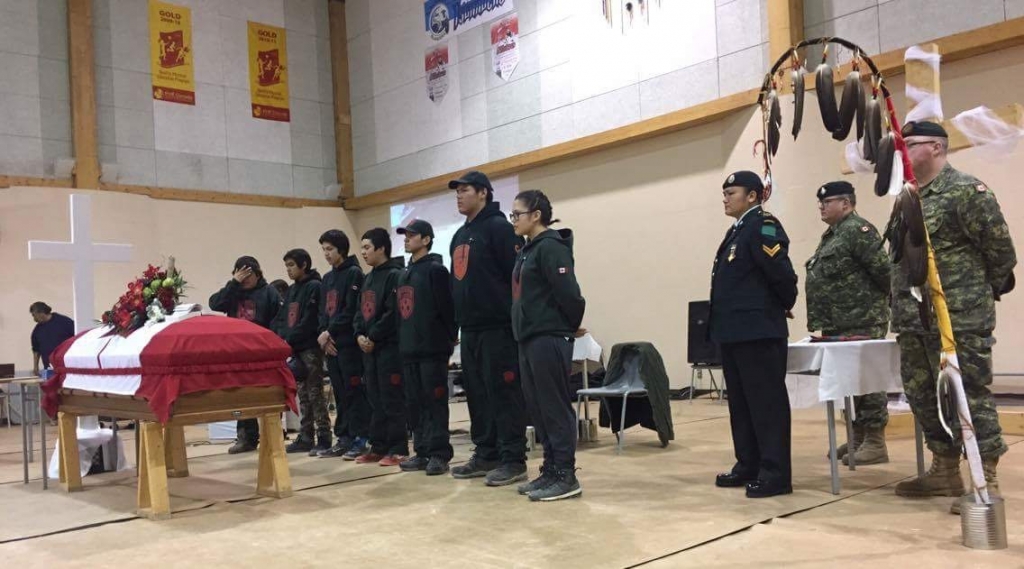 Junior Canadian Rangers and members of the Canadian Armed Forces paid tribute at the funeral on Saturday for a Junior Ranger who committed suicide in Fort Albany, a small Cree community on the coast of James Bay.

Garrett Tomagatick, 13, died on October 15, the result, according to his family and others, of bullying and constant comments about problems with his weight. His death occurred after his sister, Thomasania, 27, took her own life on March 6 of last year. Garrett’s death was the fourth suicide in Fort Albany this year.

Suicide in the leading cause of death for indigenous youth aged 10 to 14 in remote First Nations across Northern Ontario.

One of the few bright moments in Garrett’s life, according to his family, came from his membership in the Junior Canadian Rangers, a Canadian Armed Forces program for boys and girls aged 12 to 18 in remote Northern communities.

“His family said the Junior Canadian Ranger program was important to Garrett after his sister passed away last year,” said Captain John McNeil, the Canadian Army officer who commands the 750 Junior Rangers in 20 remote First Nations across the Far North of Ontario.

“They said the program itself and the kids who are involved in the program were instrumental in his healing. They said he enjoyed being a Junior Ranger very much. They said he was very happy at this year’s Camp Loon and it was because of the camp that he was the most excited he’d been in a while.”

Camp Loon is an annual summer advanced training camp for Junior Canadian Rangers from across the North. The photo the family released to the media after Garrett’s death showed him in his Junior Ranger uniform taking part in the traditional arts program at the camp.

The military paid tribute to his memory at his funeral. Junior Rangers flanked his coffin, which was covered with a Canadian flag, in the gymnasium of the school in Fort Albany. There were also members of the Armed Forces, including Corporal Jennifer Spence, an aunt, who flew to Fort Albany for the funeral.

Master Corporal Hannah Nakogee, the Canadian Ranger in charge of the community’s Junior Ranger patrol, organized a community candle light vigil that was held after the funeral and the traditional feast for the dead.

“It was held because we wanted to facilitate dialogue,” he said. “Bullying seems to be a big problem in the community. The kids are talking about it but many of the adults do not seem to be talking with the kids. When issues are reported to the school they do what they can but they say they get a poor response from the parents when they are told about them.”