DGC Achneepineskum fasts for the homeless 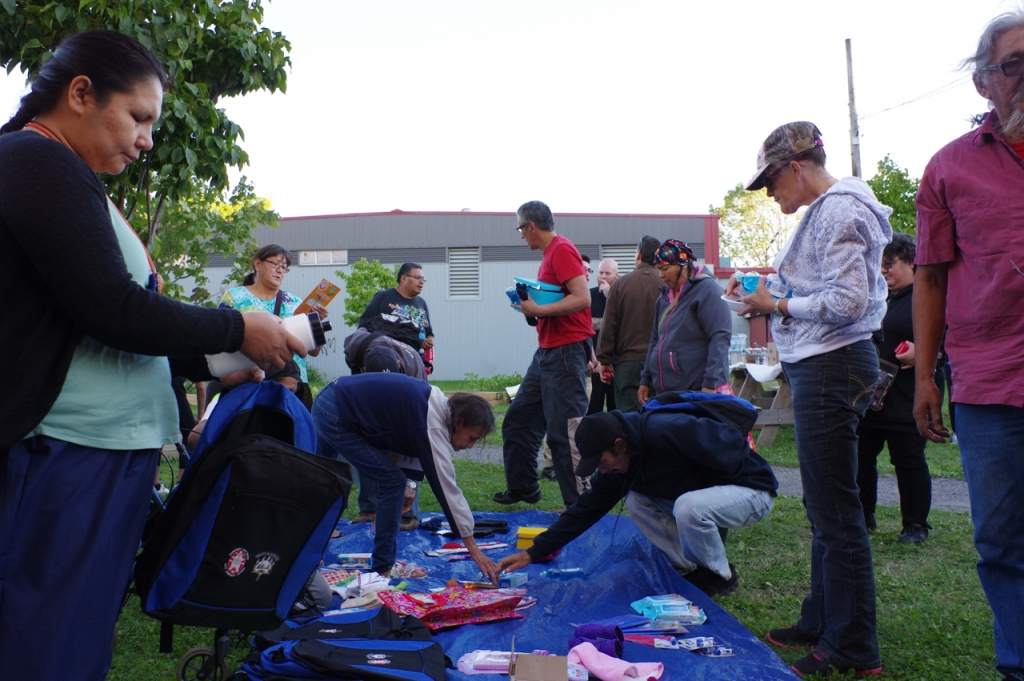 Community members participate in a giveaway after the 48-hour fast to raise awareness of the homeless was completed on Sept. 19 on the grounds of Shelter House Thunder Bay.

Deputy Grand Chief Anna Betty Achneepineskum was encouraged by her experiences after completing a fast and 48 hours of prayer on the grounds of Shelter House Thunder Bay.

“It was very encouraging to see the support we were getting from the community,” Achneepineskum says. “I saw the interaction between the staff and the (clients), so it was very encouraging to see that there’s very nice people working here. And there was a lot of traffic going through here. Apparently that (path near the fast area) is a shortcut that’s used quite often.”

Achneepineskum says despite all the noise she heard in the area, including people who were cursing and swearing and others who may have been inebriated, nobody approached the fasting site.

“The residents seemed to be encouraged that someone was coming here to address this issue,” Achneepineskum says. “Hopefully now our next step is to go to the government to say that this place needs to be enhanced in terms of programming for the clients. It was sad to hear that every day they rely on the donations to feed the 200 people that come through here every day to be fed. And they max out in terms of providing shelter for people in the night.”

Achneepineskum fasted with Shelter House Thunder Bay executive director Gary Mack and Leona Achneepineskum, whose brother died on the streets of Thunder Bay about two years ago. They went without food and water for the entire 48-hour fast.

“It was amazing,” Mack says about the fast. “We had a sweat lodge before and after. I’ve just gotten out of the sweat lodge a few minutes ago and it was a very powerful experience.”

“We had lots of visitors, drummers, singing — it was amazing,” Mack says. “Lots of people (were) stopping by. We of course were not able to talk with anybody, but it was great.”

Mack says he asked Achneepineskum if he could fast with her when she enquired about fasting on the grounds of Shelter House Thunder Bay.

“She was very gracious and allowed me to join her,” Mack says. “We were doing it to raise awareness and to really pray for all the people we have lost and the people that are suffering right now.”

Leona Achneepineskum joined the fast due to the loss of her brother.

“He died on the streets here in Thunder Bay,” Leona says. “He was into addictions and I wanted some peace for my family and some healing for my family. So while sitting here I found that he had a family here at the shelter. A lot of these people stay together and they help each other and I saw that while sitting for 48 hours. And that puts my heart at ease.”

Leona says it was an honour to be a part of the fast.

“Like every other ceremony, it is different for everybody,” Leona says. “The fast for me was an eyeopener. I saw a lot of things that I didn’t know went on here in the city and I’m really happy that I was able to participate.”

The fast was also held to honour the memory of Leslie Moonias and Otis Perkins, recent victims of violence, and all the people who have been lost over the years.

“Homelessness is all-too prevalent in Thunder Bay and many urban centres across northern Ontario, and vulnerable members of these communities are often victims of violence and other forms of abuse,” Achneepineskum says.
“There many contributing factors including rigid policies on housing and social assistance, court and legal issues, racism, mental health and addictions. This 48-hour fast will help raise awareness about the need for services and resources to help the less fortunate.”

NAN supports the work at Shelter House Thunder Bay, and staff and members of the NAN executive council volunteer at monthly soup kitchens.